Like many other people, in Andalusia we knew already the classical sights, the most famous cities like Granada, Seville or Córdoba. However, Andalusia is much more than its crown jewel cities, there are numerous charming small towns, where you can get to know better certain characteristics of the lifestyle in Southern Spain. Places with wonderful architecture and amazing places to eat at!

The route in Andalusia we like to suggest you now goes through 8 villages and small towns. This route is officially called the Caminos de Pasión (Routes of Passion), where we can constantly face the contrast between Arabic and Christian architecture.

Alcalá la Real is the only small town of the route that is found in the Province of Jaén, exactly half way between Granada and Córdoba. This town is famous in the area for the fantastic olive oil produced here, so you can’t leave Alcalá la Real without taking part in some olive oil tasting. You will get to know the different categories the oil is classified into and hopefully acquire a taste for it.

The hilltop castle of Fortaleza de la Mota is unarguably the most emblematic place in town. As locals say many people drive from Córdoba to Granada (or vice versa) and then instantly stops the car when they see the fortress asking themselves how on earth they didn’t plan to visit that.

When we arrived in Priego de Córdoba, locals welcomed us saying “welcome to the most beautiful village in Andalusia”, and we were thinking how presumptuous they were. After visiting Priego, after strolling in the streets of the Barrio de la Villa neighborhood with wonderful white alleys full of flowers, after seeing the marvelous fountains and enjoying the calm and peaceful atmosphere of this village, we had to recognize that they were right, Priego de Córdoba is one of the most beautiful places in Andalusia. 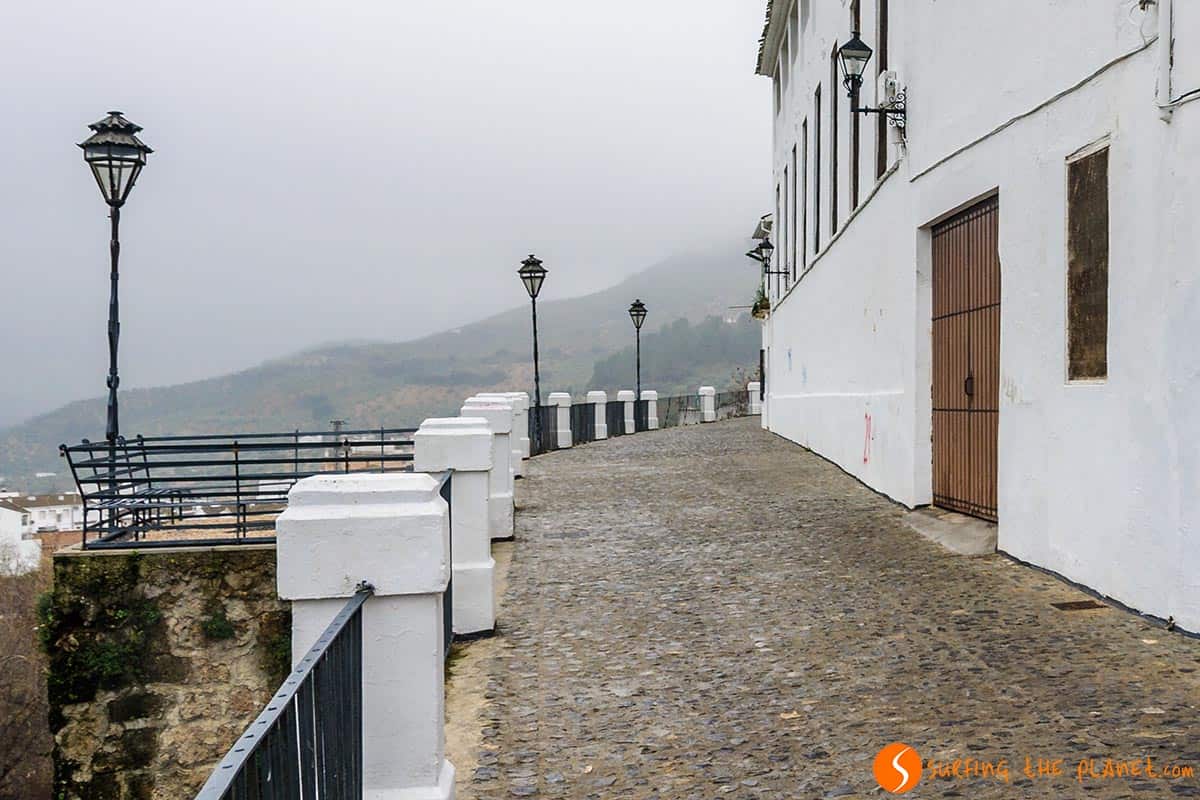 Apart from its beautiful churches, its medieval castle and the olive oil museum, we would like to recommend you a really special museum we visited here, the Museum of Passion. This very strange museum surprisingly does not focus on the religious traditions of the Holy Week in Andalusia, but it’s related the scientific investigations related to the Shroud of Turin, a linen cloth which is by some believed to be the shroud of Jesus Christ. The results of the investigations exposed here show us how possibly the face of Jesus was, how his spine crown looked like. It’s quite freaky, but very interesting to visit. 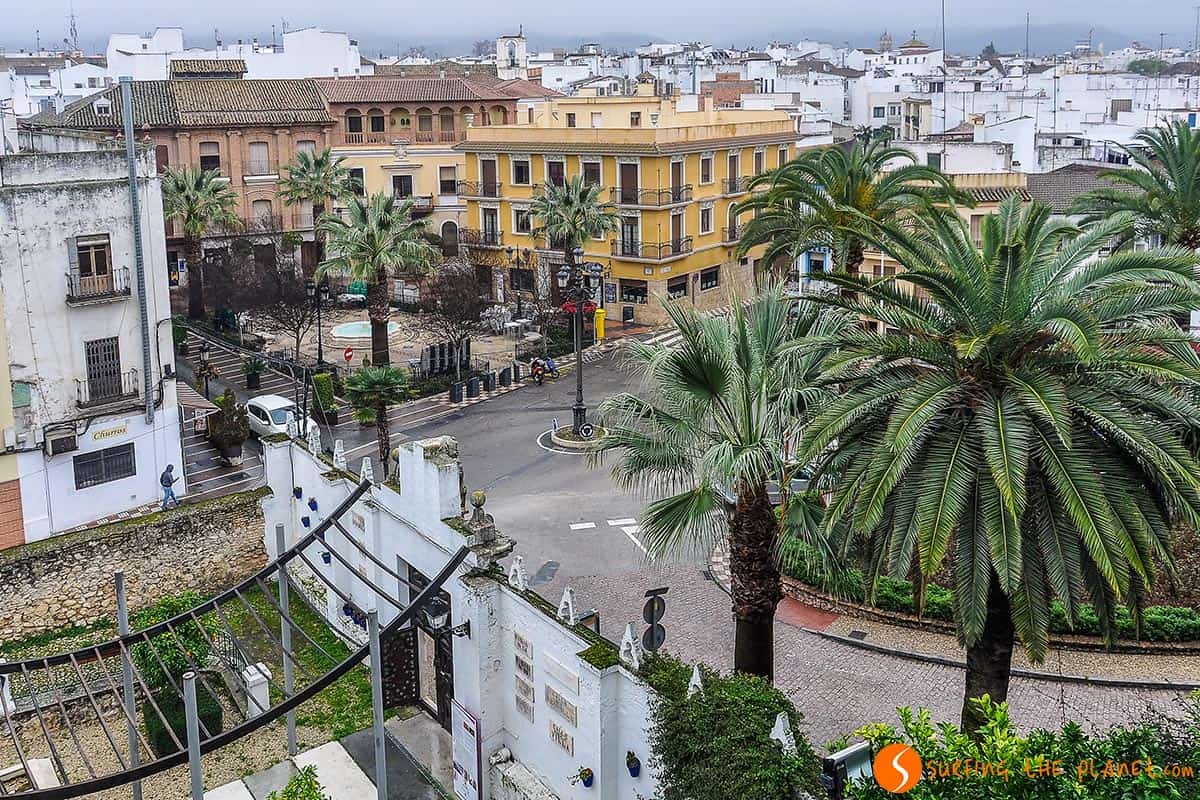 The Arabian city of La Almedina is probably one of the most important things to visit in Baena, together with the Archeology Museum and the Archeological Park of Torrespadrones, where we can get to know a lot about the life in theses lands in the times of the Romans. 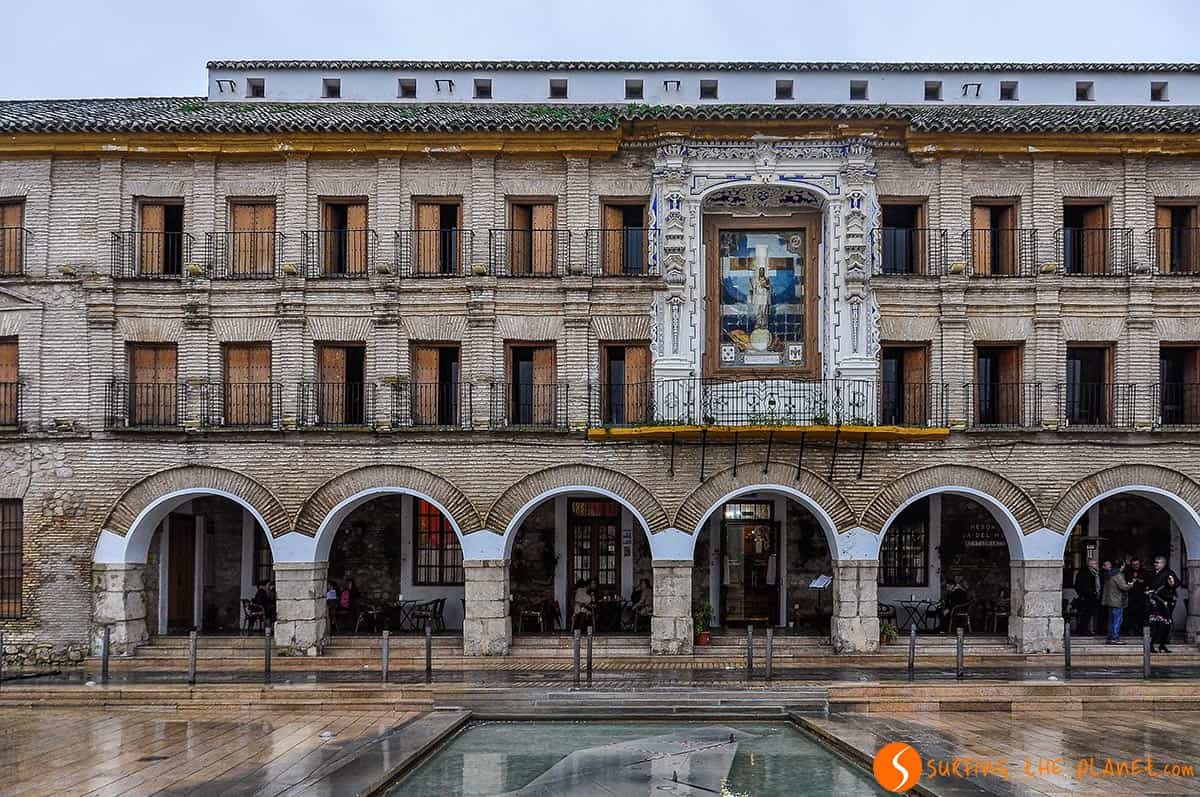 Its Arabic and Christian (also Jewish) past can be noticed everywhere in the city, which makes Baena a place with rich historical and artistic patrimony. One of the highlights is the Parish Church of San Mateo, built in baroque style with one of the most beautiful tabernacles we have ever seen. Another gem of baroque architecture in Lucena is the house of the Count of Santa Ana, which nowadays works as the Visitor’s Center of Lucena. 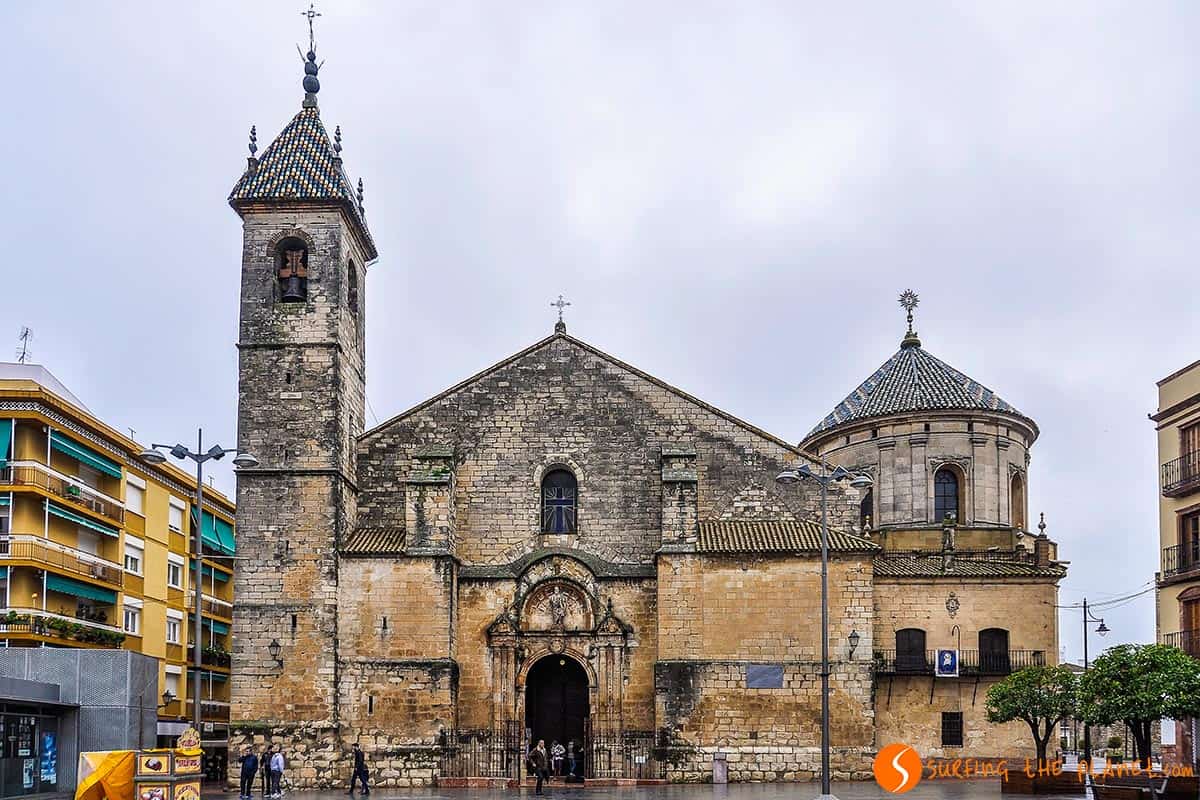 From Puente Gentil it’s worth mentioning as the most significant monument, the stone bridge over the River Genil, which gives the name to this town.

You can’t miss out on visiting the wine cellar of Bodegas Delgado, where you can learn a lot about the production of Pedro Ximénez and Amontillado wines, and also purchase a bottle from the best Pedro Ximénez sweet wine. 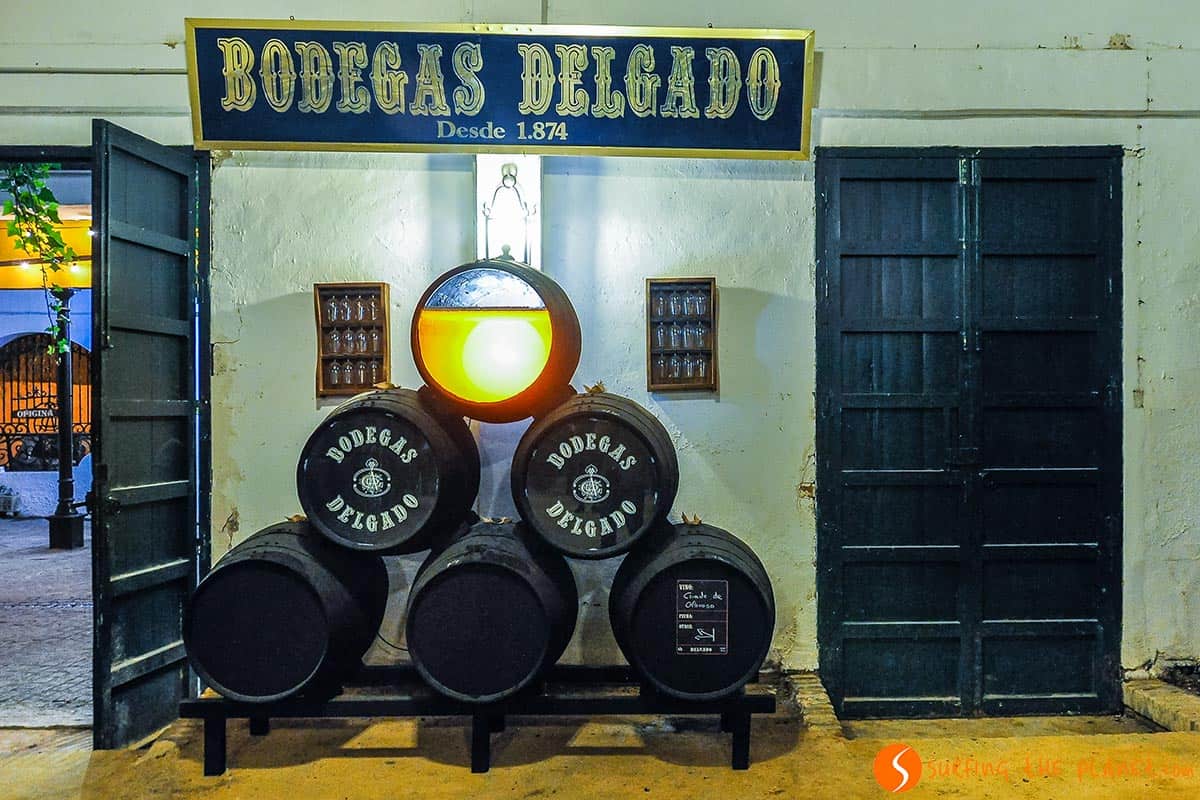 When you arrive in Osuna, you might not expect that the most beautiful in this town will be the streets. San Pedro street is one of the most beautiful streets of Spain with its old countryhouses that have highly decorated façades. On the top of a hill we can found the Colegiata Church, a beautiful example of renaissance architecture in Spain. From here you can enjoy a fascinating view of Osuna. 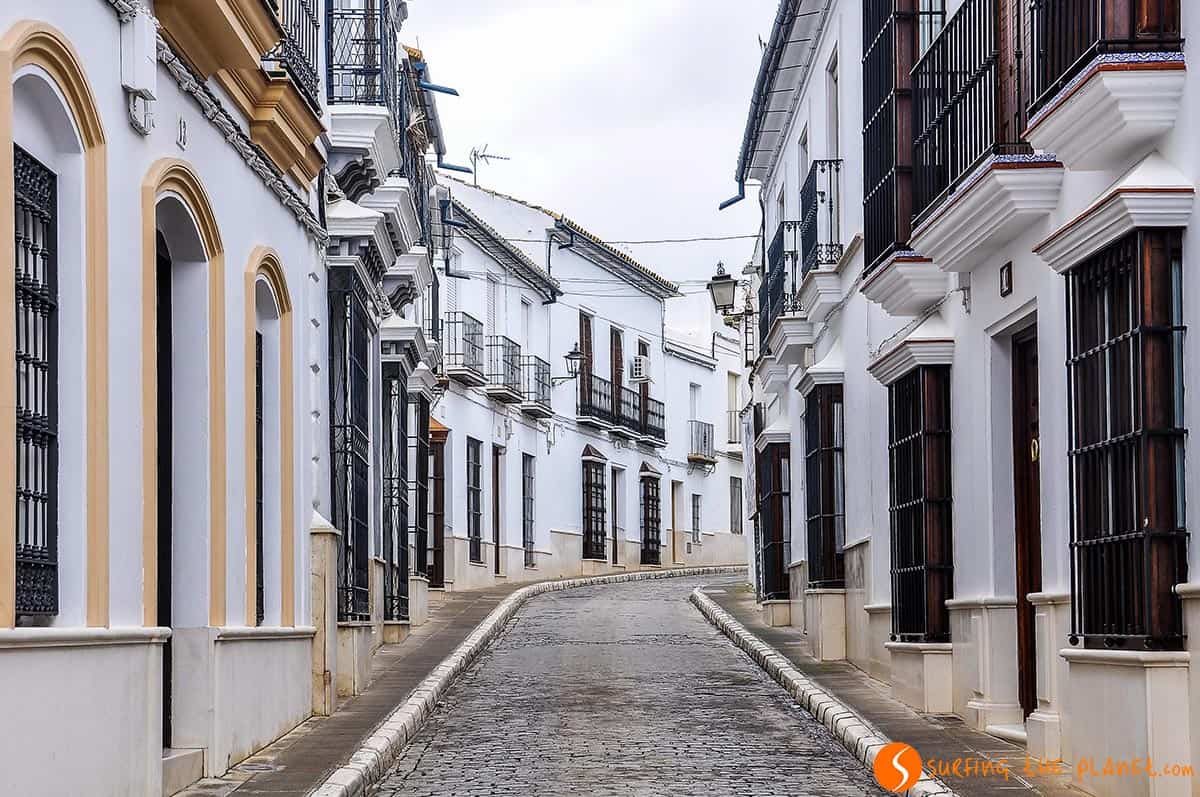 Carmona is a really charming town, the historical center of which can be accessed through the Alcázar de la Puerta de Sevilla Fortress from one side or through the Alcázar de la Puerta de Córdoba Fortress from the other side. It’s worth getting lost amongst the narrow alleys and enjoying the special atmosphere. In order to get to know a little bit more the culture of Andalusia, we suggest you assist a flamenco or saeta (religious folk songs) performance in the Asociación Cultural Flamenca “Amigos de la Guitarra”.

Useful information about the route of Caminos de Pasión:

How to do this route:  By far the best way to get the most out of this route is renting a car in Córdoba and leaving it in Seville (or vice versa) after the trip.

How many days we need: we recommend to take at least 4 days for this trip, but if you have more time, a week should be enough to visit all the major sights in the route.

When to do this route in Andalusia: in principle any part of the year is fine, although we remind you that in summer you can find very hot weather in some places.

– ZZZ… BOOK YOUR HOTEL IN ANDALUSIA – find the best hotel for you.

– BRUM BRUM… RENT A CHEAP CAR FOR YOUR TRIP TO ANDALUSIA – find the best car for you.

Artículo anterior Visit Andorra. Hiking the Pessons Lakes
Artículo siguiente What to do and see in Bangkok