With this post: what to see in Rome we hope you will fell in love with this spectacular city as much as we do! Rome, the Eternal city – it inspires everyone who sets foot in this metropolis. The impressive squares, the ruins from our ancient history and many other charming places make you feel really special when you spend even just a day in the Italian capital. In many parts, the city is very chaotic, it can be really hot during the summer and there are tourists everywhere most of the time, but this does not affect the love most of us feel for Rome, the capital of love. There are countless things to visit and infinite things to do in this city. It’s one of the cities where you discover amazing things even after several visits. We collected in this post our selection of 21 magical places that you can’t miss out on when you visit Rome.

What to see in Rome: The squares

Probably the most spectacular square in Rome. It still conserves the elliptical form of a Roman circus and it’s decorated with 3 beautiful fountains, amongst the famous Quattro Fiumi by Bernini. 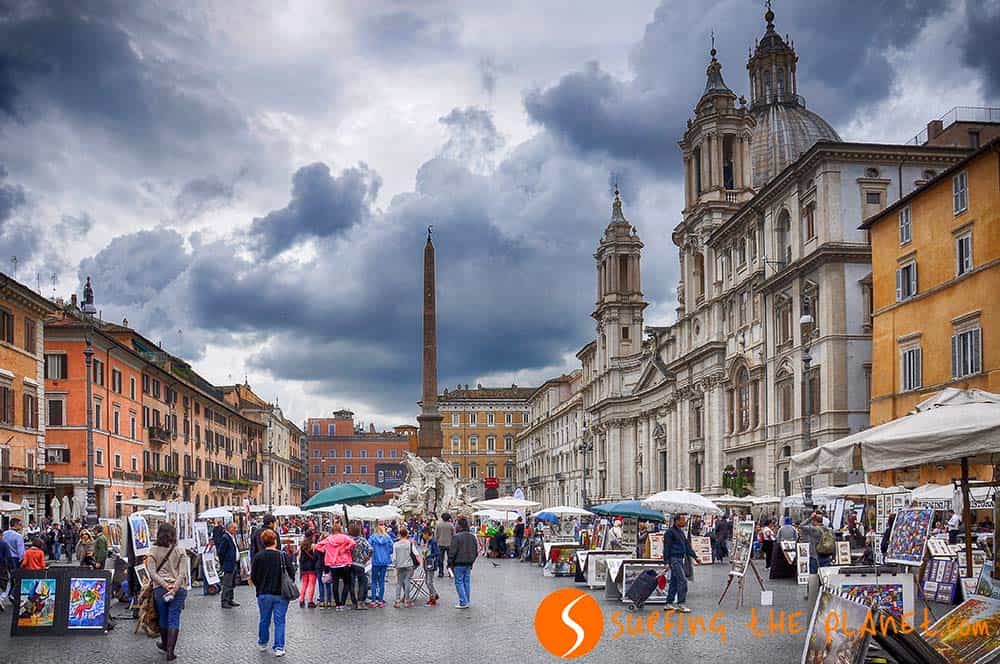 The Trevi Fountain is probably the most popular attraction in Rome. A wonderful fountain that became very famous after Fellini’s Dolce Vita movie. It’s always crowded with people throwing their coins to the fountain, which guarantees (according to superstitions) their return to the city. 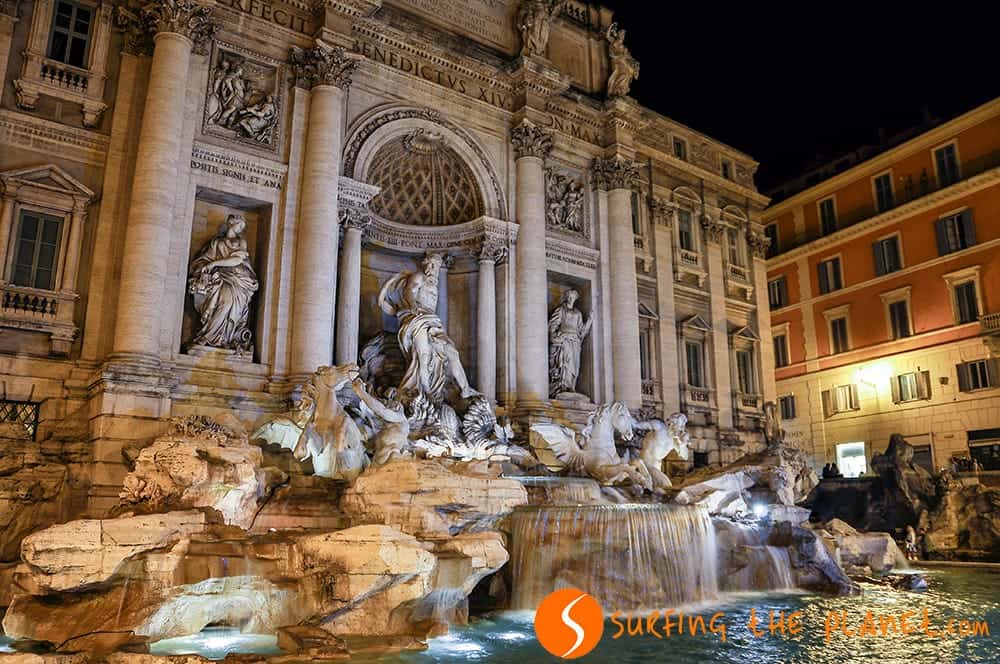 One of the largest squares in the city with an Egyptian obelisk in the middle, three churches and several fountains around. It’s worth climbing the squares of the Pincio Hill for a great view of the square. 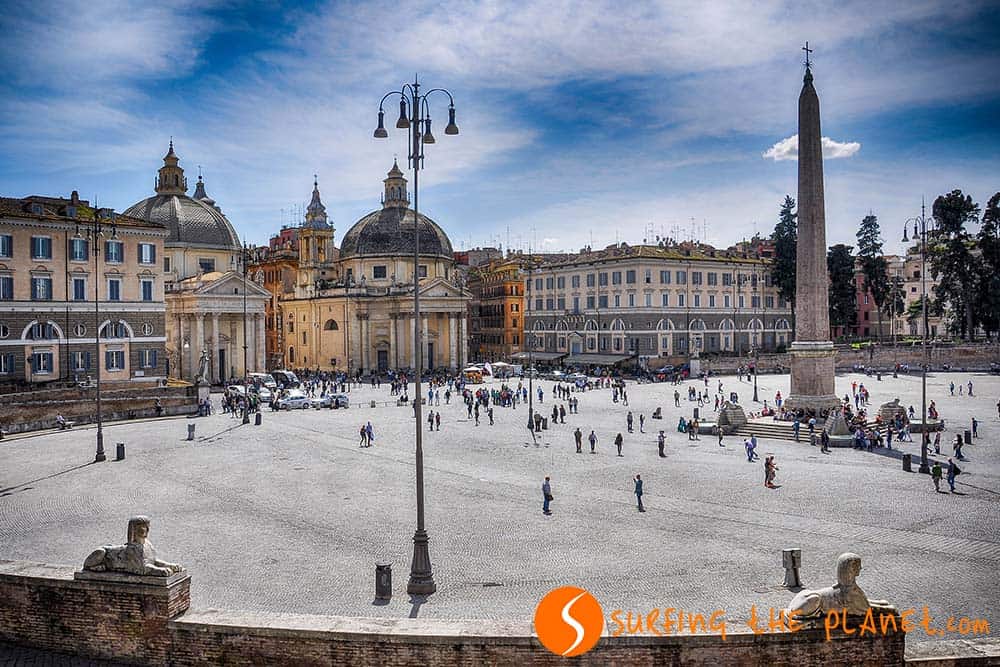 The busiest square in Rome with cars and buses horning, when crossing it from many directions. The view of the square is dominated by the enormous Vittorio Emmanuel II monument (the typewriter, as it is called by my many people). 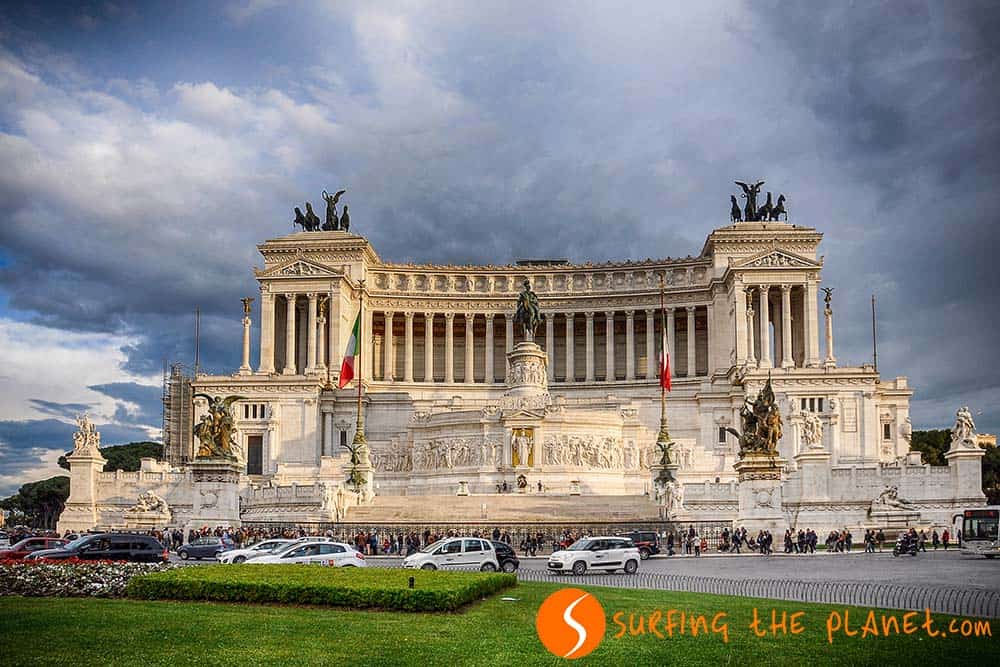 Once a flower field (reflected in its name), later the square where the executions took place (Giordano Bruno’s statue in the middle reminds us about that) and now a lively market square where you can find all types of fresh products. 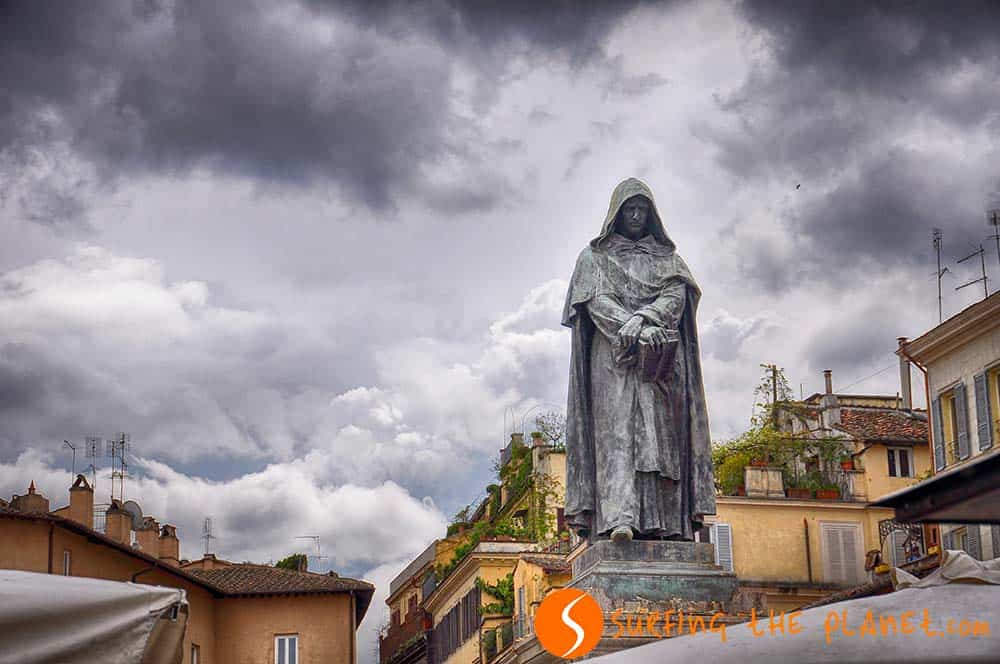 A marvelous square that is situated on the Capitoline Hill and was designed by Michelangelo. 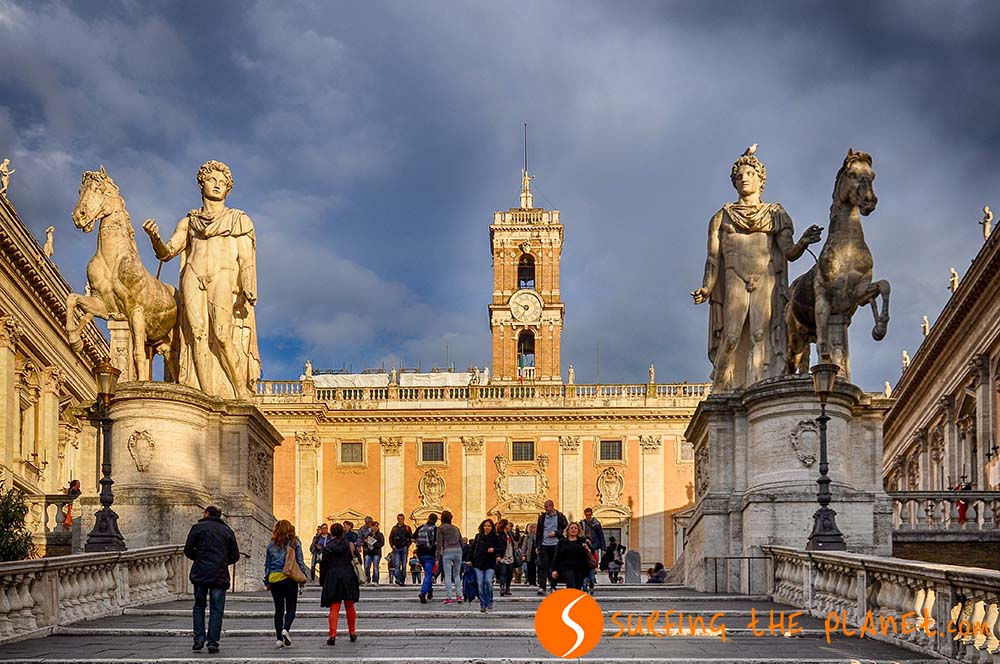 A fantastic ellipse shaped square designed by Bernini. There’s an obelisk in the middle of the square and on both sides there’s an impressive colonnade decorating this majestic square. Every Sunday the square gets filled with people who want to listen to the pope’s short speech.

What to see in Rome: The Ancient Rome

The best preserved monument from the ancient Rome situated in a beautiful square. It’s a perfect hemisphere build with beautiful geometrical harmony. The tombs of Raffaelo and Vittorio Emanuele II are found inside.

Inarguably the most famous ancient monument and the hugest amphitheater in the world. Once a place where gladiators killed each other, now it’s an open-air museum bringing us back a couple of thousand years in time. 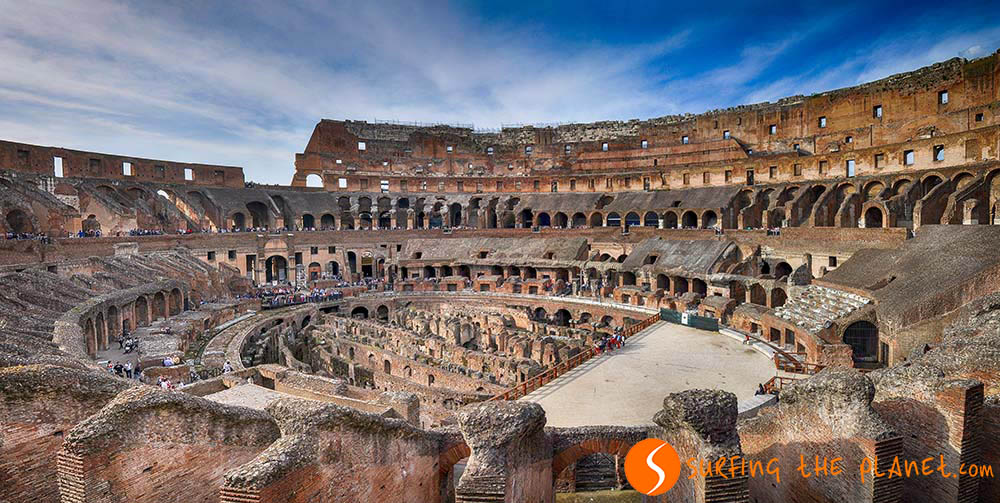 The ruins of the heart of the ancient city. This was once a place where temples and different places stood. Although you need to have a good imagination to envision this place in the era of its glory, walking between the ruins is a fantastic trip into our ancient history. 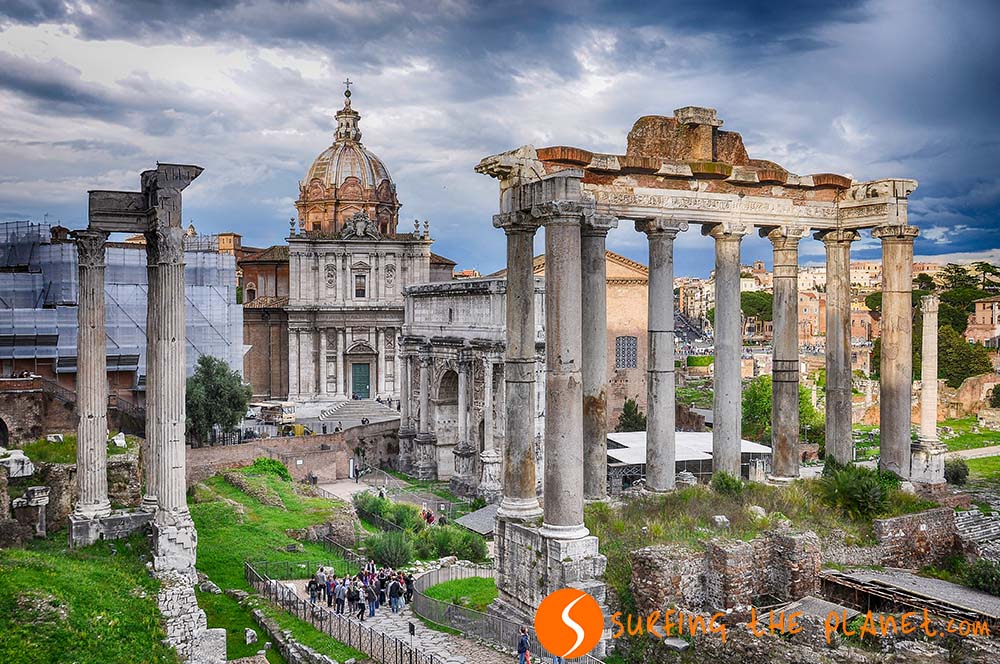 One of the oldest parts of the ancient city. This is where (due to mythology) Romulus and Remus were found by the wolf that saved their life and fed them. Many famous Roman personalities lived in this hill, amongst them Augustus, one of the most important emperors in Roman history. 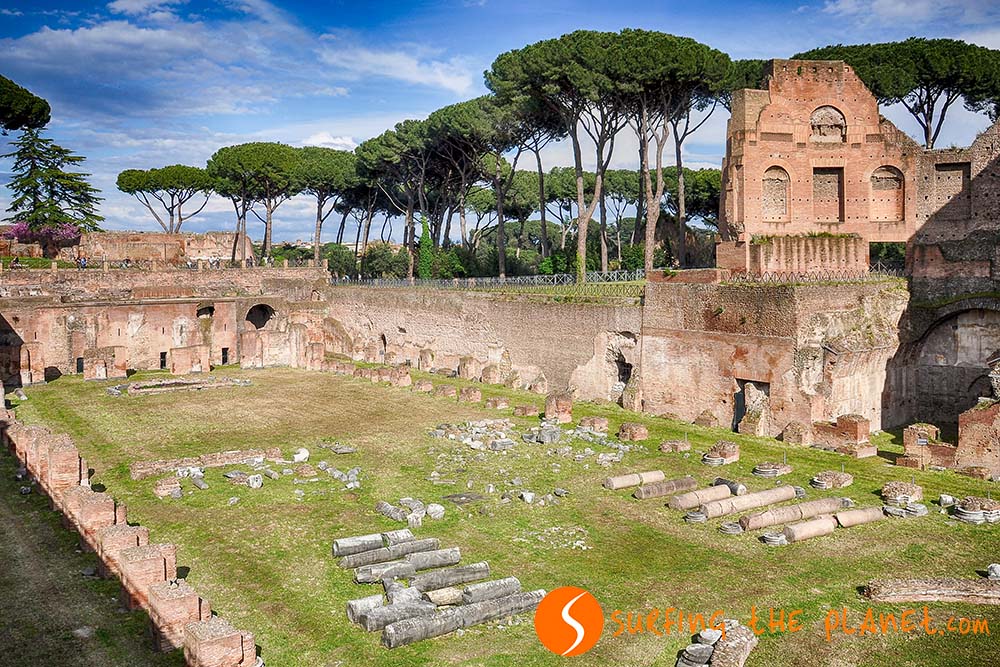 Once built as Hadrian’s mausoleum, later transformed into a castle that served to protect the popes during centuries. 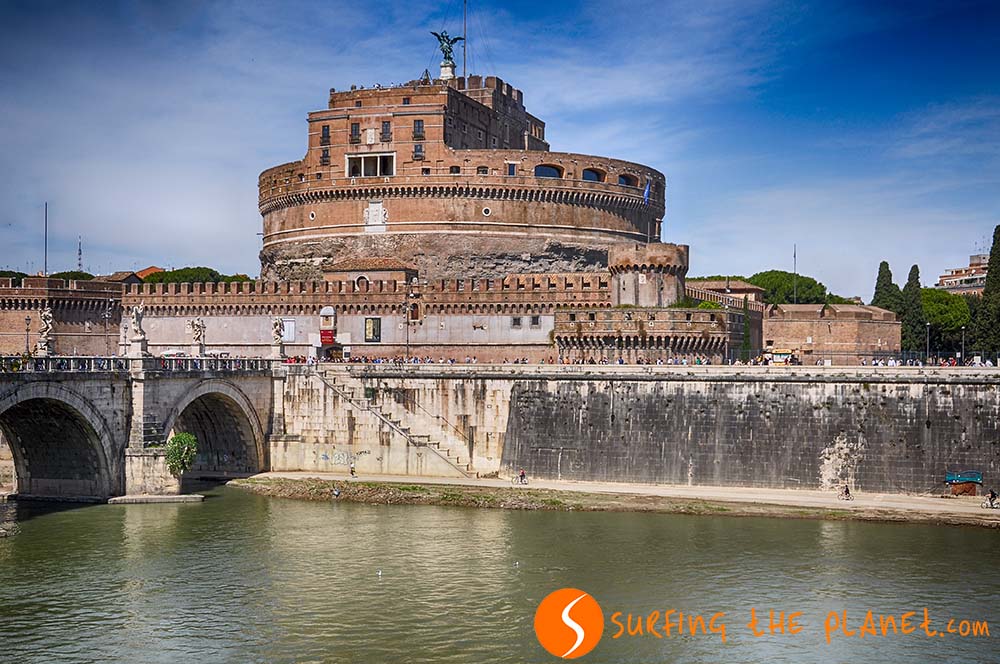 This is where once the great chariot racing stadium stood. Unfortunately not so much left from the original construction, but the place is being converted to a nice green area where concerts and other events are held. 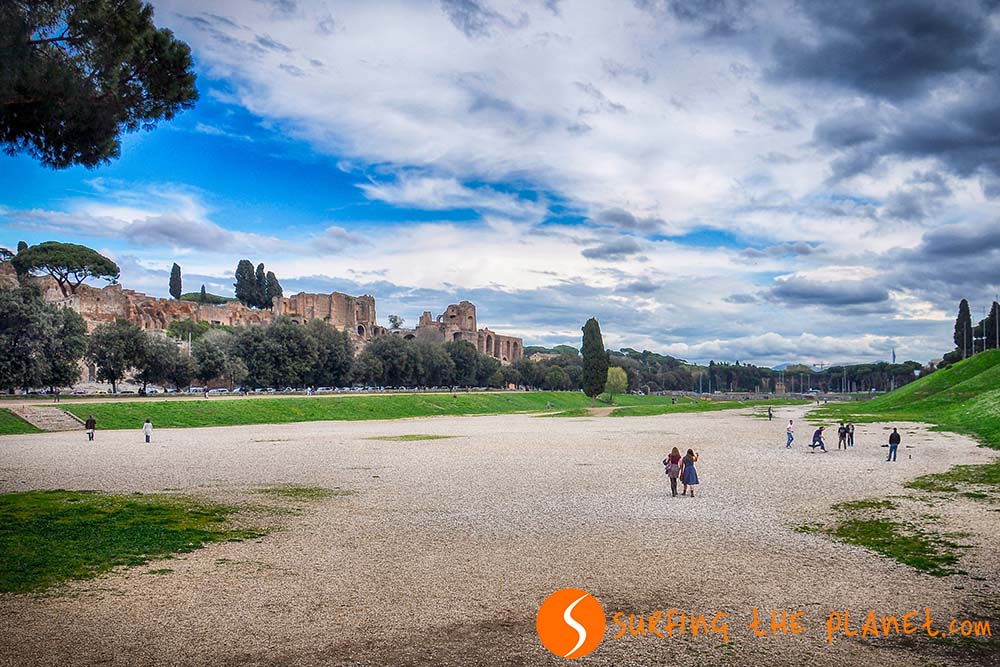 What to see in Rome: Religious Rome

The largest catholic church in the world and probably the most impressive one with its colossal dimensions. Amongst the beautiful statues and ornaments on the inside, Michelangelo’s Pieta is the most beautiful piece.

15. The Vatican Museums and the Sistine Chapel

This small state, residence of the head of the Catholic Church is a walled enclave in the city of Rome. The Vatican Museums hosts one of the most impressive art collections of the world, and the Sistine Chapel, exquisitely decorated with Michelangelo’s frescoes is one of the most beautiful artworks in our planet.

16. The Santa Maria in Cosmedin Church and the Mouth of Truth (La Bocca della Verità)

Inside the portico of this church from the 12th century we can find one of Rome’s symbols, the Mouth of Truth. According to the legend, this mouth works as a lie detector:  those who stick their hand inside will lose it if they lied before. Would you dare? 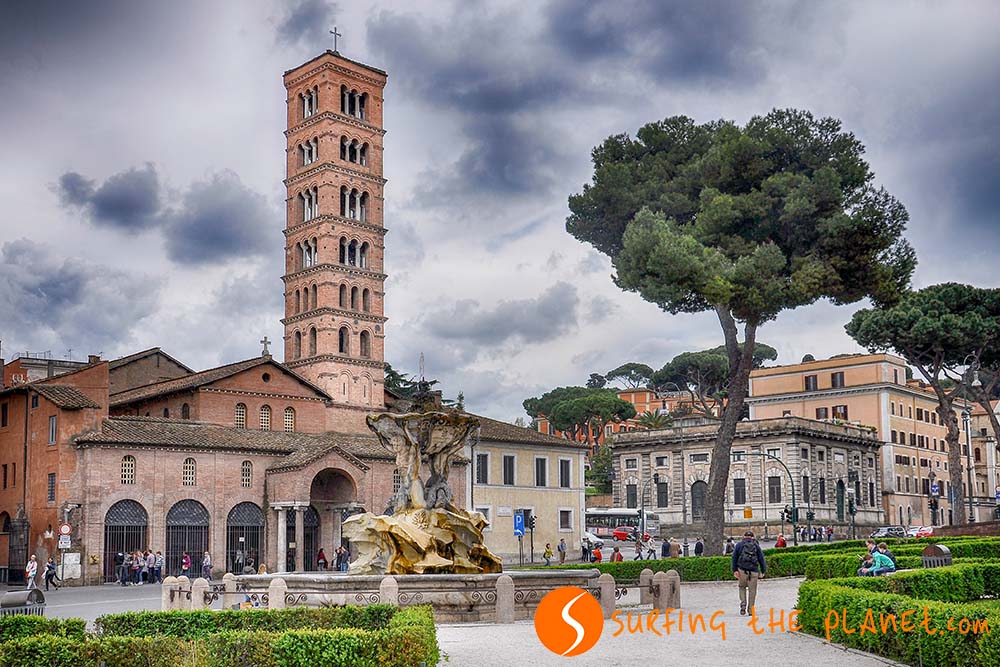 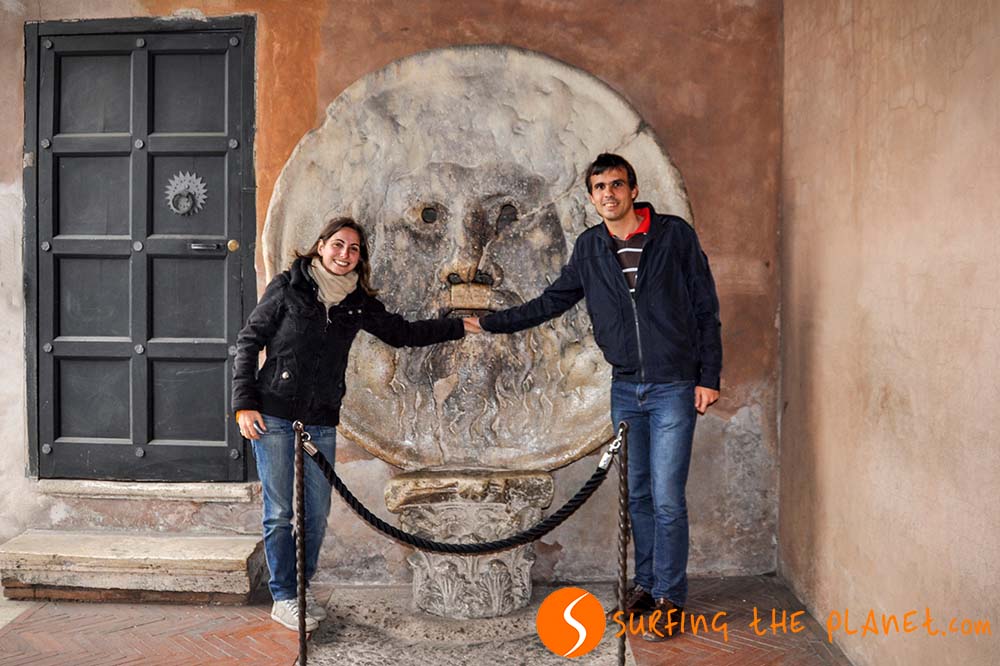 17. The Papal Basilica of Saint Paul

St Paul’s –as it is named amongst local people- is one of the four major basilicas in Roma.

What to see in Rome: Other places to visit 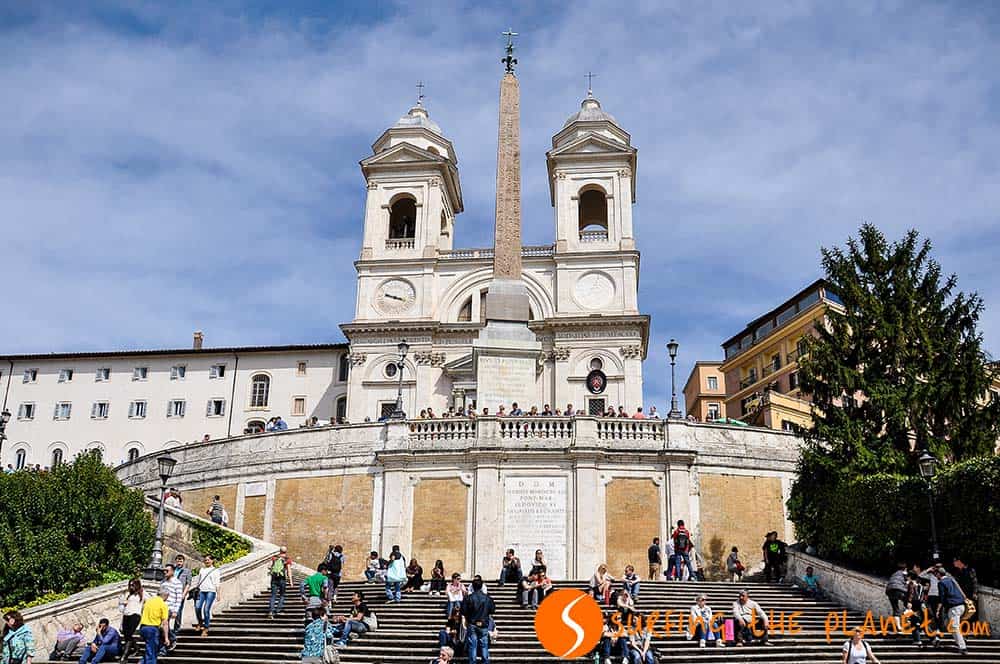 This is one of the calmest points of the city, even during the peak of the tourist season you can have a stroll here in tranquility. The history of the island is full of legends and mysteries 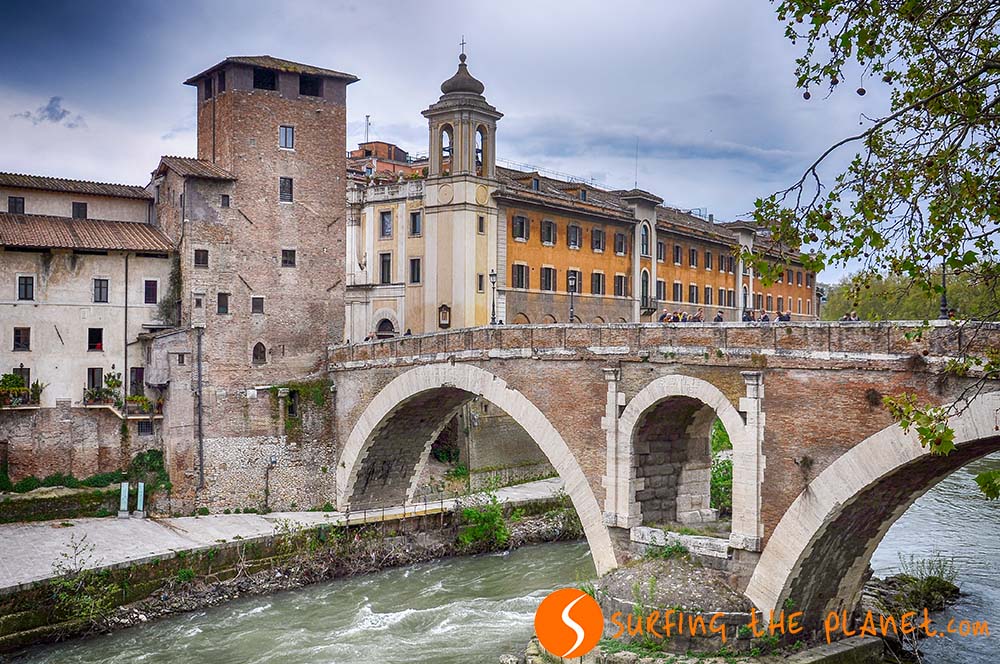 Once the most important road connecting the city of Rome with the rest of the empire. The ancient pavement is still conserved in many places, and it’s a fantastic feeling walking on a road where our ancestors walked thousands of years ago. 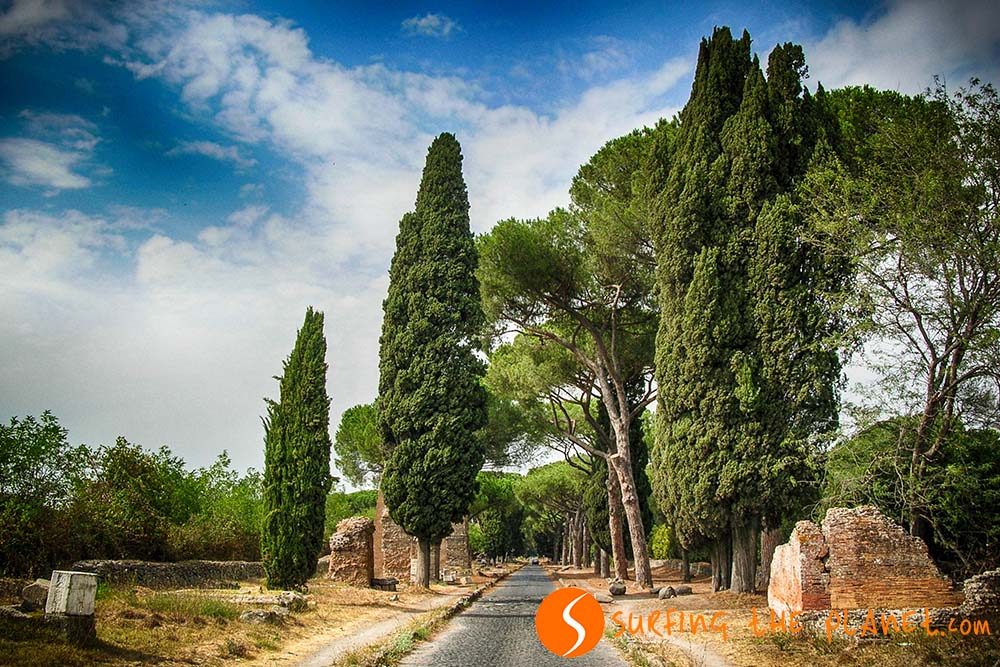 Aqueducts are also symbols of our Roman heritage. A Roman invention that gave solution to the massive water needs of a huge empire. The most impressive Roman aqueducts are not found in the city of Rome, but Aqua Appia (close to the Appian Way) is a nice example of these robust constructions. 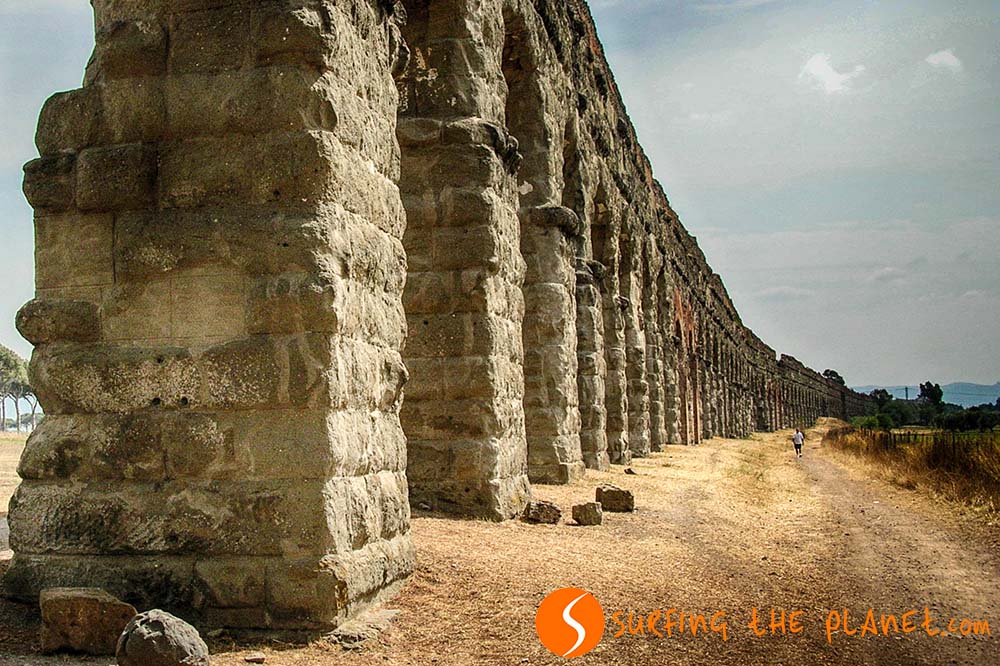 After visiting so many cultural attractions, the best place to have dinner is the lively neighborhood of Trastevere. You can find all sorts of restaurants here. The taste of a good Roman pizza and the atmosphere of this place let you recover after a long day of visiting the city

Do you have a favorite place in Rome that is not on our list? We would love to hear about that in the comment section.

– ZZZ… BOOK YOUR HOTEL IN ROME – find the best hotel for you.

– WOW… EXCURSIONS, CHEAP GUIDED TOURS <– BRUM BRUM… RENT A CHEAP CAR FOR YOUR TRIP TO ROME – find the best car for you.