Home » Blog » Travel to Holland » Lloyd Hotel, the first 1 to 5 star hotel in the world

When we decided to visit Amsterdam, we were sure that we would found an interesting and somewhat peculiar hotel to stay at. Searching for the most suitable accommodation in the end we found the Lloyd Hotel, the first hotel in the world that has rooms of 1 to 5 stars. A hotel for all kinds of budgets that offers inexpensive rooms for budget travelers and glamorous rooms for luxury travelers.

The Lloyd Hotel is situated near the harbor of Amsterdam. The hotel is very well known, since it’s not just a simple hotel, but a building with a lot of history. The building was opened in 1920 to host immigrants, later was used to give shelter to refugees, then as a juvenile correctional facility and finally ended up as an artist studio. Finally in 2011 the hotel opened its doors to the public. The renovation took 8 years in which more than 40 internationally recognized designers participated. More than just a hotel, it can be considered as an architectural masterpiece. There are 117 rooms in the Lloyd Hotel, each of them has a unique style. When you book a room you only select the category of the room (from 1 to 5 stars), but you won’t know which concrete room will stay at, the latter will be a surprise. 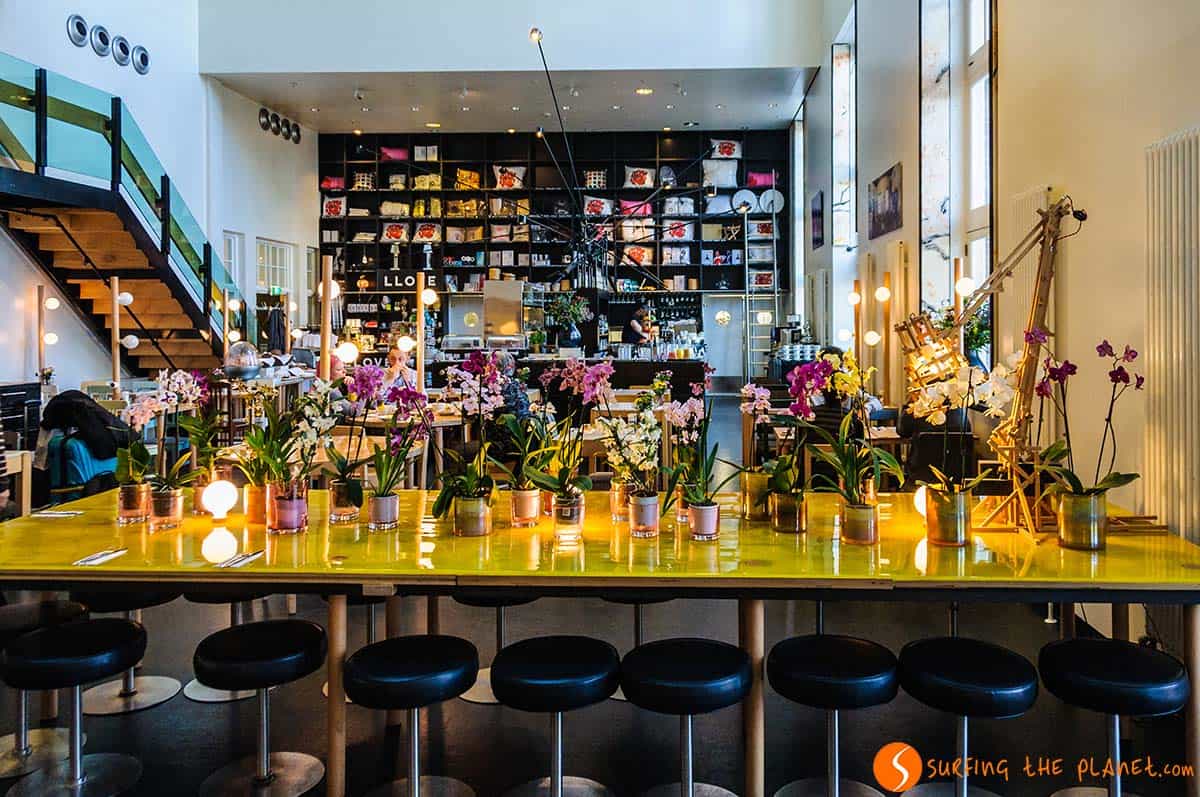 As we said before, the hotel is found in the antique harbor area of Amsterdam. The location of the hotel was very comfortable for us, since it only took 10 minutes to get to Amsterdam Central Station in tram Nr. 26, whereas tram Nr. 10 connects the hotel with the city center and Museum square.

We arrived in Amsterdam late in the evening, and took a train from the Airport to Central Station, then we took a tram to the hotel. As soon as we entered the hotel, we immediately saw that it was a hotel with a quite unusual style. In order to get to know the hotel better and to have a more complete experience, we decided to stay 1 night in a 1-star room and another night in a 5-star room.

They gave us our key at the reception, and we were also told where our bathroom was found (the 1-star room comes with shared bathroom). We took the elevator to our floor, and our first sensation we had on the hotel corridor was that “we are in a hospital”. When we opened the door, we had the confirmation that designers really wanted to make us feel in a decadent and antique hospital. 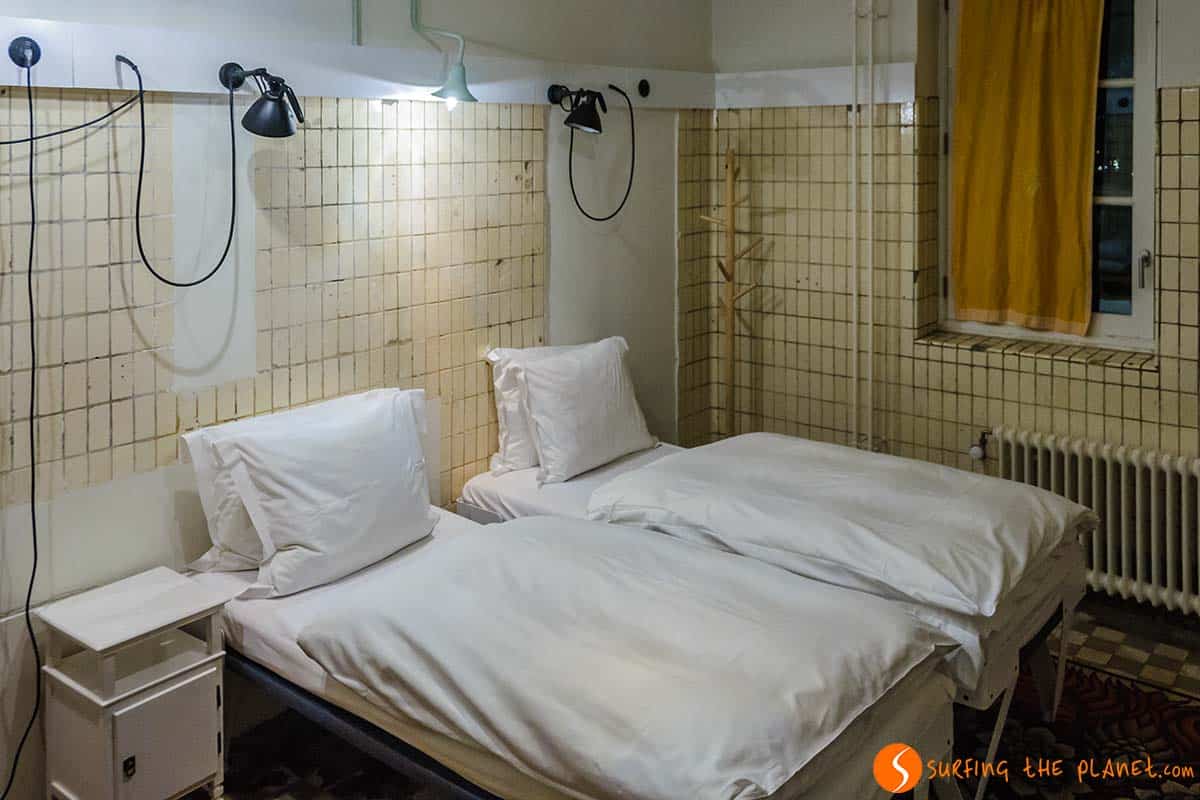 Sincerely the first impression was a bit strange, but in the end we loved spending the night in this room, a bit different from a regular hotel room. The hotel room was very clean with bathrobe, 2 towels per person, shampoo and shower gel. The bed mattress was very comfortable.

The second night we spent in a 5-star room. We were really curious which of the beautiful 5-star rooms will be ours, but we saw on the webpage that all 5-star rooms are precious, so we knew that we wouldn’t be disappointed. It was almost better not to pick it ourselves, as we wouldn’t have known which one to pick.

We went up to the sixth floor and we were surprised again, the corridor of the room was dark and grey. Even the door of the room was grey. We were thinking whether it was some kind of a mistake and we were given the key to the wrong room. Shyly and slowly  we opened the door, and felt like Alice entering wonderland, who is going to discover an enchanted world behind the door. 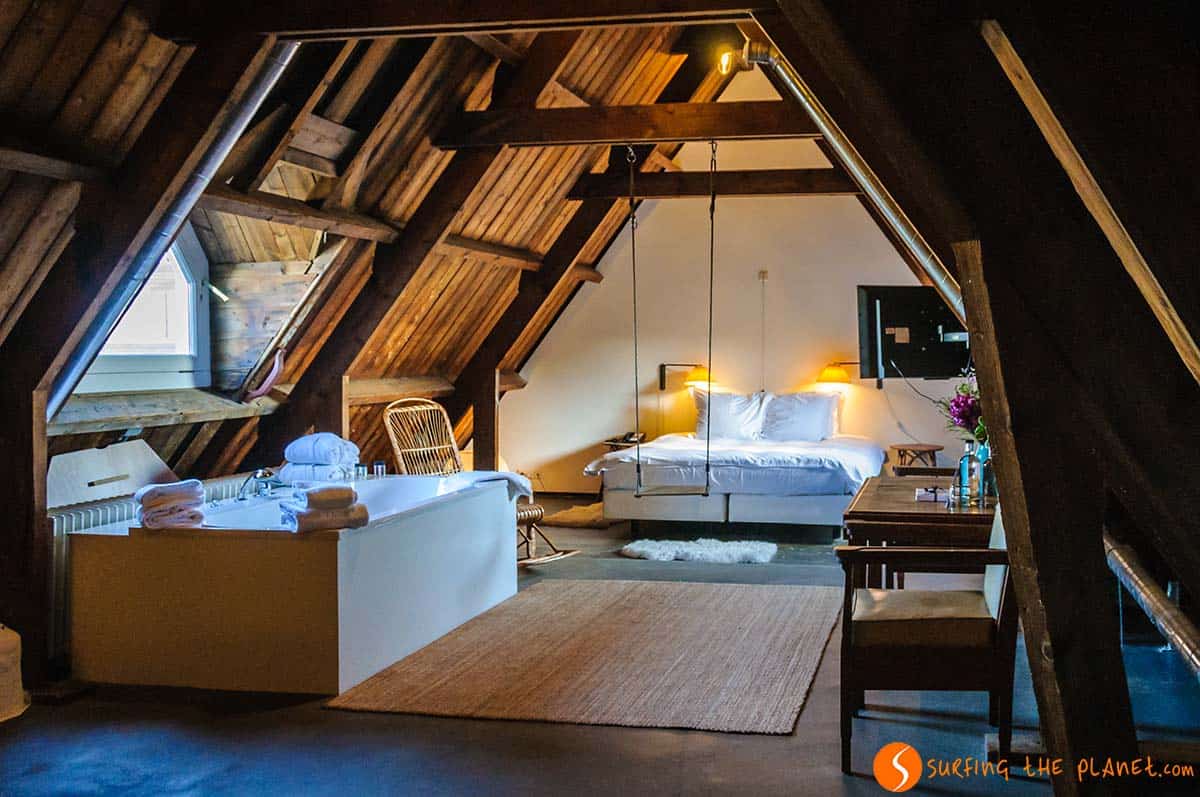 Just like Alicia in the tale, we also discovered a very different world behind the door. The room was even prettier than what we expected to find, there was a huge bathtub in the room and a swing in the middle as a unique detail. It was a room that was romantic and childish at the same time. No one who reads us regularly will be surprised that Rachele immediately sat on the swing, while Gábor was opening the luggage. 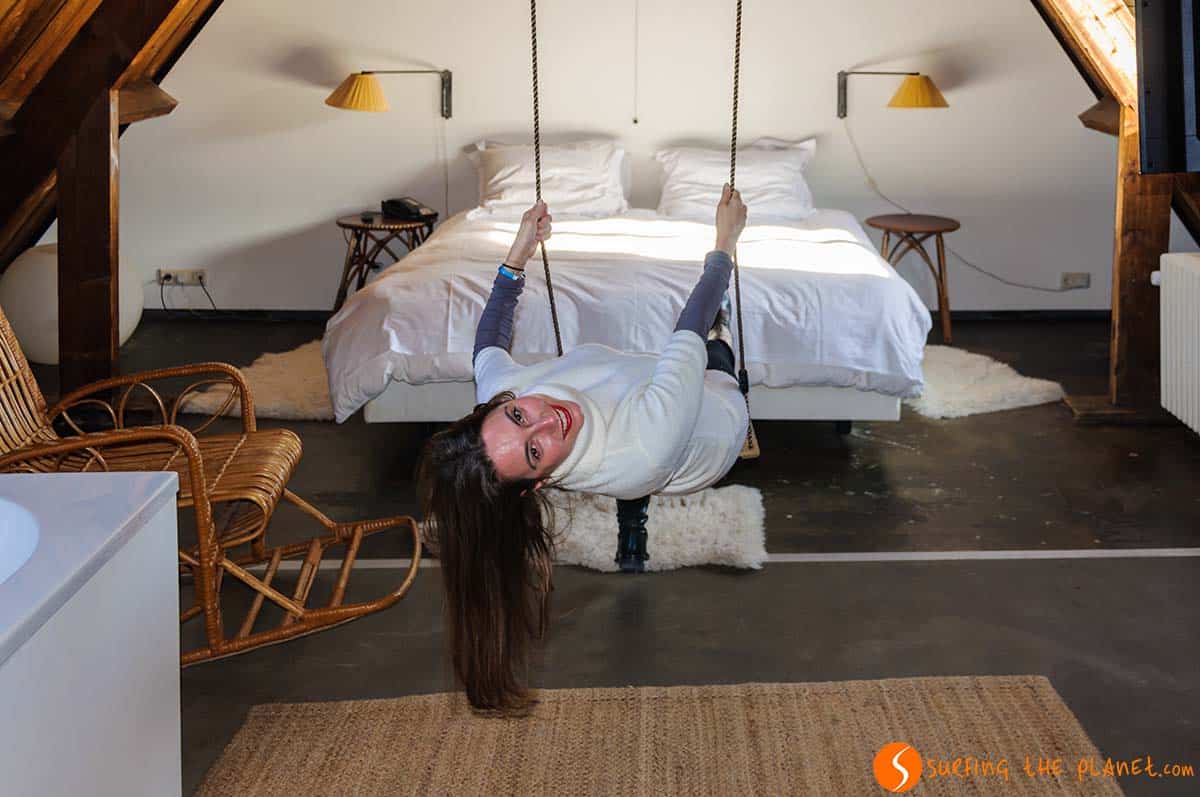 The modern restaurant in the Lloyd Hotel offers a variety of European and local dishes, and we have to admit that prices are really honest. We only spent a couple of days in Amsterdam, and we didn’t have time to have dinner there, but we tried the breakfast there, for sure. 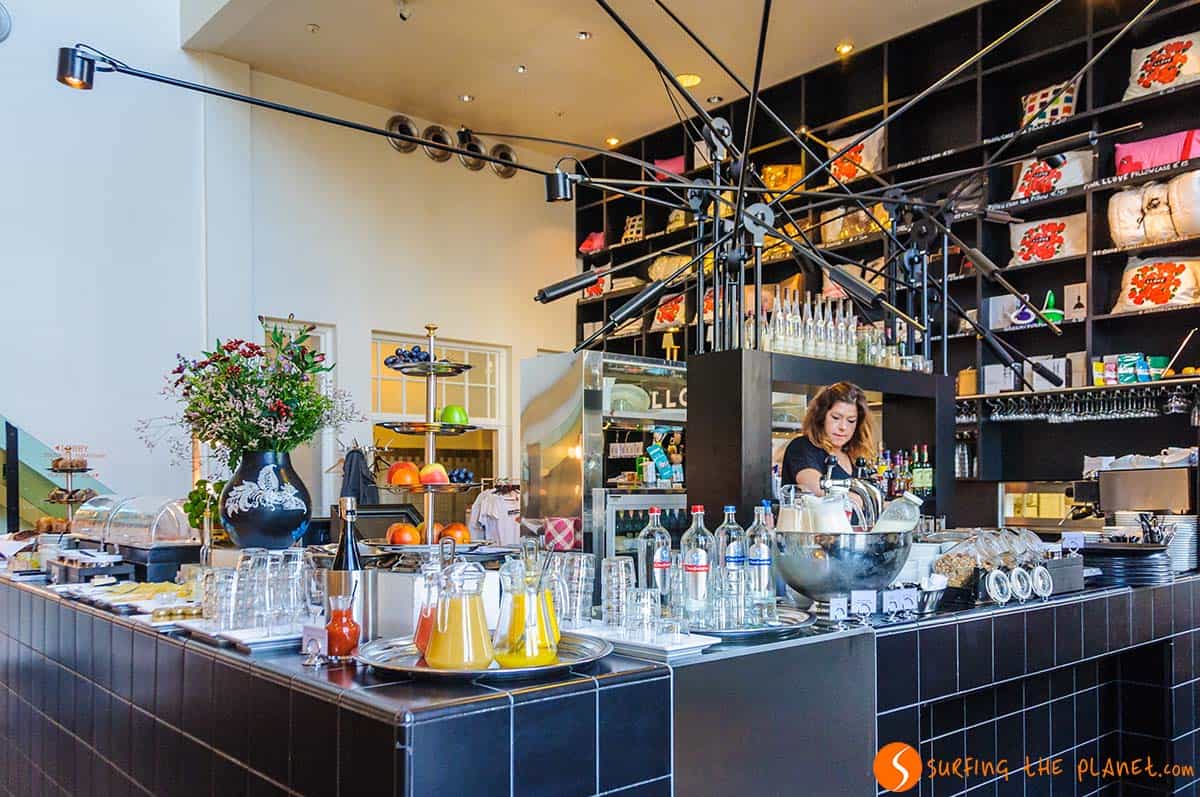 There’s a large buffet breakfast with both local and international products. From our table salmon and Gouda, the typical Dutch cheese was never missing. One of the specialities of the hotel is the homemade apple pie, which we recommend you to try. The restaurant has a nice and modern design with lots of beautiful details and colorful flowers. 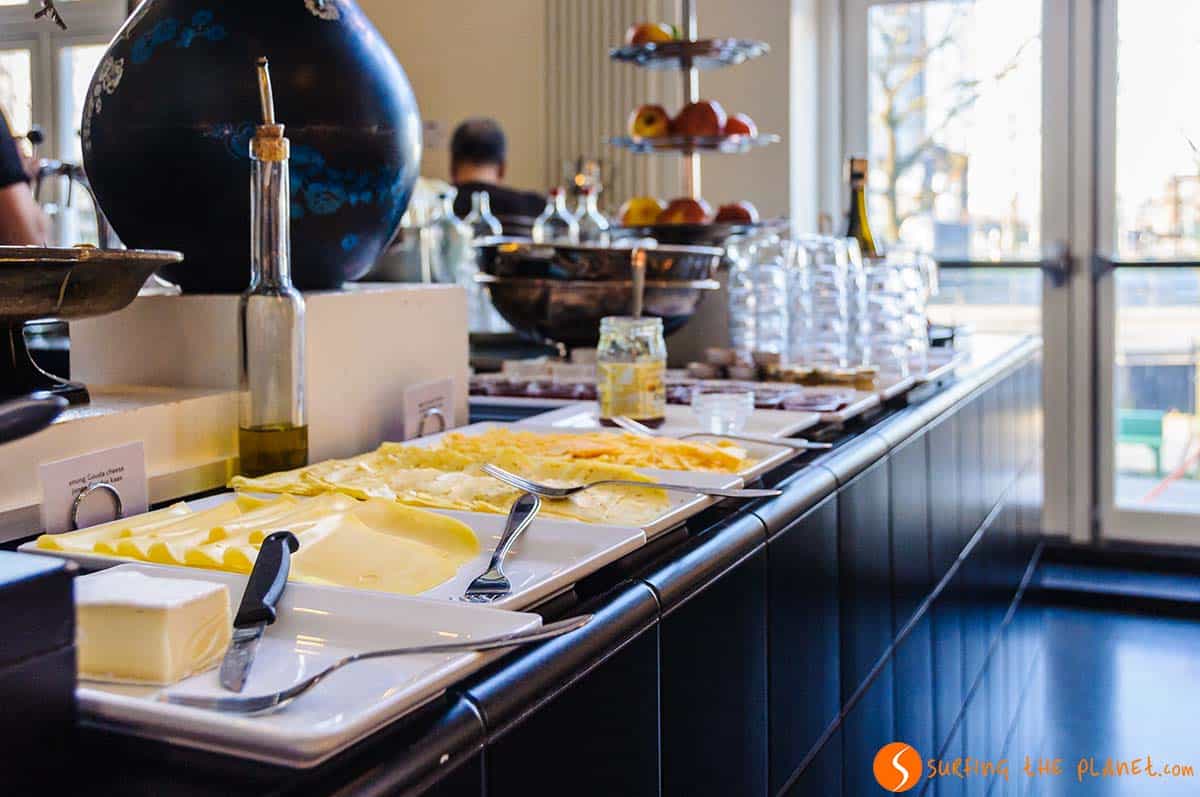 The staff at the hotel is polite and they always pay attention to your needs, which really made us feel comfortable.

Our stay at the Lloyd Hotel was a surprise and a great discovery. If you visit Amsterdam, you will find this hotel perfect independently of your budget.

– ZZZ… BOOK YOUR HOTEL IN AMSTERDAM – find the best hotel for you.

– BRUM BRUM… RENT A CHEAP CAR FOR YOUR TRIP TO AMSTERDAM – find the best car for you.