In Marrakesh there’s a huge offer of accommodations: from cheap hostels to huge hotel complexes, whereas the most typical accommodations are the riads, traditional Moroccan houses with a patio or garden in the interior. As usual, we were looking for a place where to stay in Marrakesh that had something special, something that made it unique. In the end, we ended up choosing Riad Mur Akush, a small riad in the Marrakesh Medina. Since the first mails we exchanged with Maria, the owner of the riad, we have been really sure that this was the place we were looking for, the perfect place to stay during our trip to Marrakesh.

We arrived at the Riad Mur Akush early in the morning after a seemingly endless wait in the passport control at the airport. The street near the riad is a place full of activity with people passing by in their motorbike or by car, and there are also numerous shops and restaurants there. Nevertheless, when you cross the door and enter in the welcoming courtyard of Riad Mur Akush, everything gets transformed. The world stops, the noises from the outside seize to exist any more, and what only remain are the tranquility, the chirp of the birds and the shadow of the trees. It must be for a certain reason that “riad” means garden in Arabic. 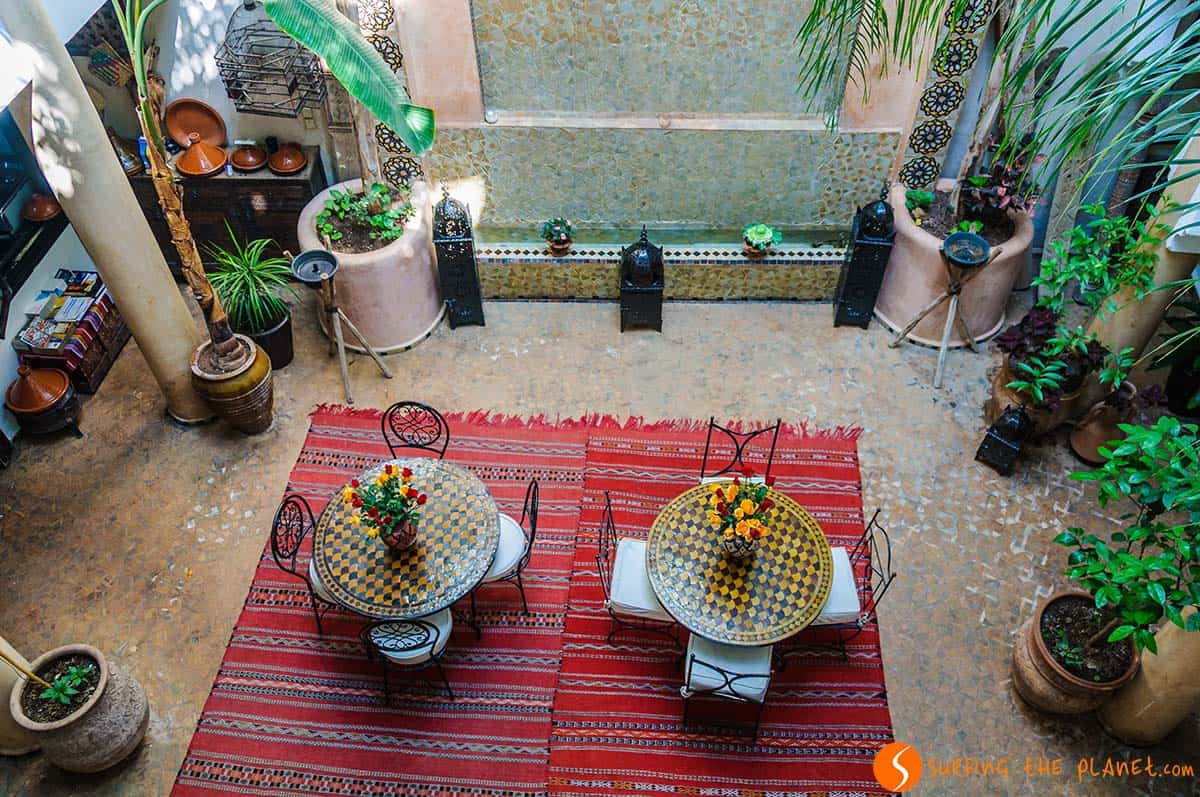 On our arrival Anna, a Russian girl and Mohamed were waiting for us in the riad. As a local tradition, we were offered our first Moroccan mint tea with a lot of sugar together with some tasty pastry. We really appreciated that not only because of the nice gesture, but we were sincerely hungry after waking up very early and not having too much breakfast. In the riad we really felt at home from the beginning, and immediately started to feel relaxed and to forget about the quick-paced life we have at home.

The Riad Mur Akush is situated inside the Medina, which makes it a perfect place where to stay, while you visit Marrakesh. It’s really easy to visit the city from there, since most major attractions (the Jemaa el Fna square included) are not farther than a 10-15 minute walk from the riad, and at the same time it’s a quite calm part of the Medina. Riads differ from usual hotels, since they are usually much calmer with their courtyard and they try to reflect the local Arabian design.

The inner patio of the Riad Mur Akush, together with the terrace, was our favorite place to have some rest, read a little bit and in general to relax in the shadow of the trees listening to the singing birds.

The patio is big enough to be nicely illuminated, but at the same time it doesn’t get direct sunlight, which keeps cool temperature there during the whole day. There are comfortable places to sit down in the patio, and two tables always nicely ornamented with fresh flowers. It’s the main place in the riad, since all rooms give to the same patio, and everyday life in the riad occurs always around this patio. The huge Arabian style fountain, which is found in one of the walls is really magical, especially at night when it really becomes alive. There’s also a small living room opening from the patio with comfortable sofa and armchairs, another perfect place to relax with a book both during the day and at night. 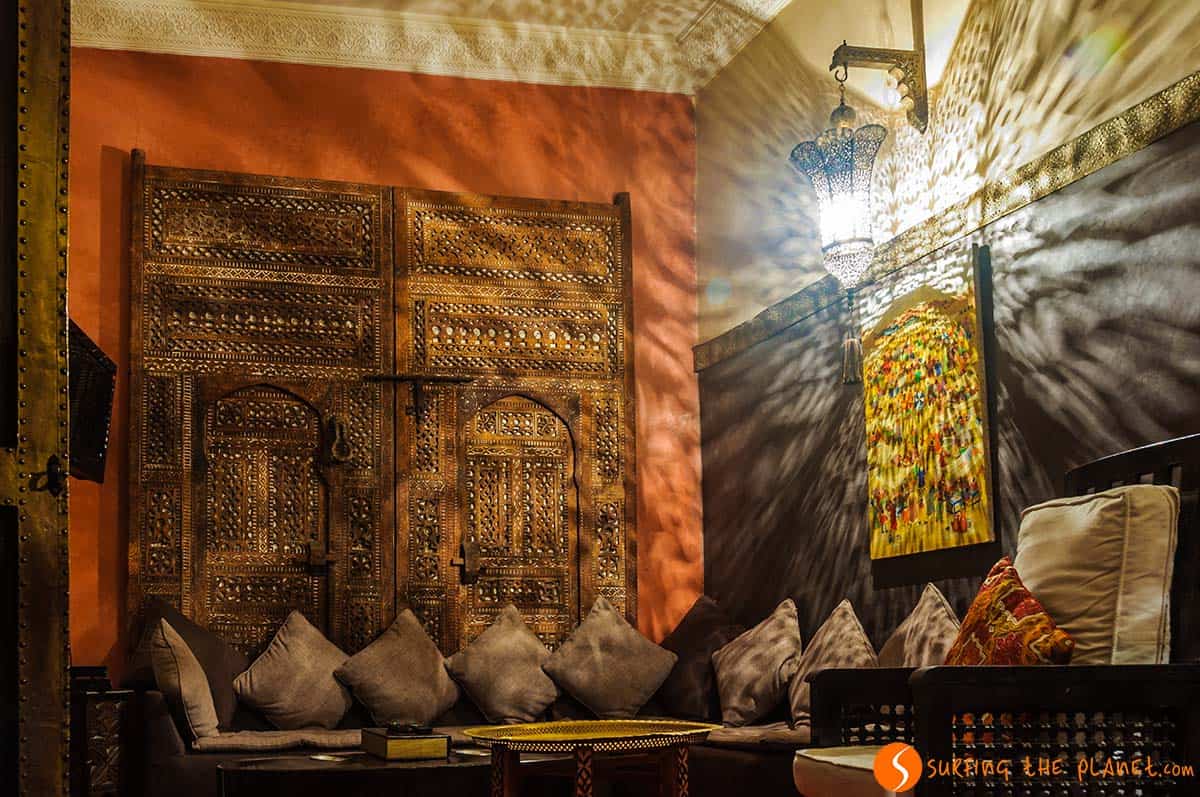 The roof-terrace was another favorite place of ours in the riad. An open space with tables and comfy lounge chairs, where every morning we enjoyed our delicious breakfast and where we relaxed quite often during the day.

We really loved relaxing in the incredibly comfy special armchairs in the shadow of a parasol, just staring at the beautiful flowers that decorate the terrace. As I am thinking about it now, it makes me want to go back instantly to this paradise. 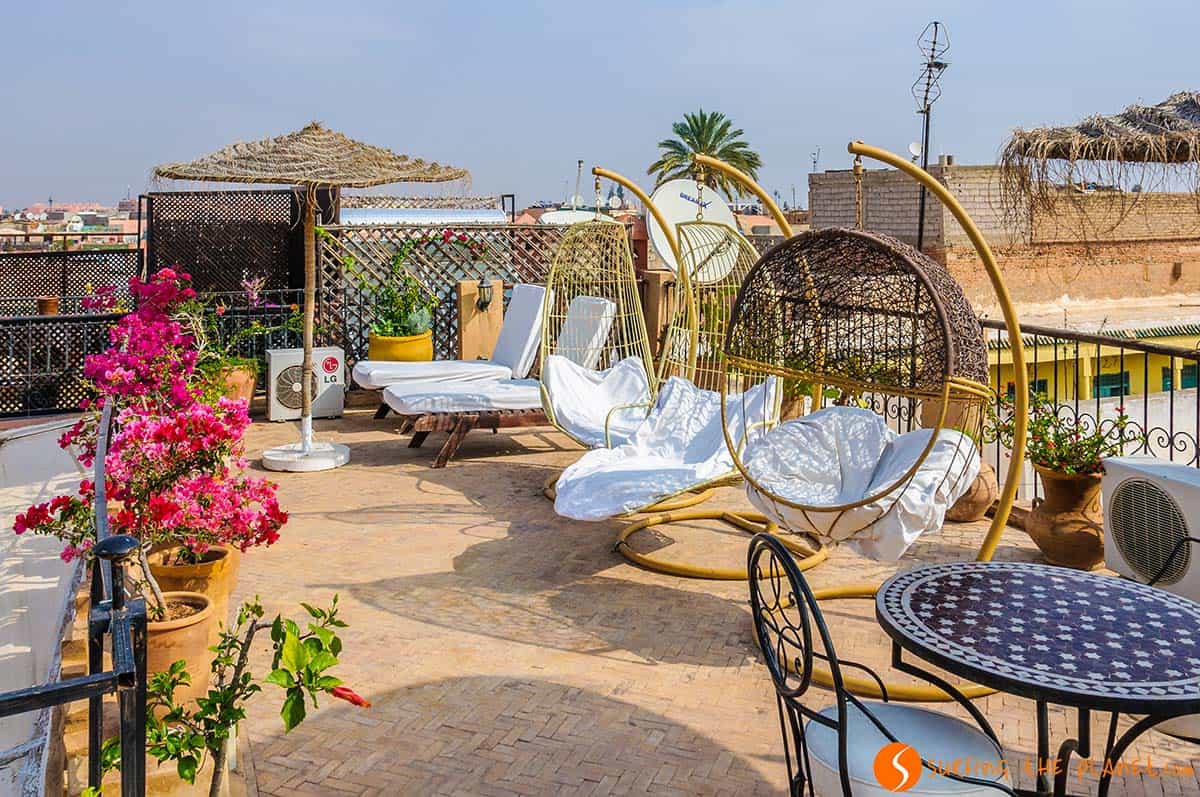 The Riad Mur Akush is a very intimate and charming riad. It only has 6 rooms, and each one of them is different. What they all have in common is that a lot of attention is dedicated to the little details to make them special in some sense. 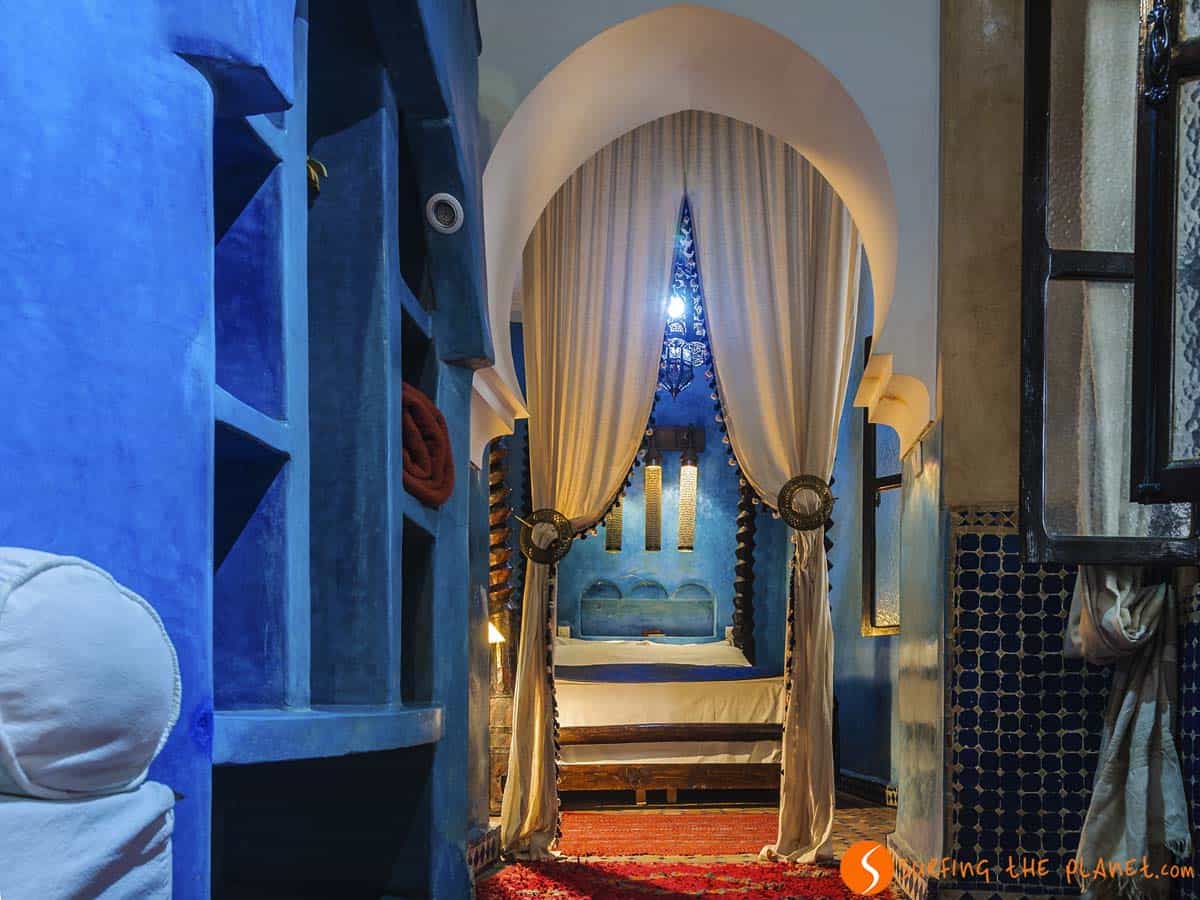 In the Riad Mur Akush, all rooms have a name, ours was called the Suite d’Olive, where blue was the dominant color. In the small living room there’s a Roman style sofa, and an arch with curtains separates it from our our bed that seems to have come from the Thousand and One Nights tales. We heard that the bedstead was made of wood coming from four different olive presses used previously in four different Berber villages. What a lovely story for a bed! 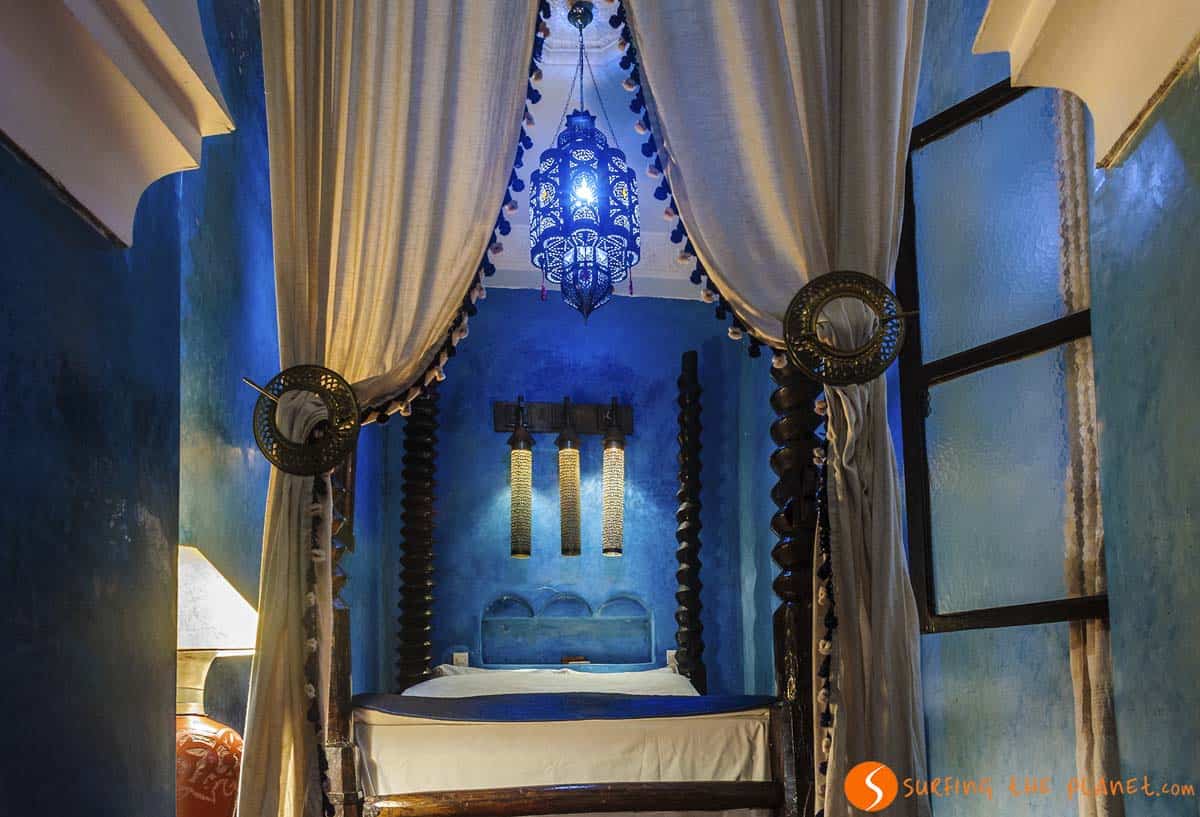 Usually we don’t dedicate too many word to the bathroom, but this one deserves a section for itself, as it was really impressive. The best and the most original was the shower, which was really huge and had clearly dark blue color. The particularity of the shower is that it’s made of stone and it has a completely irregular shape. It’s better to check it out in the picture, since words can’t really describe it well.

The breakfast and dinner in the Riad Mur Akush are a real experience.

You can have breakfast wherever you want, in the patio, in the living room or as we did on the terrace. We really liked having our breakfast in the open space, and the breakfast was varied and complete every day. If you eat everything, you might not need to eat again till diner, only of course if you don’t find anything tempting while you visit Marrakesh. The latter is quite improbable, hence there’s no remedy but to put on some kilos. 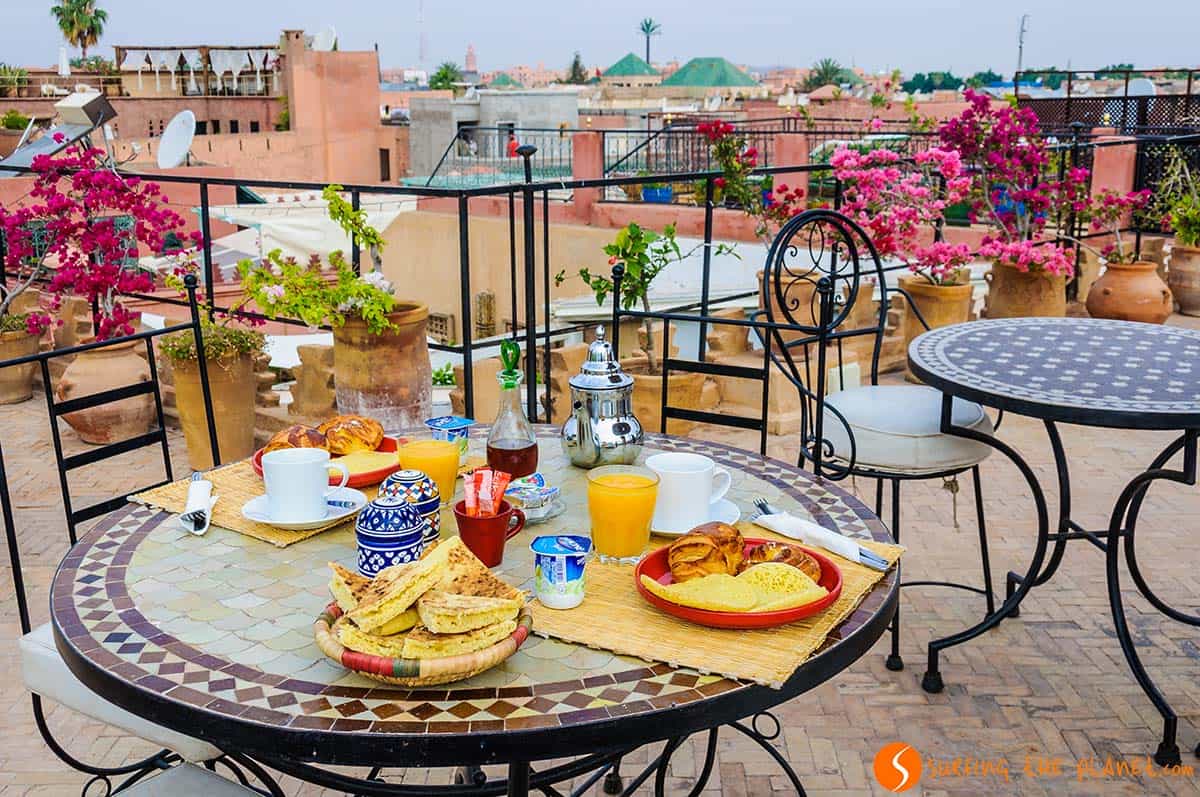 We also recommend you to try at least once the delicious dinner they prepare in the riad. We had a lovely three-course dinner with traditional Moroccan soup, a spectacular chicken tajine with lemon and olives, not to mention the delicious chocolate mousse we had for desert. 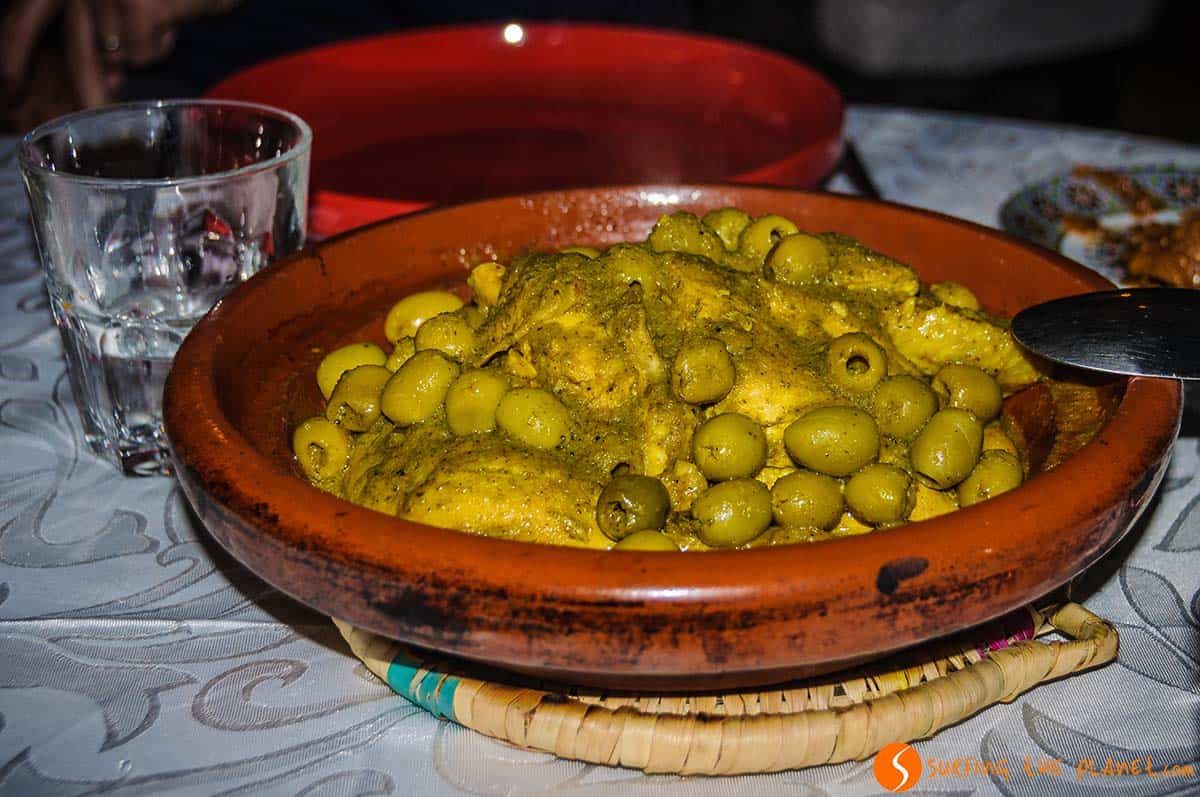 The people who work at the riad are all very kind and friendly, who make you feel comfortable in the riad. If you need something, they are always available to help you out, and to have breakfast listening to Mustapha playing the guitar, it’s something you can only find here.

At night the Riad Mur Akush changes completely, when the huge lamp over the courtyard and the other smaller are switched on. There are many diffuse lights there, which create a magical light show in the riad that will really transport you to the world of the Thousand and One Nights. 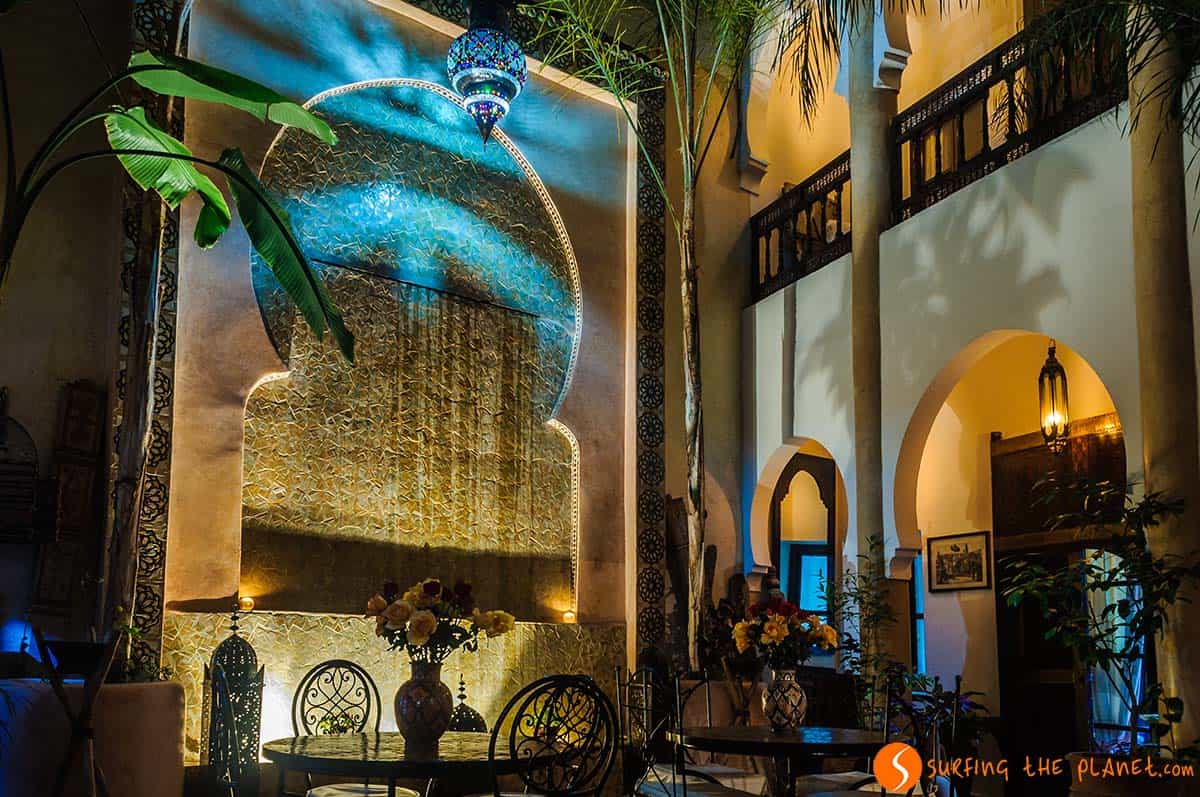 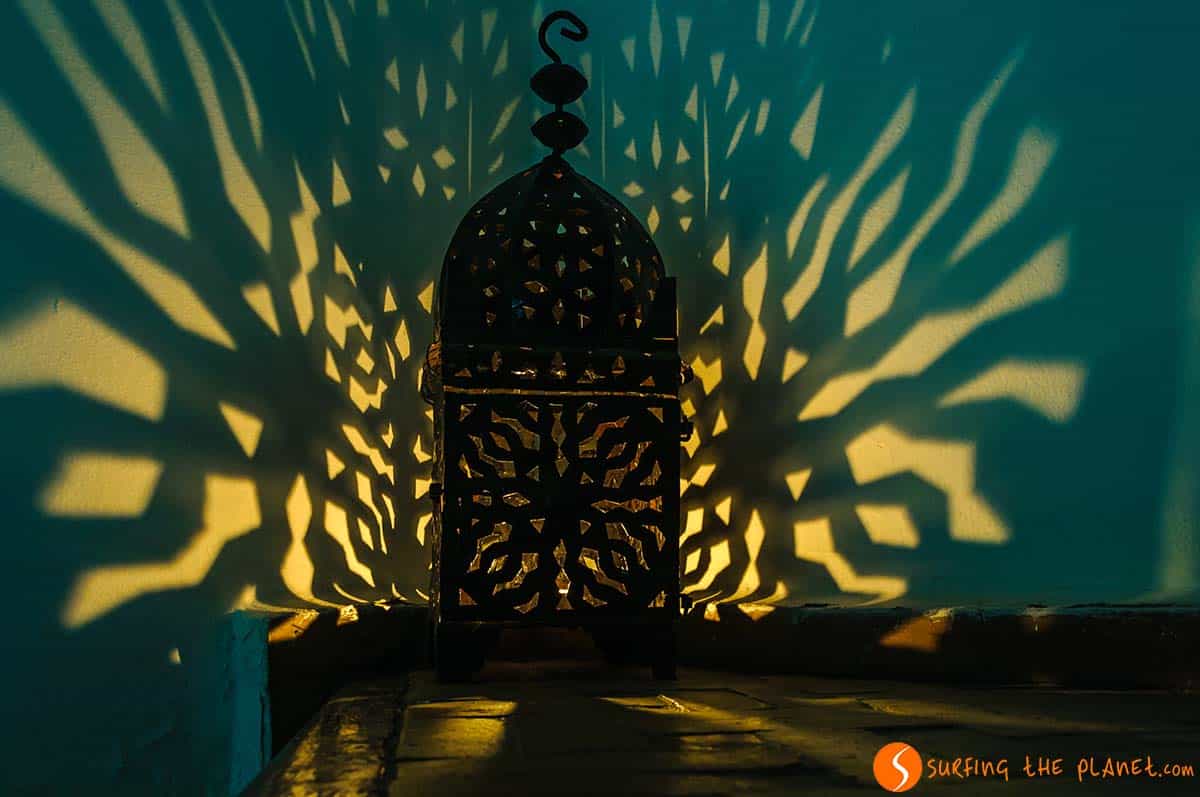 For us the Riad Mur Akush is a perfect place where to stay in Marrakesh, a place where you will enjoy lots of magical moments, being at the same time far from and close to the vivid and noisy life of Marrakesh.

– ZZZ… BOOK YOUR HOTEL IN MOROCCO – find the best hotel for you.

– BRUM BRUM… RENT A CHEAP CAR FOR YOUR TRIP AROUND MOROCCO – find the best car for you.