In our last post, we showed you many of the different kinds of activities that you can do in Perhentian, our favorite Malaysian island. We left out the beaches, which you might say probably matter the most. The island is very popular among local youngsters who spend their weekends there, but as most Asian people, they don’t like walking either. Hence, if you leave the main beaches, after a short walk or a kayak trip, you can easily find yourself alone on one of the many secluded beaches. This is what we loved the most in Perhentian, and in this post we will take you to the beaches of this tropical paradise.

The two main beaches of the island (where most people stay and where most of the accommodations are found) are Long Beach and Coral Bay. Long Beach is the most popular beach among backpackers, a beautiful long white sand beach. It is quite crowded in high season and this is where the parties take place. 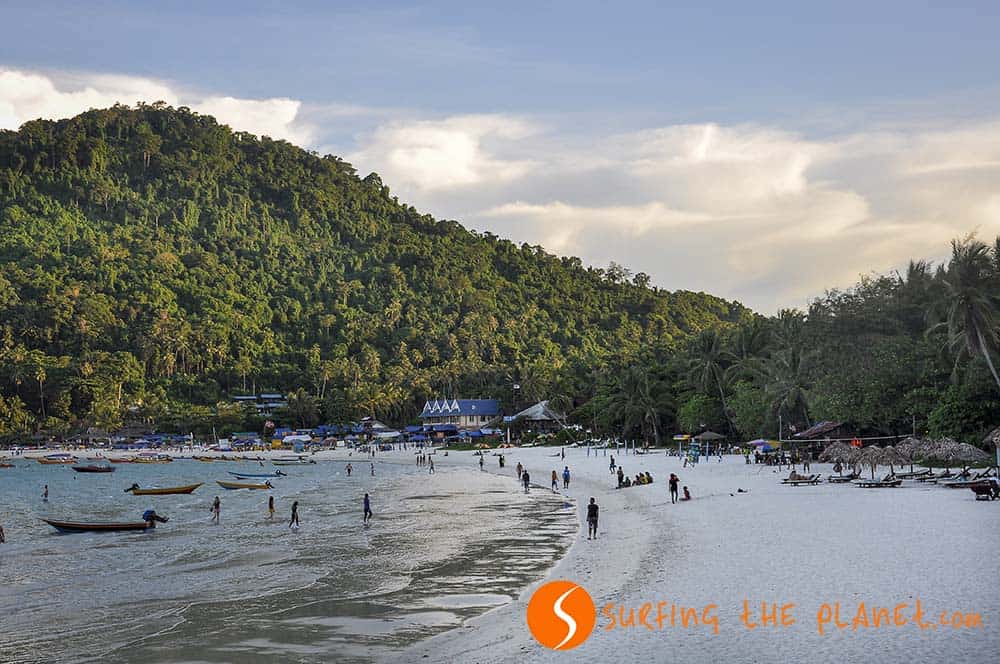 Coral Bay, where we stayed, is much quieter, is more a couple’s place. The beach is less gorgeous, however you have quite nice reef close to the shore for snorkeling. The sunsets on this side are absolutely amazing. 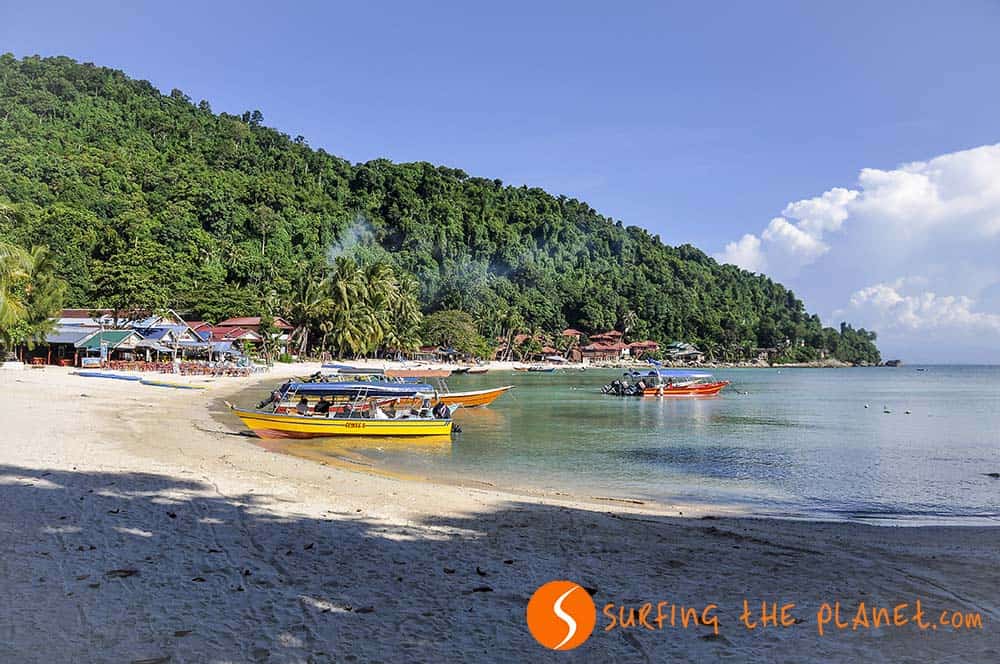 The beaches between Coral Bay and the fishing village

At the end of Coral Bay, a narrow trail leads to the jungle and an hour long walk in the forest can take us to the fishing village. Although the trail is paved and follows the coastline, we walk in the dense forest (mosquito spray is a must), and we can see some wildlife there. We can often meet monitor lizards, some of them are really huge! Fortunately they are afraid of us and run away as they see us.
After leaving Coral Bay, we arrive in less than a half an hour at a pristine beach (it does not have a name as far as we know), where many times we spent hours swimming completely alone in the crystal clear water or just lying in the sun (there is no shade in the afternoon). 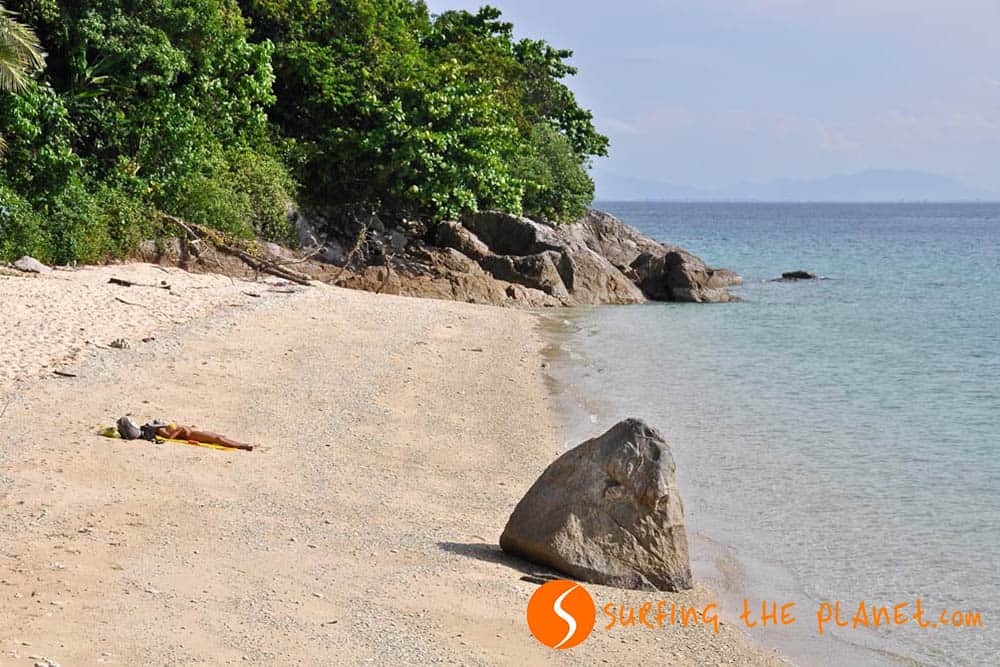 Five minutes more walk bring us to Mira Beach, a small beach where is a low-key resort with some bungalows. As most people spend their time on the terrace of their bungalows, resting in their hammocks, there is usually nobody on this beautiful beach either. 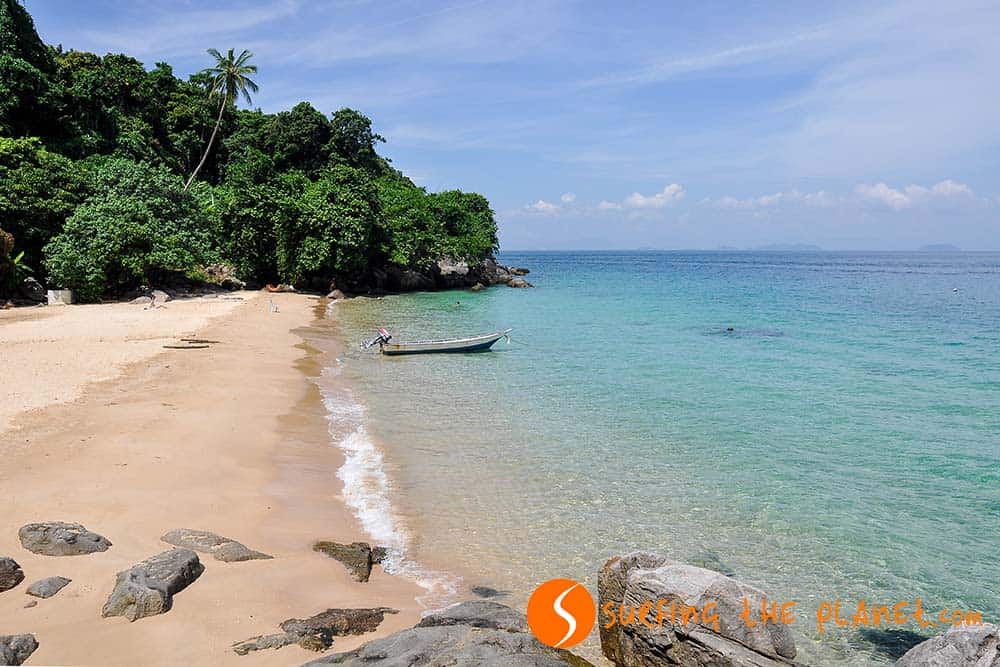 The last beach before arriving at the village is Petani Beach, a long one with palm trees. There’s also a resort here between the trees, but not so many people stay here. We found a clownfish colony just a few meters from the beach, and played with the “nemos”. There is also a nice reef not so far from the beach, and we saw a map puffer fish there, which is quite rare to find snorkeling. 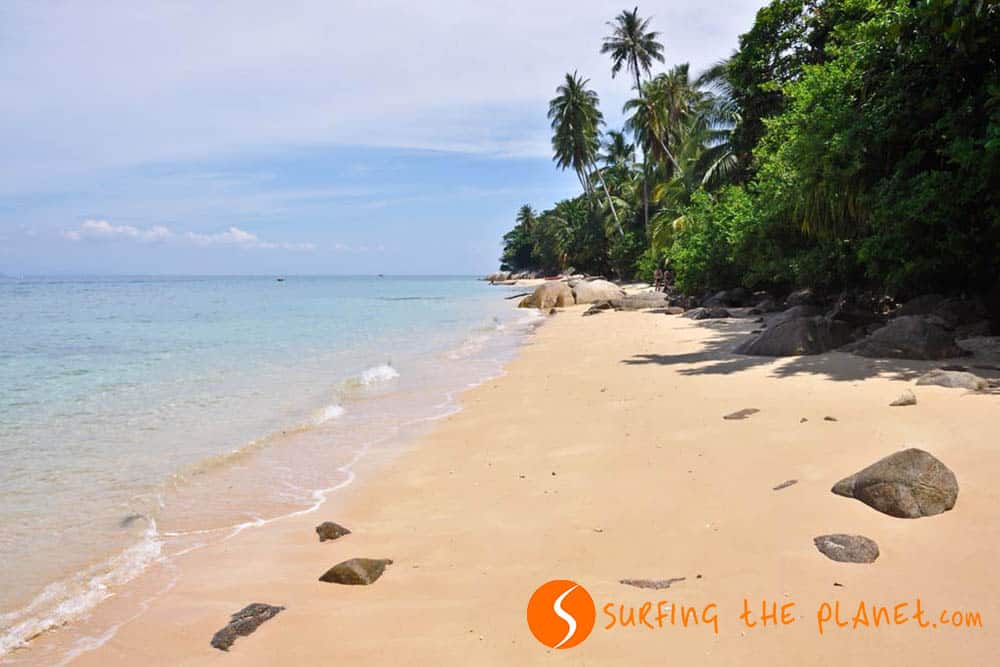 The beaches on the other side of the island

In the Northern side of the island, there are several small pristine beaches, which are usually deserted during the whole day. You can get there by taxi boat or after a short track, just as we did. The walk requires some effort as you have to climb a hill to get to the other side, and there’s no shade on the trail that follows the electric cables, so sweating is guaranteed! However, when you arrive at the top where the windmills are found, you will feel rewarded by the spectacular view. 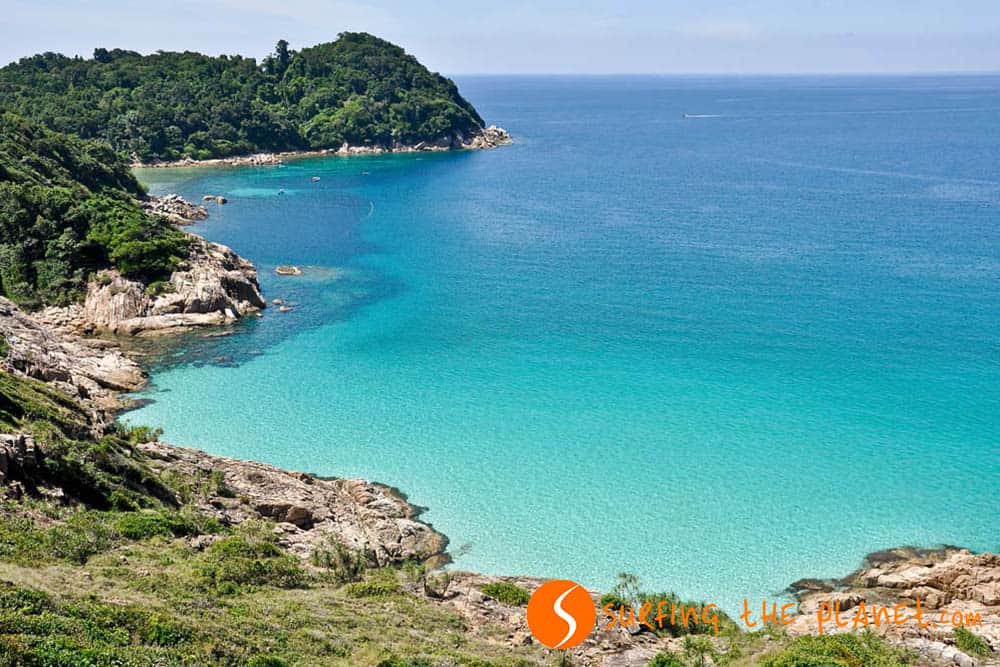 From the top we can take the stairs down (there are lots of them!) to a place where the water had a different color tone due to the white sand bottom, swimming there was just simply perfect! 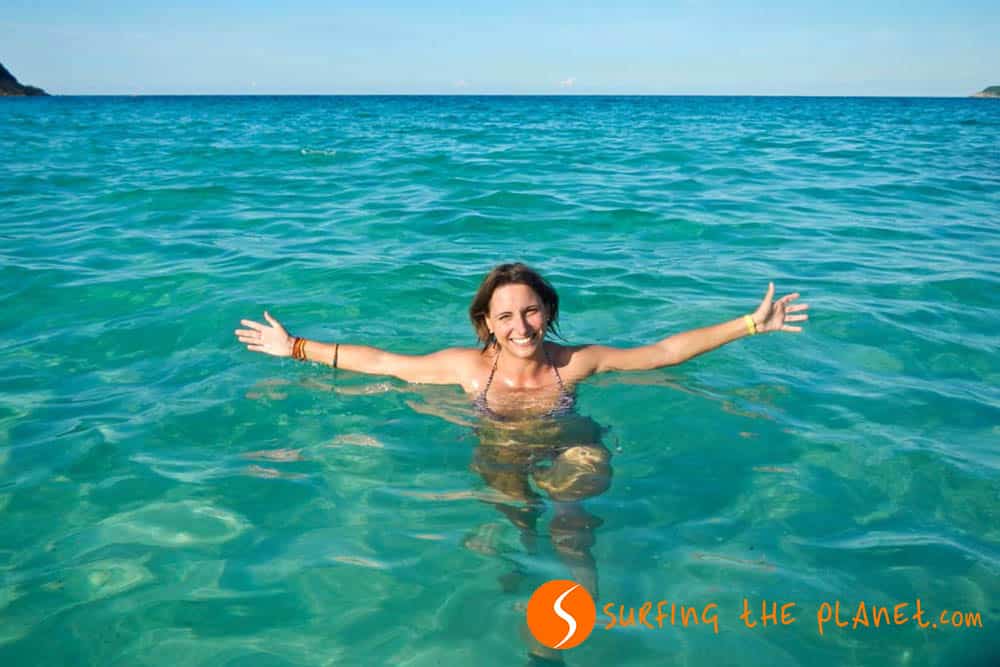 The other option from the viewpoint is to follow a narrow trail in the forest that leads us to three more beaches. In D’Lagoon there are also bungalows and it seems to be a cool place to stay for some nights, some of the bungalows are actually on top of the trees. There are two more beaches close by, Turtle Beach and the beach we liked the most in that part of the island, Adam & Eve Beach, where we spent some time enjoying solitude.

The most gorgeous beach on the island is the one called Romantic Beach, there’s no doubt about that. Many boats stop here during the snorkeling excursion, but they do it usually in the afternoon. So if you to take a taxi boat in the morning (you can also get there on foot after some serious rock climbing), you have a good chance to spend a couple of hours there without any disturbance from others. 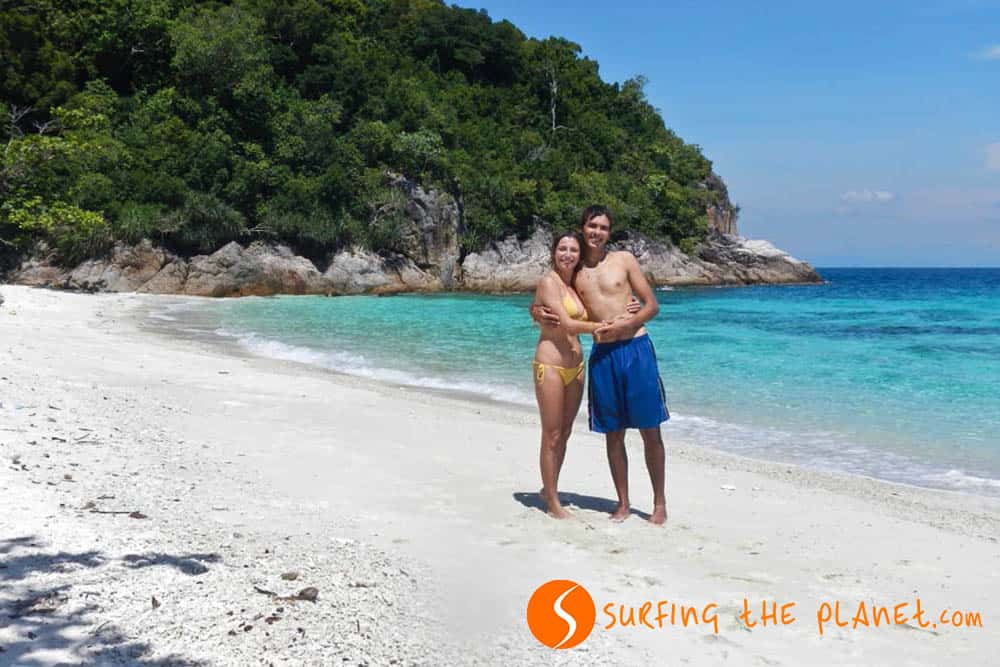 This white sand beach is simply marvelous, and we spent hours there just staring at the sea. It was a very special place for us, in cold dark winter evenings we often imagine being there. 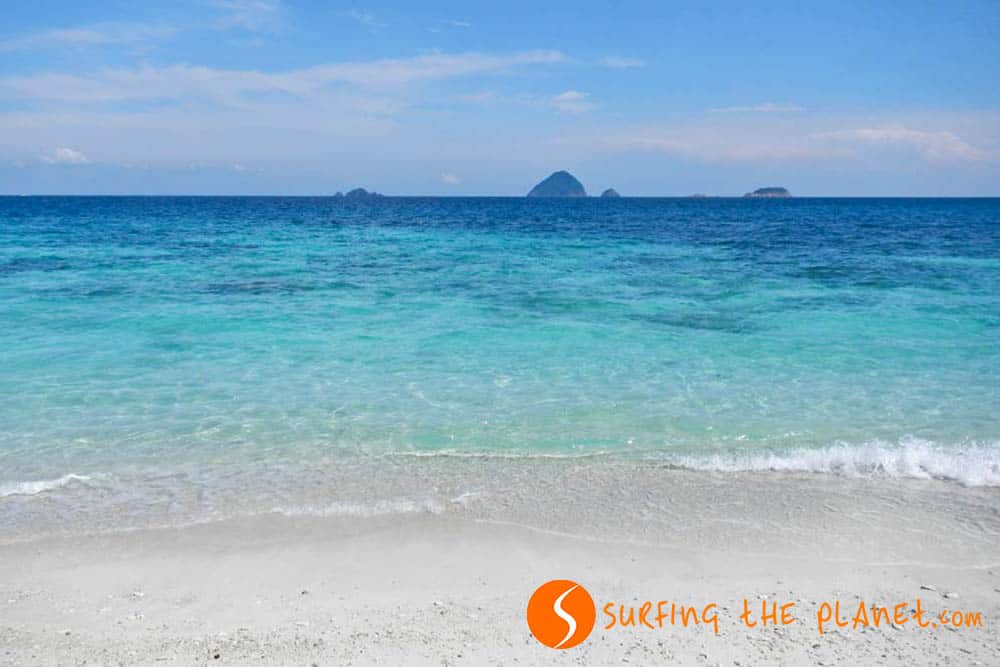 Where to sleep in Perhentian Island

The quality of accommodation on both Long Beach and Coral Bay is quite mediocre. A relative good choice on the main beaches is Bubu Resort on Long Beach. Nevertheless, the best place to stay on the island by far is Alunan Resort located on the South of the island (not far from the village), a luxury (and affordable) resort on a pristine beach.

Book your perfect hotel on Perhentian Island! Find accommodation that best suits you!

We don’t think that we have to convince you that Perhentian is an absolutely “must-visit island” in Southeast Asia! 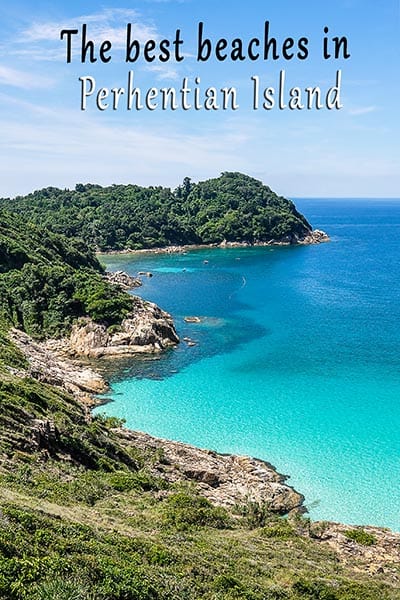 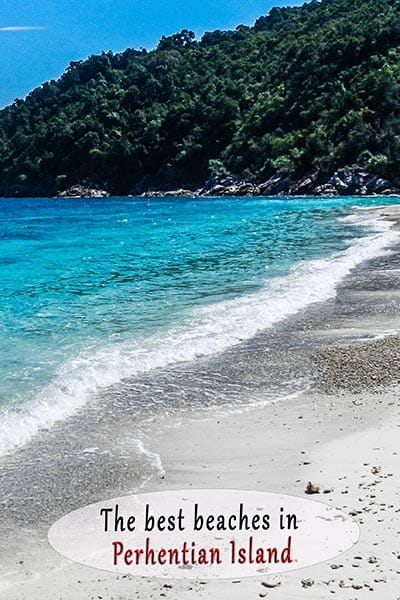 Artículo anterior An island so hard to leave
Artículo siguiente We present you Pulserita Viajera, the Traveling Bracelet