Home » Blog » Chile » Far from everything on Easter Island

Easter Island or as the locals call it Rapa Nui was undoubtedly one of the places that we waited the most to see in our round the world trip. The most remote habited place in our planet in the middle of the Pacific; an island that is full of legends and mysteries. A fallen civilization that was brought to almost complete extinction thanks to both the misuse of their natural resources and the diseases carried by the European conquerors. Easter Island now belongs to Chile (although it takes more than 5 hours by plane to get there from the mainland) but the still existing autochthones don’t consider them Chileans. They speak their own language which belongs to the Polynesian family and they try to protect their own culture.

Being a remote place, it is not surprising that the island is really expensive. We were lucky to have a friend’s acquaintance there who offered us one of his bungalows with a huge discount and we brought most of the food from Santiago to avoid spending 3 times more in everything.

We spent a week there which is more than enough to explore all the little hidden corners of the island. Local people live in the small town of Hanga Roa that is situated in the Southwest corner of the island and the rest is basically inhabited. The island has a really special atmosphere that captures your imagination. Everything is so calm and quiet, only the clouds run fast on the sky. As rainy and sunny moments alternate with each other, rainbows are so frequent on the sky that we haven’t seen anywhere else. 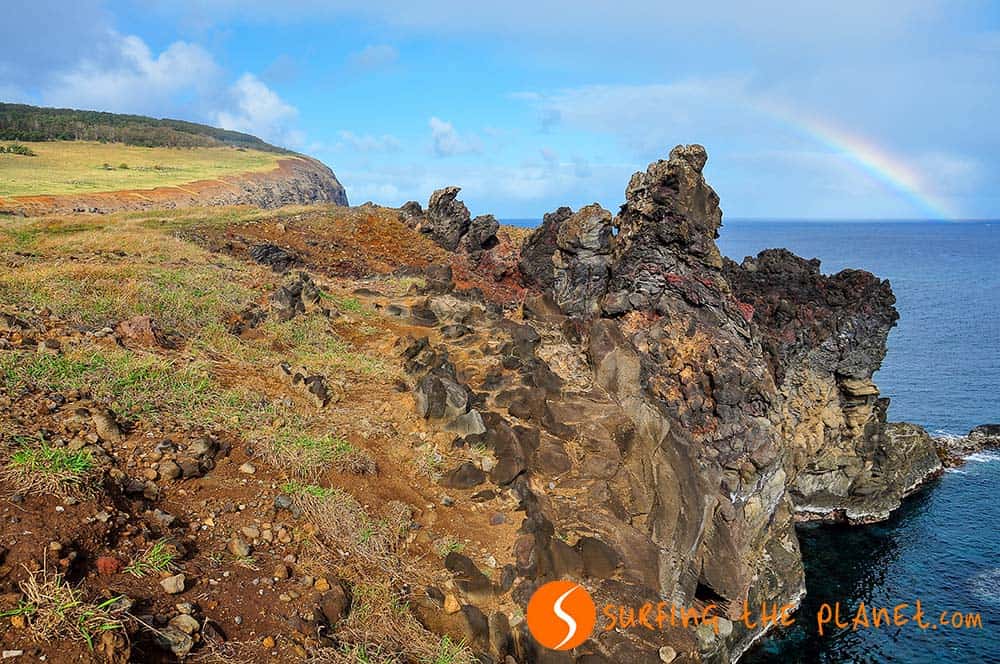 Some of the interesting places are found close to Hanga Roi, so we could get there on foot. We climbed up to the crater of the Rano Kau volcano where amazing scenery was waiting for us. At the bottom of the crater there are some small lakes – so colorful scenery for a volcanic crater! 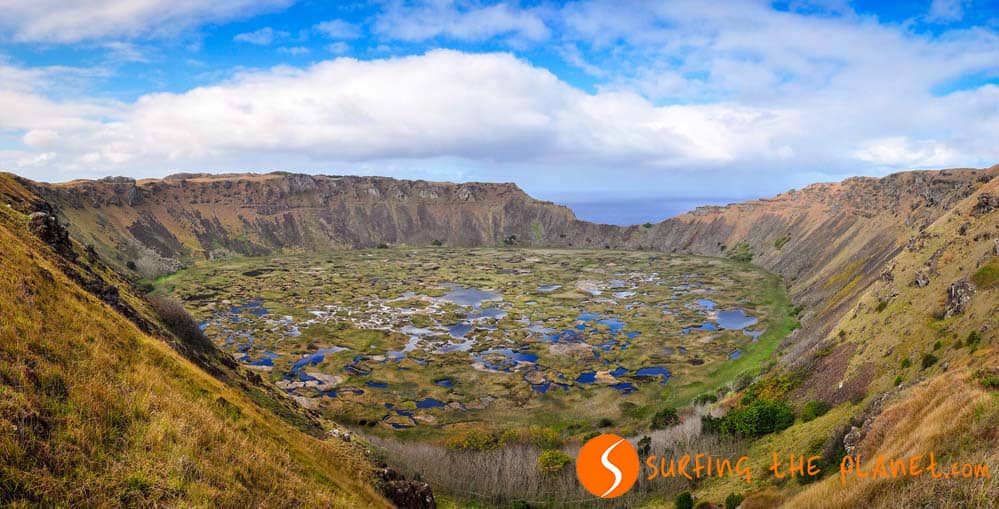 Near the crater we can find the rests of Orongo, an antique settlement. On the other side of Hanga Roi we had our first encounter with the famous statues called moais, which are the symbols of the island. There are still various legends, theories about these statutes. No one has a sure explanation about why they built them, how they moved them and why they didn’t finish most of them. The area of Tahai is perfect to see the sunset, as the sun goes down just behind the moai statues, really wonderful! 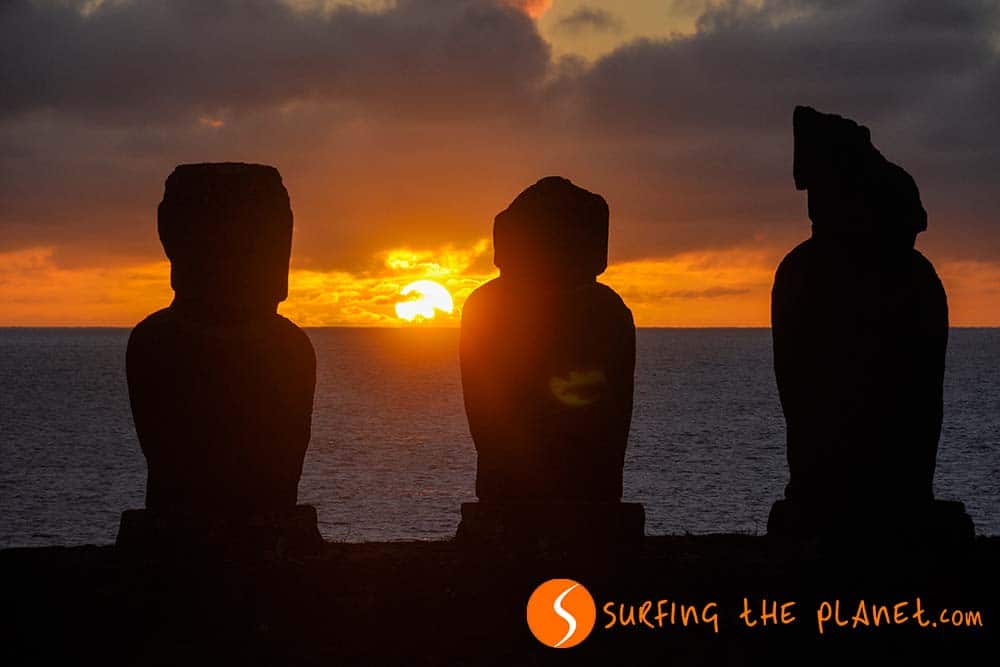 The best way to explore the island is renting a small motorbike. Bicycle is another option, although sometimes the strong wind and the ups and downs might make it a tiresome way of moving around. Moreover, the island is a tax-free zone, so fuel is basically the only cheap thing on. We were there in winter, so it was really low season, and we found ourselves alone most of the time. Finding nobody on the roads was also great for getting used to riding a motorbike (later in Asia we really became pros in that). 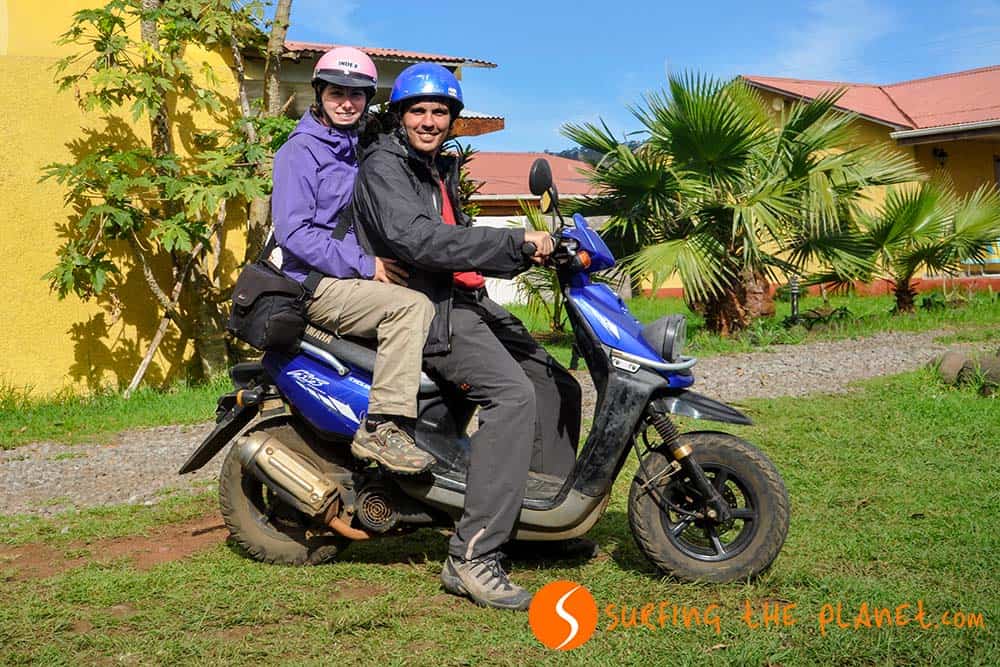 On the Southern part of the island there are several archeological sites to visit. Vinapú, Vaihú and Akahanga are the most important ones, in these sites most of the moai statues have already fallen to the ground and we can also contemplate the ruins of some ancient altars. The colors of the island are so intense: the harmony of the lively green of the grass and the vivid blue of the sky are interrupted sometimes by a group of wild horses running around. You really feel far from everything. 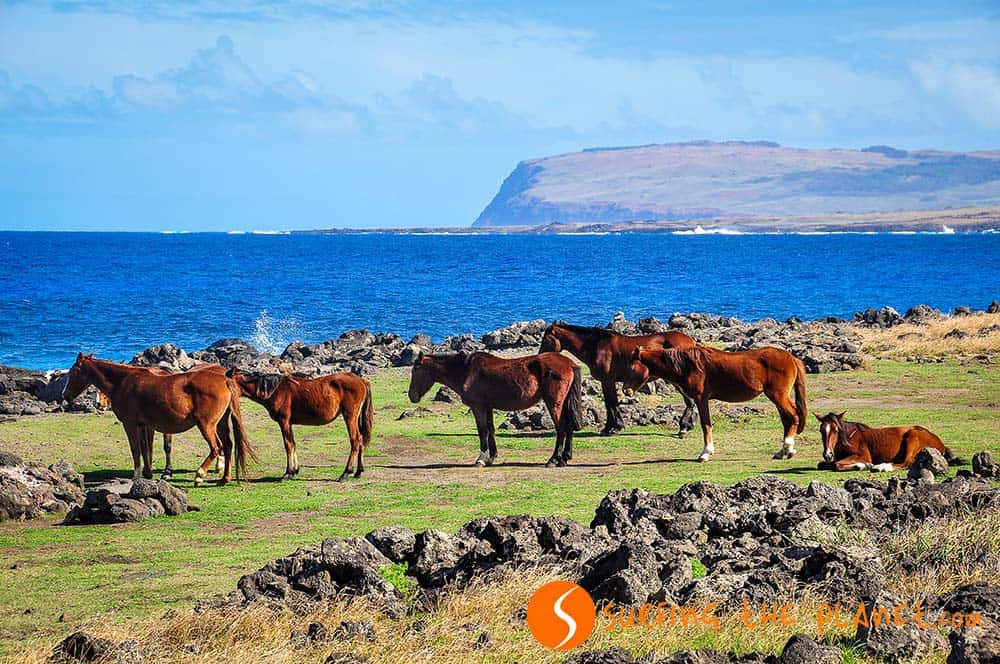 Probably the most important archeological site is found on the side of another volcano, Rano Raraku where all the moai statues were built. Here we can see many different types of moai statues. It is worth spending here a few hours to walk around and to observe these statues that make this island so unique. 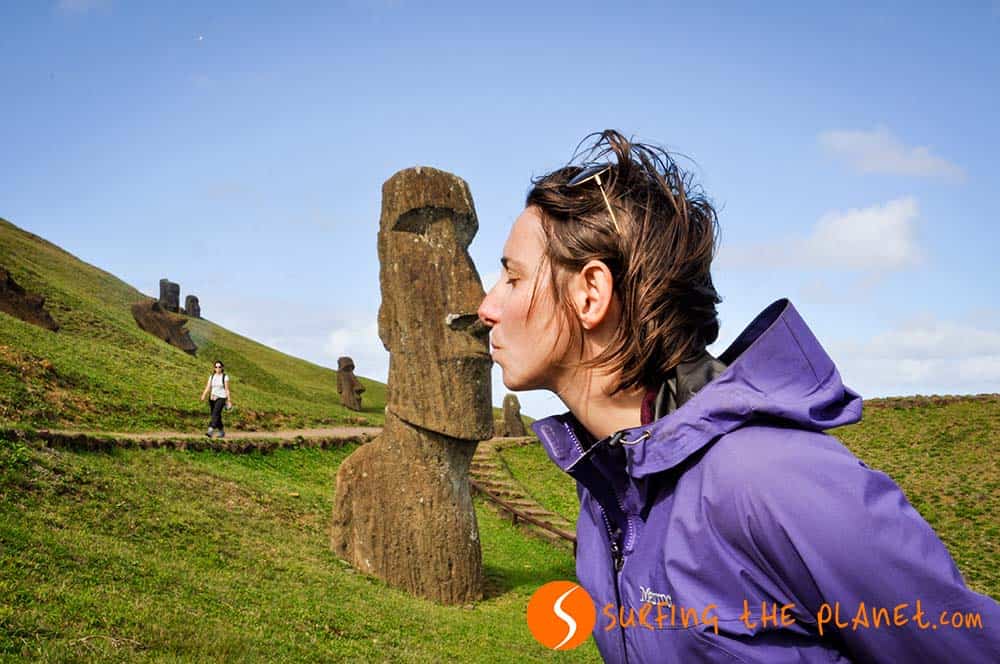 From the top of the volcano we can already see the Tongariki Bay, which is probably the most photographed point of the island. Here there are 15 impressive moai statues just on the coast. All the statues have a different “personality”, we spent here a lot of time although we knew that we would come back next morning to see the sunrise. 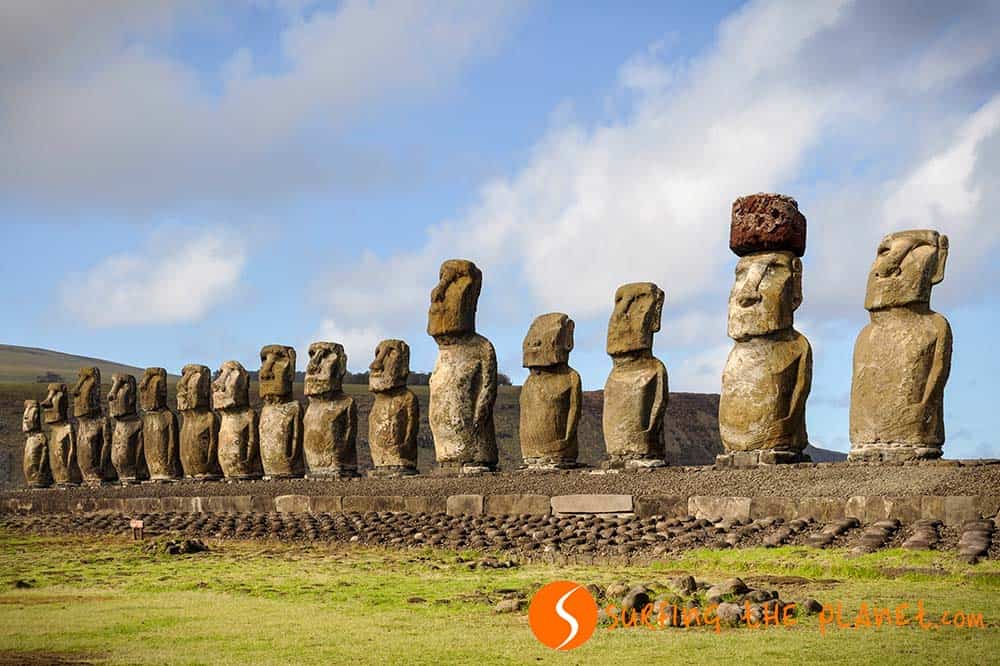 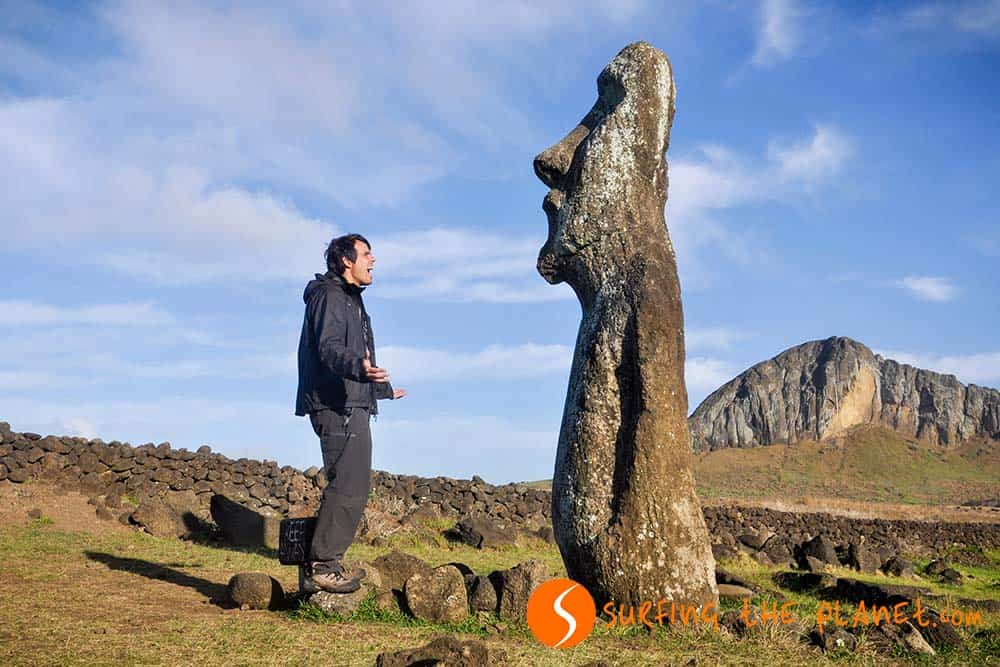 We woke up two consecutive mornings to see the sunrise in Tongariki, although it was already amazing the first time. It is a spectacle of lights and colors in such a unique place that deserved the effort of waking up early and riding there on the dark roads. The colors were gradually changing from orange through pink to purple and when the sun finally rose behind the rocks, the few clouds simply fled. These are probably one of those images that will never be erased from our memories. 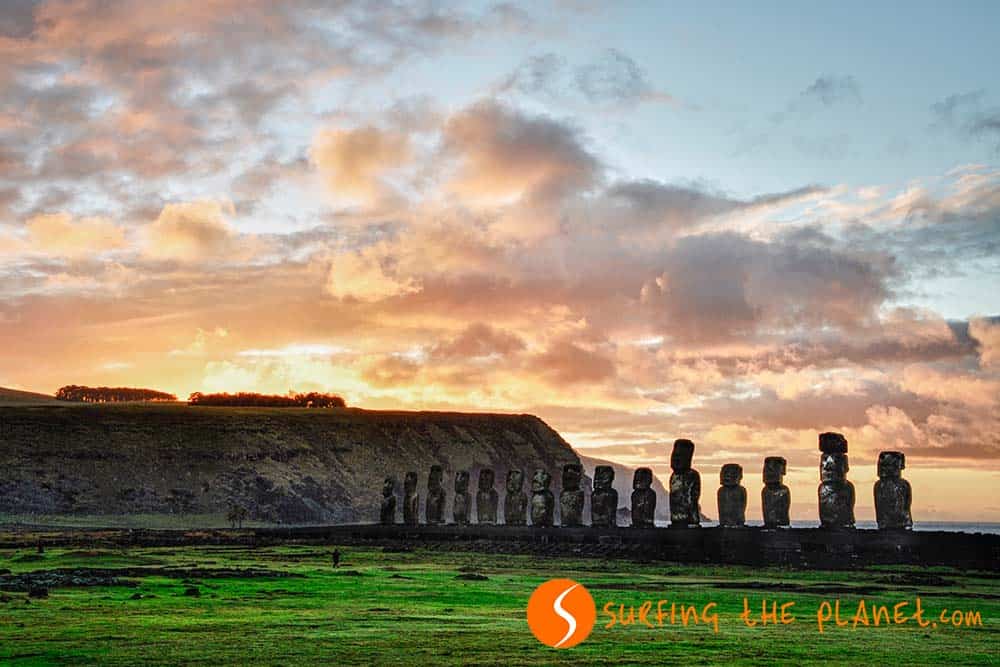 The Northern part of the island also hides some interesting spots. In Papa Vaka we can see some rock engravings, and nearby we visited a stone which is considered to have special magnetic properties as it makes compasses behave strangely. 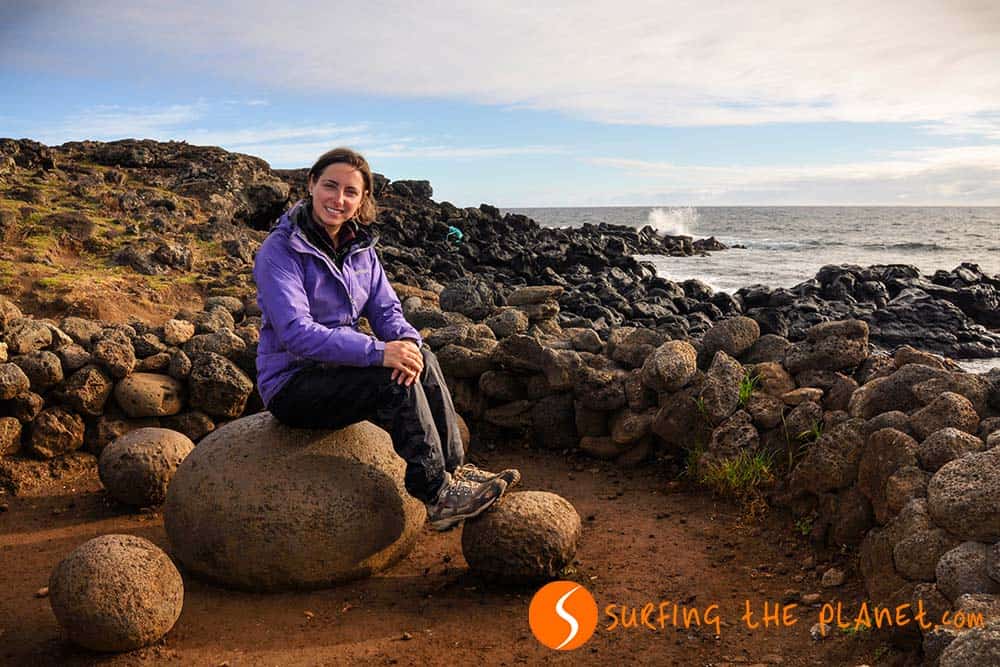 In the North we find Anakena Beach, the only real beach of the island. It is a beautiful  white sand beach and palm trees, and the peculiarity is given by the moai statues as guards of the beach. 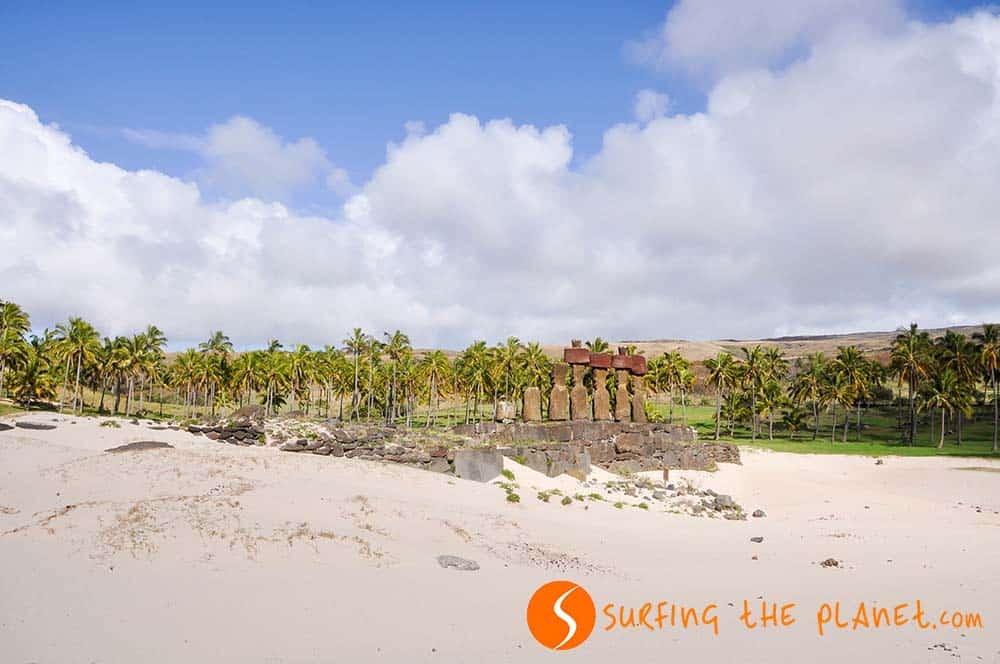 We visited Puna Pua, where the hats of the moai statues were made and also Ahu Tepeu where we found the only group of moais that are facing the ocean. What we loved the most was getting lost on the dirt roads and enjoying the feeling of being in such a remote place. 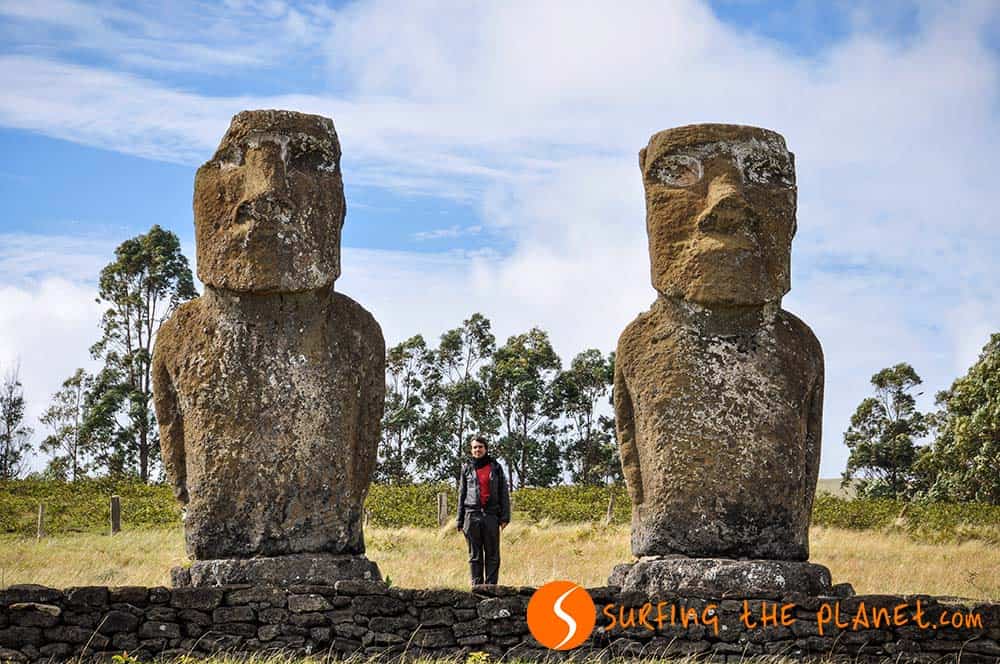 It is expensive to get to Easter Island, the tickets are not cheap even in low season, but we think that it is really a special hidden corner of our planet that is worth visiting. It is colorful and mystical at the same time.

What was the place in your travels where you felt the farthest from everything else?

– ZZZ… BOOK YOUR HOTEL ON EASTER ISLAND – find the best hotel for you.

– BRUM BRUM… RENT A CHEAP CAR FOR YOUR TRIP IN EASTER ISLAND – find the best car for you.