The best things in your travels always occur, when you leave the beaten path, when you don’t know what to expect to happen. It was always the same for us in our round the world trip. These are the moments, which always give you unforgettable and unique experience.

When we were Cusco, apart from Machu Picchu and other Inca ruins, we wanted to see how Quechua communities live their life between the Andes. Most people in Peru have Quechua origins, but the majority of them were Hispanicized and only small part of these people live as their ancestors. In Cusco we were hosted by Willy (a local Couchsurfer) who really cares about the history of Quechua people, he speaks their language and he can share many stories and legends with you.

When we told him our intention, he recommended us to go to Patacancha, a small community in the Andes, just a few hours from Ollantaytambo, one of the famous Inca villages. We knew from Willy that public transport is available only a couple of times per week, so we would probably have to find our own way to get there.

In Ollantaytambo, after buying some sugar, bread and fruit as present for the people in the community, we looked around asking for transport. There wasn’t any public transport that day, only local taxis offering you a trip for fees that we could not permit. So what to do then? We asked a local policeman, and he told us that in just a few minutes a car from the local council would go up there, as they go once in a month to bring food and medicine to the small communities. We asked for a lift and naturally offered help in the delivery of the boxes. Unbelievable, but it seemed that we arrived on the perfect day!

We got on the jeep, and quickly left civilization behind, as we started to climb the steep dirt roads, which were in awful conditions. After an hour and a half, we arrived in Huilloc, the first community on the road. There was already a van there with the doctor from Ollantaytambo who was also on his monthly visit. What we saw there, it really blew us away! All the women (not a single man) and children of the tribe were waiting there, all dressed in their typical, colorful traditional clothes. Looking at all these people in these bright colors gave us an indescribably delightful sensation. You can see people wearing these clothes in Cusco and other places for the tourists, but here they really still wear them as part of their local tradition. 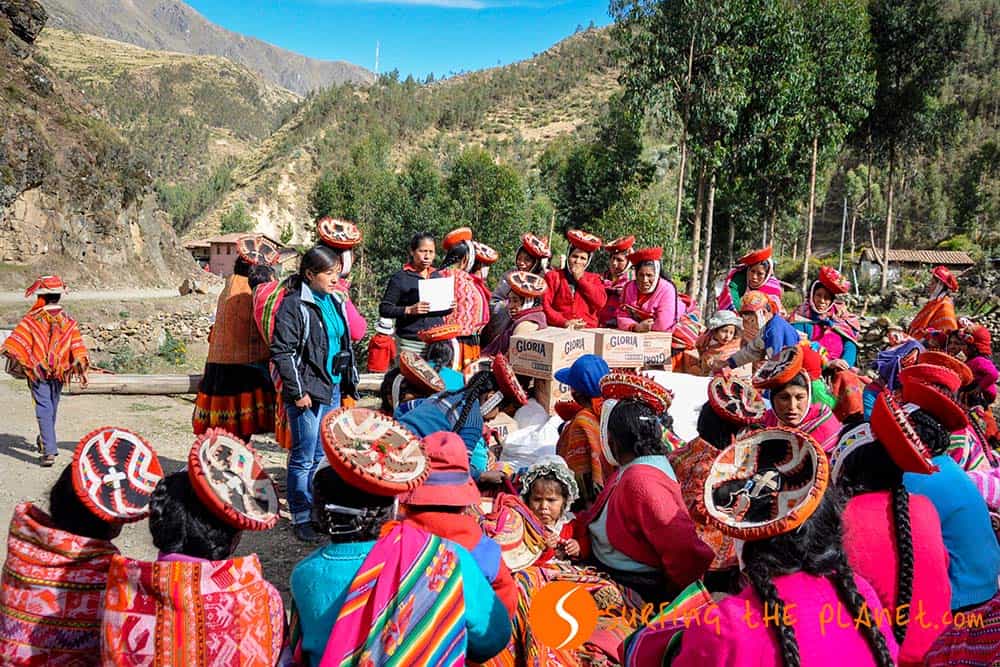 While we were helping there, most of the kids came to us, while the mothers stayed in their place, although many of them smiled at us. We took a lot of pictures, especially with the children who were really interested in our camera, all of them wanted to appear in some of the shots. We laughed a lot with them, though we had to use gestures to communicate, because these kids (like most of the people in these tribes) speak only a couple of words in Spanish, they only speak the local Quechua language. There was a group of little girls, who were especially friendly with us, they let us held them in our arms and smiled at us the whole time. 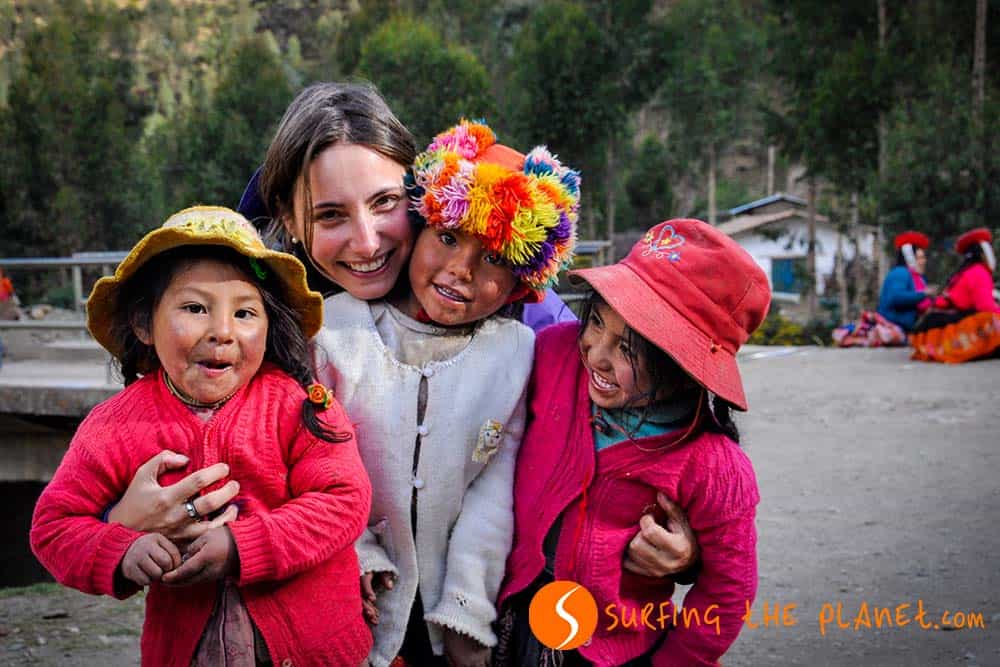 The women were just patiently waiting for their turn to get their portion of milk and flour, talking among each other and some of them making clothes of wool. They don’t buy any raw material for their clothes, but use animal skin and natural dyes. 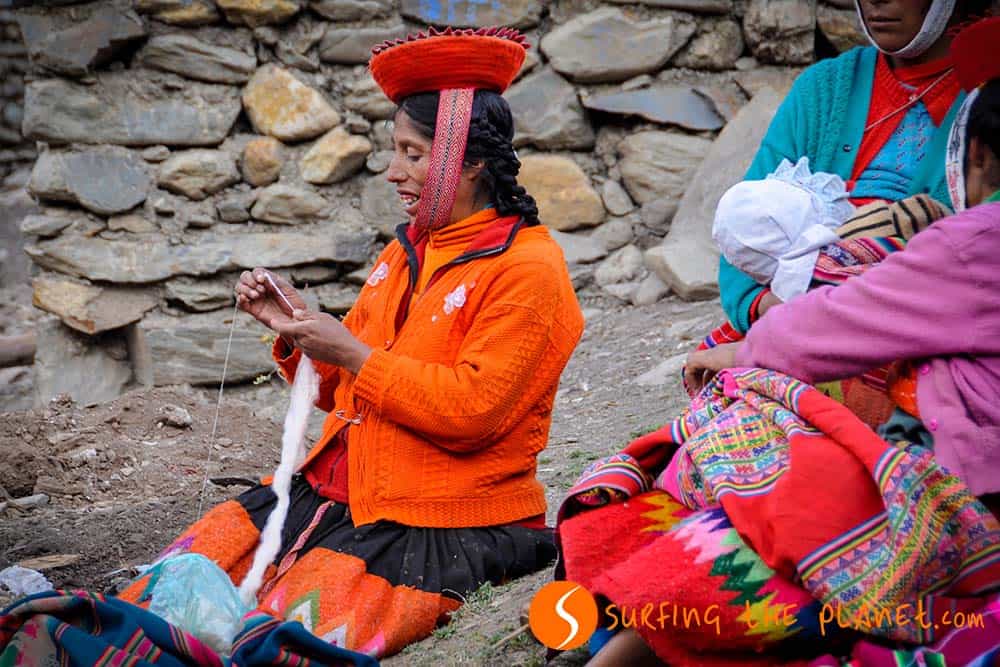 We had some time then to have a chat with the local doctor, who explained us that these communities are really poor. As the weather conditions are rather harsh here (high altitude, cold temperature and little sunshine), they can basically cultivate potatoes and herd sheep. We were so impressed by seeing these people in the 21st century living so isolated from the rest of the civilization, keeping their language, local costumes and clothing!

Having left Huilloc, it took a couple of hours to get to Patacancha. When we arrived, we didn’t see anyone around, but soon appeared Juan, who was some kind of a local chief. After helping with the delivery of the boxes of milk and flour, Juan took us to his place. He is one of the few people in the community who speaks really good Spanish. 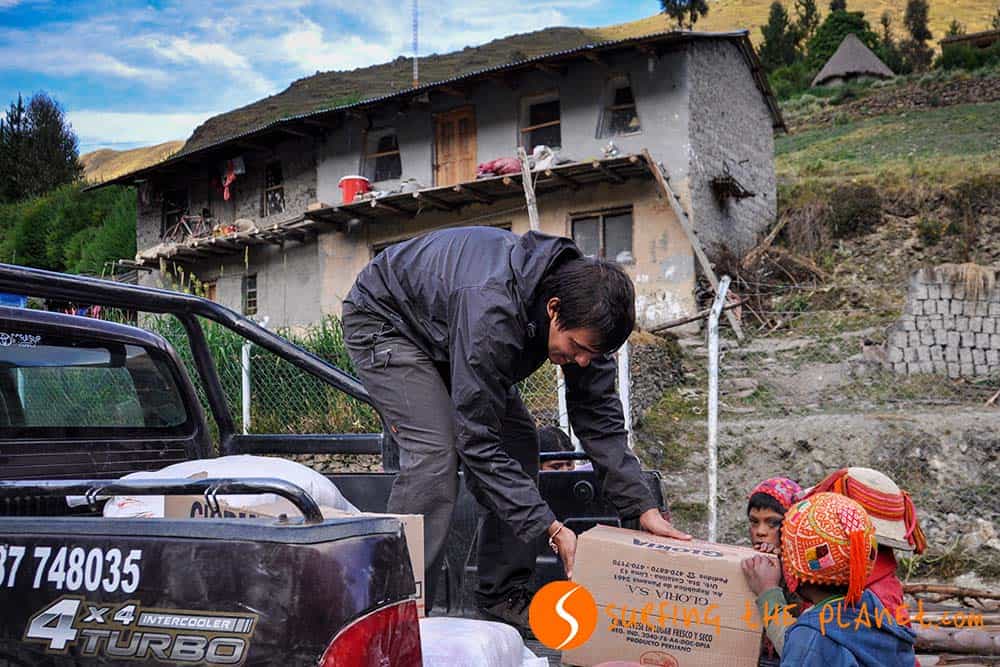 Juan, his wife, Elena and three children live in a house built by him. Before, Juan and Elena lived in a much smaller house, in which everything was in the same room. In one part there was the fireplace, and on the other side there were the beds and under the beds place for the animals (dogs and guinea pigs). Juan referred to this time as “our life in a family with our animals”. When his first son, Alberto, was born, they started to build a bigger house just next to it. Now there former house serves as only kitchen, where we spent many hours cooking near the fire. 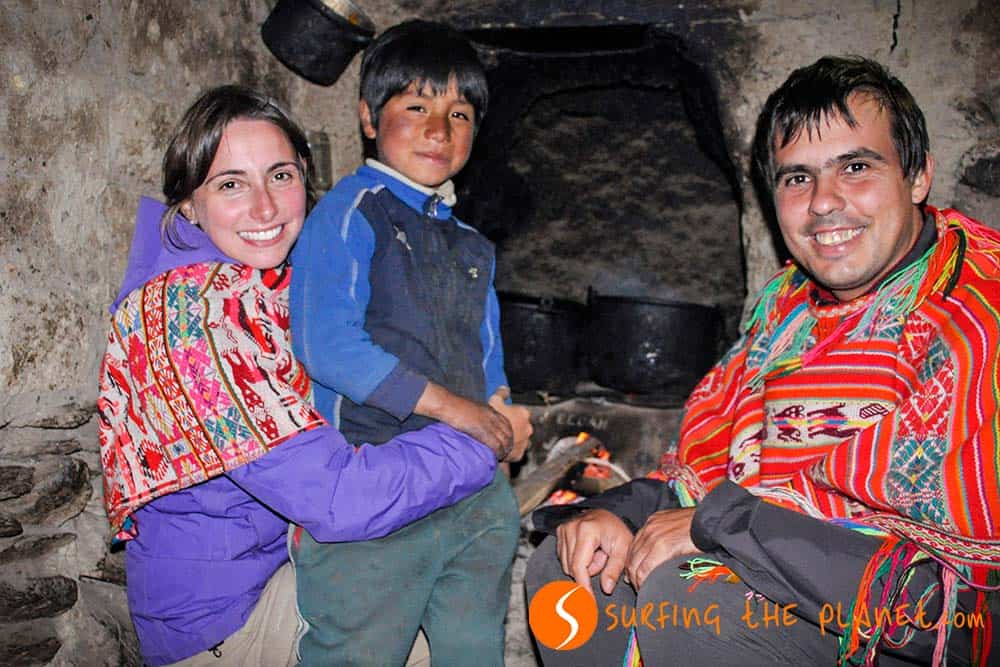 We needed many blankets, as the nights are crazily cold up there. It really made us feel puzzled to see that in spite of the cold, they don’t wear socks or stockings. Even the smallest children have their skin burnt on their face because of the cold and the sun, so as the skin on their feet. We felt some shame for them, but it is their local culture, and we have to respect it. 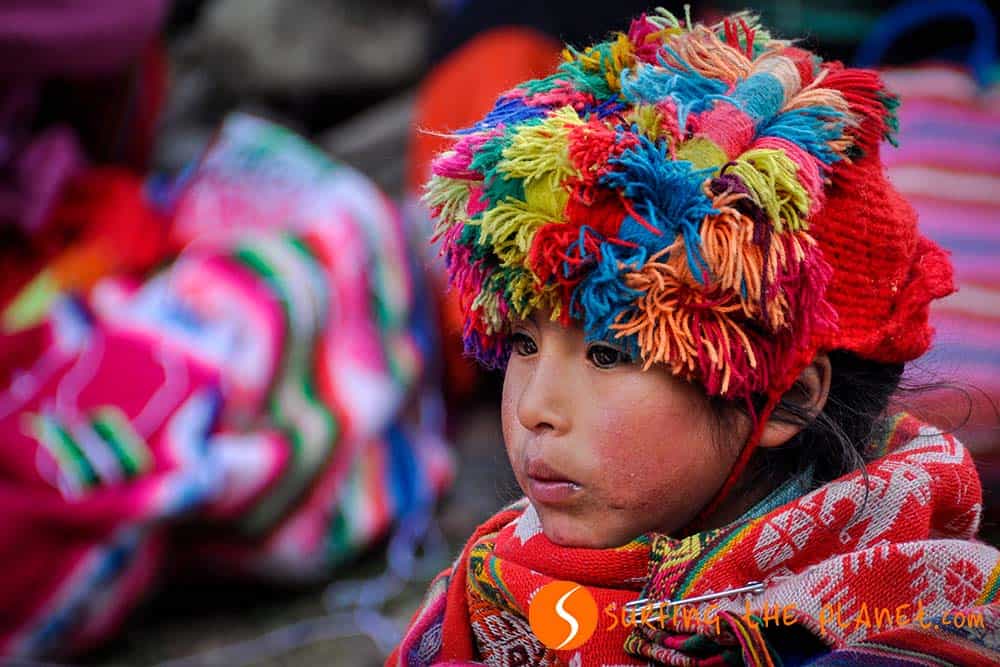 We had a really marvelous time with the family. When we arrived, Juan was alone at home, as the rest of the family was out in the mountains herding their sheep and cows. We went to look for them to the other end of the village, and we also looked around a bit. The eldest brother Alberto (who also spoke Spanish), a really smart kid, was much more mature than you would expect from a boy of his age. He cooked without help, while he took care of his little brother and sister at the same time. We prepared a delicious potato soup with vegetables, and the hot dish gave us a lot of satisfaction in the cold of the night.

During these days we could also get some insight into the life of the community. Alberto and Juan explained things about their daily routine, for example the rules for the clothes they have to wear (different colors have different meanings) or what they study at school (mainly practical things). During those days there was a huge argument in the community, since two youngsters had escaped a few days ago from the tribe and they had an accident. The mothers were shouting between each other, blaming the other for the things that happened. They had an everlasting gathering in which tried to do justice, without too much success as we heard.

Throughout the time we spent in Patacancha, we had the chance to participate in all kinds of activities done by the locals, while we were dressed in their beautiful clothes. We helped in the selection of the all sorts of potatoes. 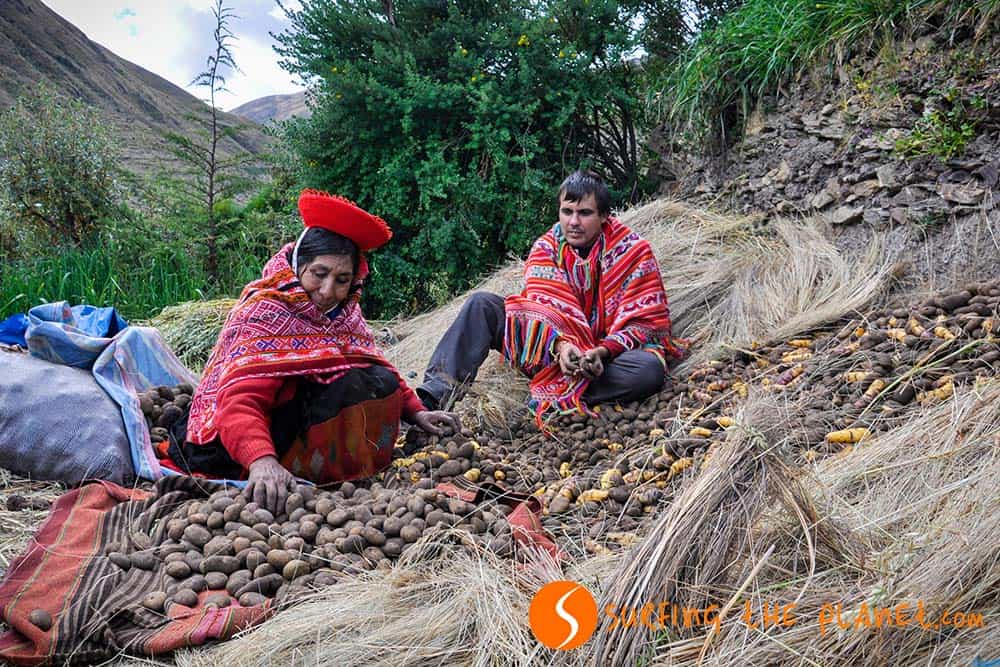 There are really many kinds, which differ in shape and color, and they cut them differently and use them for different purposes. We have never seen so many different types of potatoes! We also helped in herding sheep. Rachele, being the main shepherd, almost lost a part of the pack, as the sheep escaped uphill. Elena just arrived in time to get them back, and we laughed a lot at the incident. 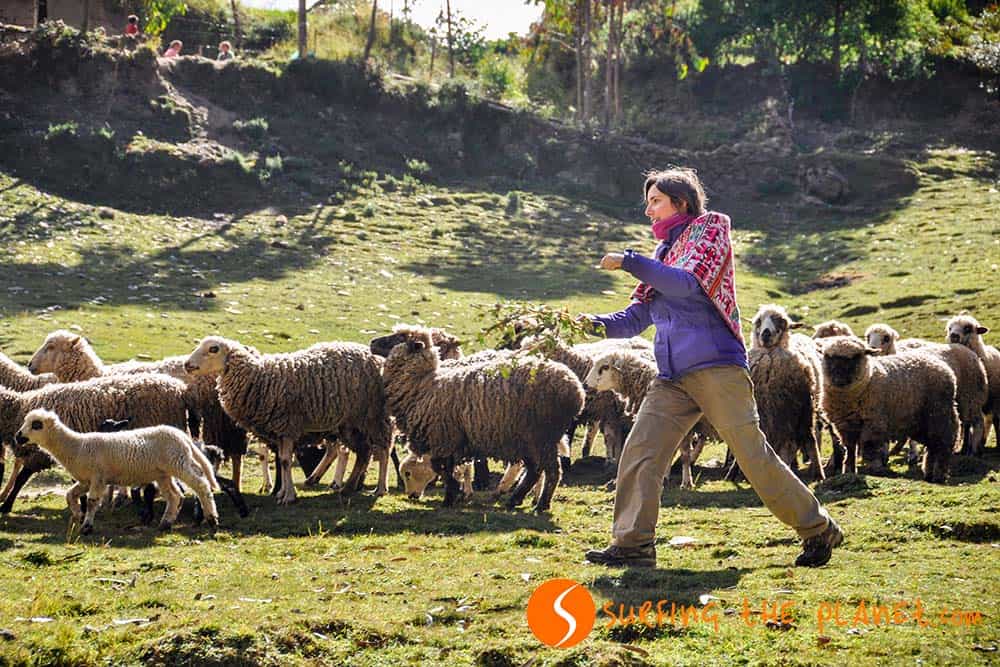 The rest of the time we played with the kids, Madaline, the little girl was especially fond of Gábor. She spent a lot of time in his arms, she even fell asleep sitting on his lap. 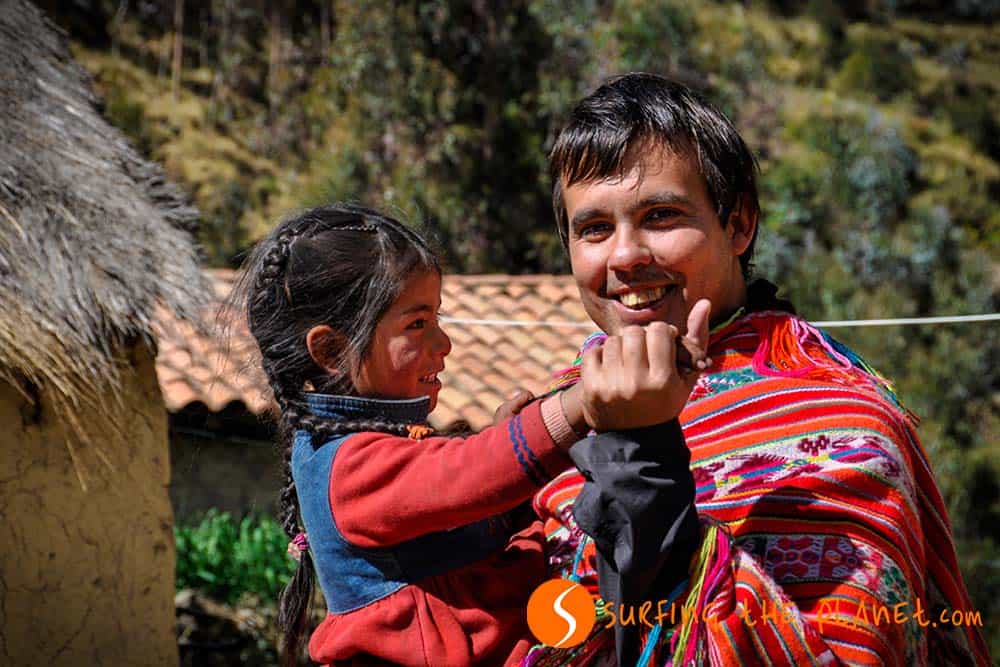 We had the chance to meet some of the older women in the tribe, for example Elena’s mother was always smiling at us, even though we couldn’t communicate with words. 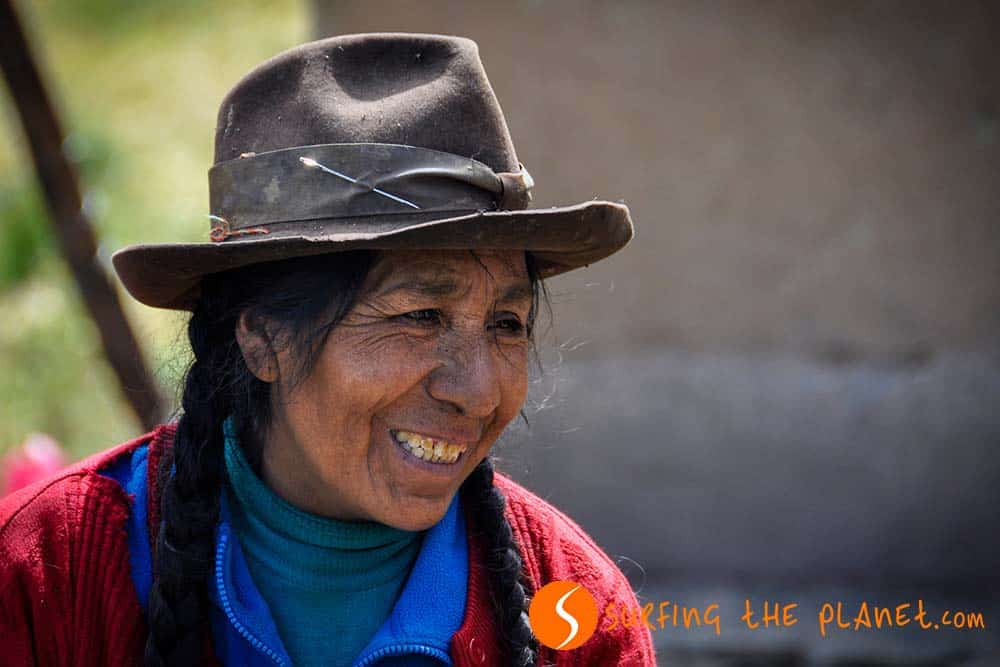 The time we spent in Patacancha, this little Quechua community, was a real heart-warming experience. We enjoyed taking part of their everyday life. The time goes really slow there, they live with very little, and when Alberto told us that once he would like to go to Ollantaytambo, it made us also understand that the world for them ends more or less where the farthest house of the tribe is. Nevertheless, they seemed happy, and made us feel welcome in their life. We hope to go back there one day to see if Alberto, this clever little fellow, becomes the new chief of the tribe and to see if Madaline grows up to be such a beautiful woman as she is now as a little girl…

– ZZZ… BOOK YOUR HOTEL IN PERU – find the best hotel for you.

– BRUM BRUM… RENT A CHEAP CAR FOR YOUR TRIP IN PERU – find the best car for you.