Have you ever dreamt about spending time in sublime beaches without being surrounded by hundreds of other tourists? After traveling in Southeast Asia for almost a year, we can definitely promise you that the Philippines is the country that will fulfill the most easily these dreams of yours. But sure, how could it be not like this in a country that consists of an archipelago of more than 7000 islands and where almost the whole country is a beach? Apart from having first class beaches, hidden corners and fascinating locations for divers, there is one thing that will let you find your own paradise in this country: there are much less tourists in the Philippines than in other beach destinations. The amount of foreigners you find in this country can’t be compared to the mass tourism that you can find when you travel to Thailand, for instance. In addition to travel to the Philippines is also very special because of the people you will meet there. It might be because of the Christian heritage and the fact that their culture is much more similar to the European than in other places in Southeast Asia, but it is so easy to connect with the Filipino who start talking to you in any moment (most of them speak good English) or they just want to take a picture with you.

There are several reasons for that you will meet less tourists. Flying to Manila, the Filipino capital is not as easy and cheap as it is to other major cities in SE Asia. Then, traveling in the Philippines means taking other flights or boats, which make the trip slower, less comfortable, and sometimes even a bit unpredictable. Moreover, there are certain areas in the country which are considered dangerous because of the presence of fundamentalist religious groups.
Therefore, traveling to the Philippines requires good planning. In order to help you with the preparation of your travel to the Philippines, we prepared this brief travel guide for you with lots of useful tips.

How to organize your trip to the Philippines

Looking at the map will immediately make you understand that organizing your travel to the Philippines is not something very easy. It is a country that consists of a lot of islands, which means that you will have to fly or travel by boat quite often. We strongly recommend you not to include too many islands in your trip to the Philippines, since you will easily get frustrated. Try to pick a couple of island groups at most, and focus your trip on those. In addition, flying to Manila is not as cheap as it is to Bangkok or Kuala Lumpur. Nevertheless, if you want to save money you’d rather fly to one of the previously mentioned cities and then take a low-cost flight (AirAsia, CebuAir, etc.) to enter the Philippines. 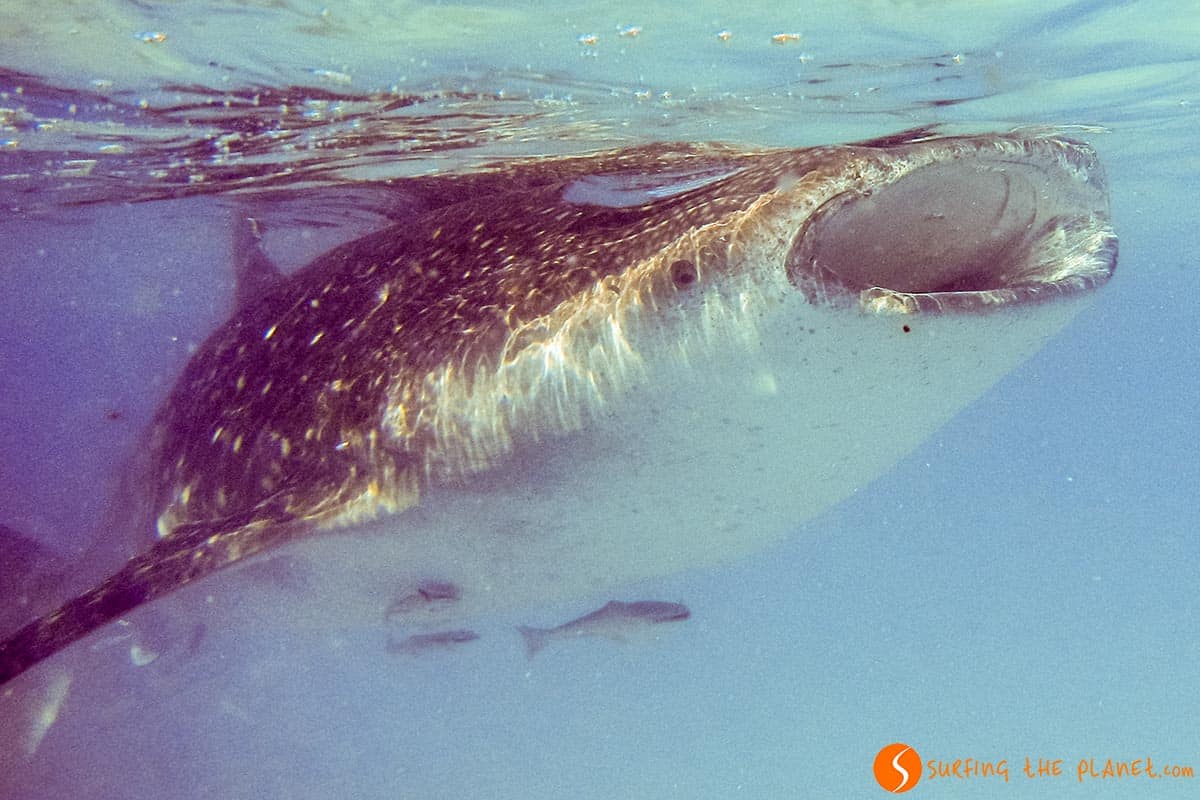 When to travel to the Philippines

The best time to travel to the Philippines is between December and May, which is the dry season, while during the European summer it’s the rainy season in the Philippines. During the wet months it rains almost every day, but you can still enjoy many sunny hours most of the days. Nevertheless, during these months you have to consider that your travel to the Philippines can coincide with one of the typhoons that hit the country every year. These typhoons cause quite a lot of damage usually, and they can ruin your trip, too. The Visayas Islands in the center of the country are the most protected islands from these huge storms.

In the Philippines, just like traveling in the rest of Southeast Asia, it is very important to have a good travel insurance. You can get infected by different tropical diseases, and to have a good insurance is crucial for these cases.

Visa to travel to the Philippines

If your travel to the Philippines will last less then 30 days, you don’t have to bother too much. When you enter the Philippines, your passport will be stamped, which will let you stay one month in the country (not 21 days as it was before). You won’t have to pay any fees for that. If you want to stay more time, you can extend your stay for another month in the offices of immigration. This second month is not free any more, the current fee is 3.130 PHP (around 60 euros). More information on Visa issues. 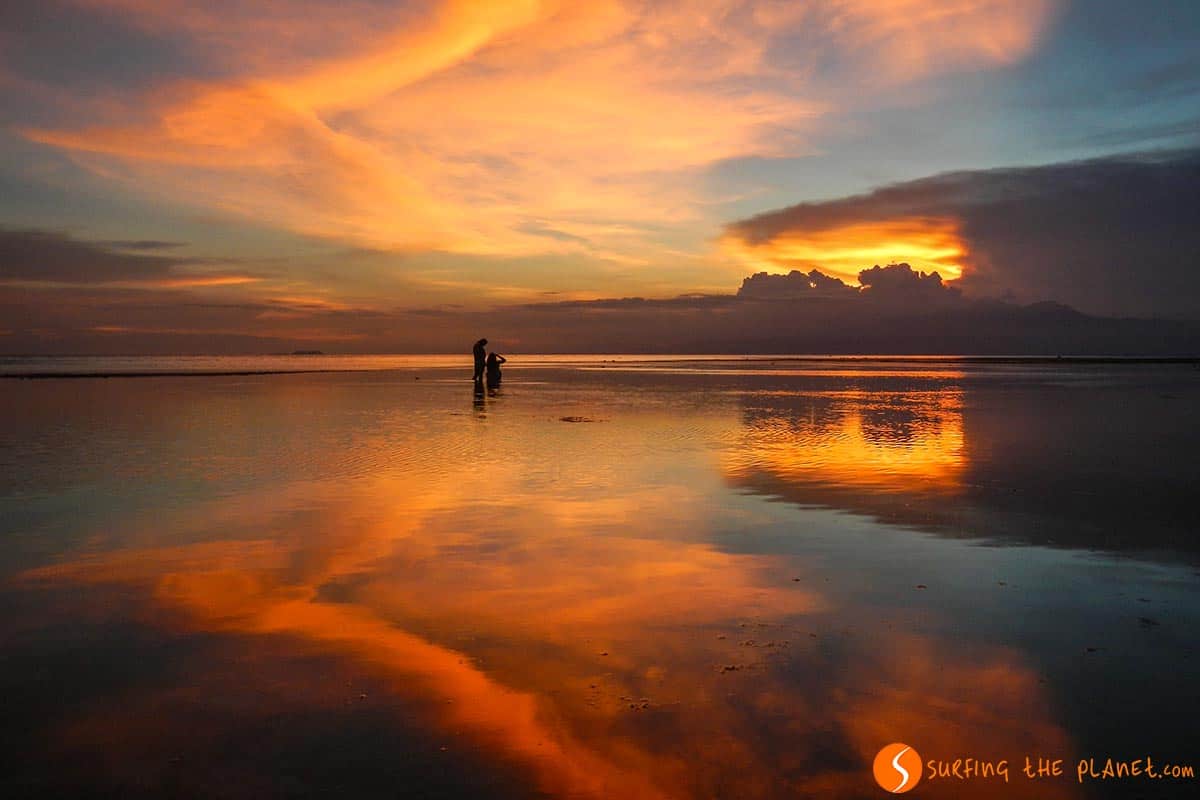 Vaccines and medicine to travel to the Philippines

The only vaccine that you need to have, if you want to travel to the Philippines is the yellow fever, but only if you travel from an endemic area. Other vaccines that are usually recommended are: typhoid fever, diphteria, Japanese encefalitis and hepatitis A/B. As usual, we recommend you to visit a travel clinic in your country, where they will provide you with all the necessary information.

You have to consider that in most parts of the Philippines health care is pretty basic, hence it is quite important to have a complete first aid kit with you. In some areas of the Philippines there is also a possibility of getting infected by malaria, hence we recommend you to get informed on the current situation. Use of a good mosquito repellent is certainly necessary.

The Philippines is found in the UTC + 8 time zone.

In the Philippines the official language is the Filipino (Tagalog), but there are many other languages spoken in the country. English is also a co-official language, hence much more people speak English than in other countries in Southeast Asia. In fact, to travel to Philippines is also a great opportunity to practice your English, if you are not a native English speaker. If you listen to Filipino people talk, you can also recognize many Spanish words, which was quite funny for us to hear.

In the Philippines the local currency is the Philippine peso (PHP). The current exchange rate is 1 euro = 52 PHP, you can always find the update rates on xe.com. In most bigger cities and tourist spots you will find ATM machines to withdraw money. Most local banks charge you 200 PHP as a commission (Citibank does not, but it is not so easy to find ATMs of this bank), so it is better to withdraw larger quantities.

In the Philippines, just as in most part of Southeast Asia, you will find free Wi-Fi in most of the accommodations. Even on islands that seem to be far from everything, you won’t have any problem in finding internet connection. 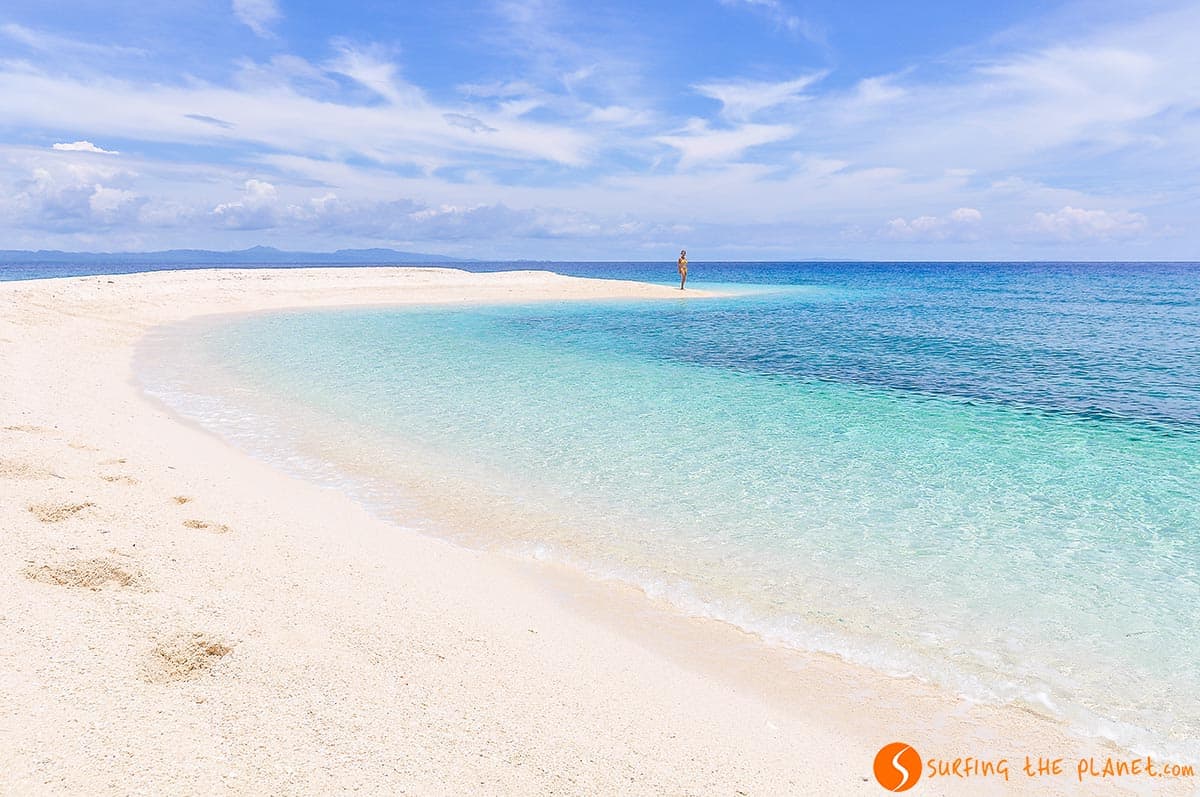 Where to sleep in the Philippines

In the Philippines it is not always very easy to find cheap and nice accommodation. Nevertheless, with some effort, you will always find something decent.

How to get around in the Philippines

Traveling in Southeast Asia, one gets used to traveling in local buses or by minivan most of the time, whereas your travel in the Philippines will include more trips by boat and by plane than on land.  This makes traveling more complicated, which also makes many people stay away from this country.

If you plan to fly, there are several low cost companies you can use for that. With AirAsia and Cebu Pacific you will find great deals most of the time.

Between islands that are close to each other, traveling by boat is the best option, although these boat services can have pretty unpredictable timetable. Sometimes they don’t leave until they have a certain number of passengers, they get canceled because of a breakdown, they don’t let you on board, because there is no more space, etc. When you travel to the Philippines, you need a good amount of patience, too.

Where to eat in the Philippines

Food is not the strongest point of the Philippines. There isn’t a perfect country, so we have to say that food is pretty disappointing in the Philippines, especially compared with the culinary delicacies in the neighboring countries. They eat a lot of bread, burgers and other not very healthy stuff. At least it’s inexpensive, and you will easily find food stalls to buy a sandwich or something similar for very little money. It’s also possible to find local restaurants, where you can try typical Filipino food. The most typical dishes are the filipino spaghuetti (with a sweet tomato sauce and sausage) or the caldereta (a kind of stew that we liked a lot). 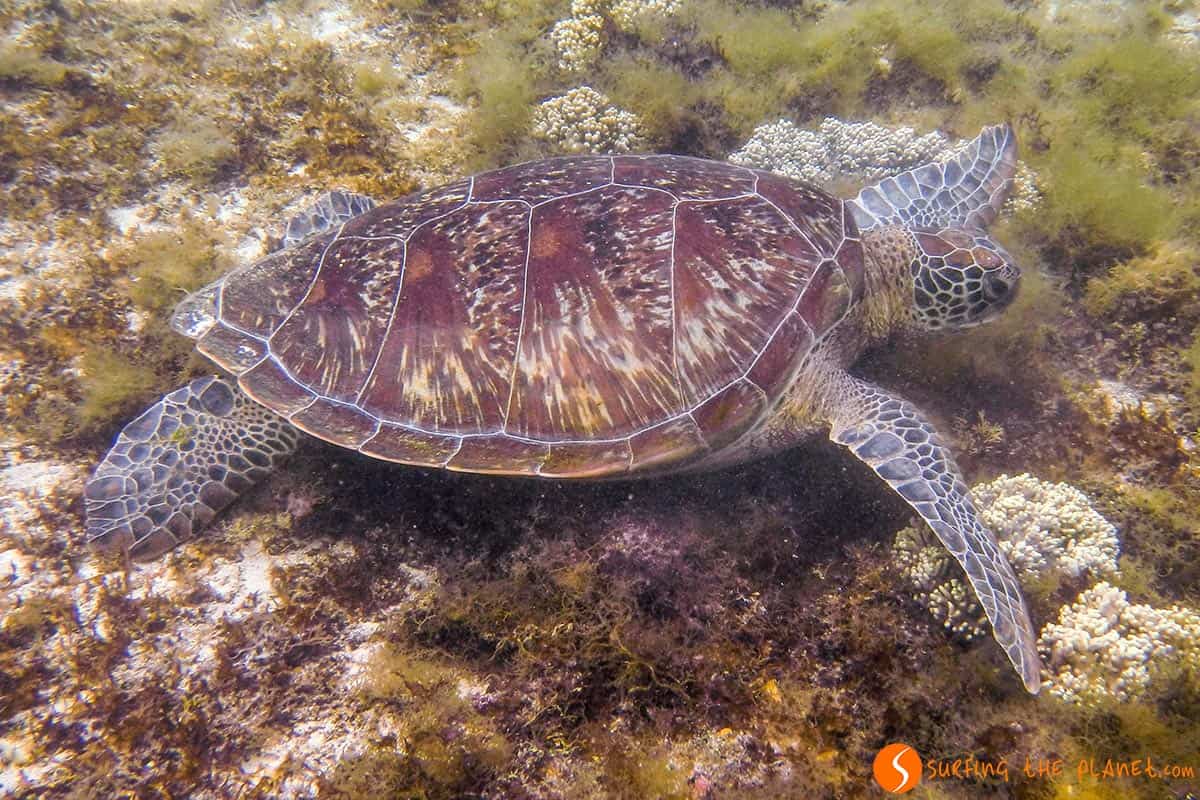 Budget for your travel to the Philippines

We hope that our short guide will be useful to organize your travel to the Philippines.

The major attraction in the Philippines are the beaches and marine life, especially the beaches in Coron and Palawan are breathtaking.  Nevertheless, there are also interesting natural and cultural sights to visit. Amongst them we especially recommend the famous Banaue Rice Terraces and the hanging coffins of Sagada.

– ZZZ… BOOK YOUR HOTEL IN THE PHILIPPINES – find the best hotel for you.

– FLYYY… Find the CHEAPEST FLIGHT TO THE PHILIPPINES.

– BRUM BRUM… RENT A CHEAP CAR FOR YOUR TRIP AROUND THE PHILIPPINES – find the best car for you. 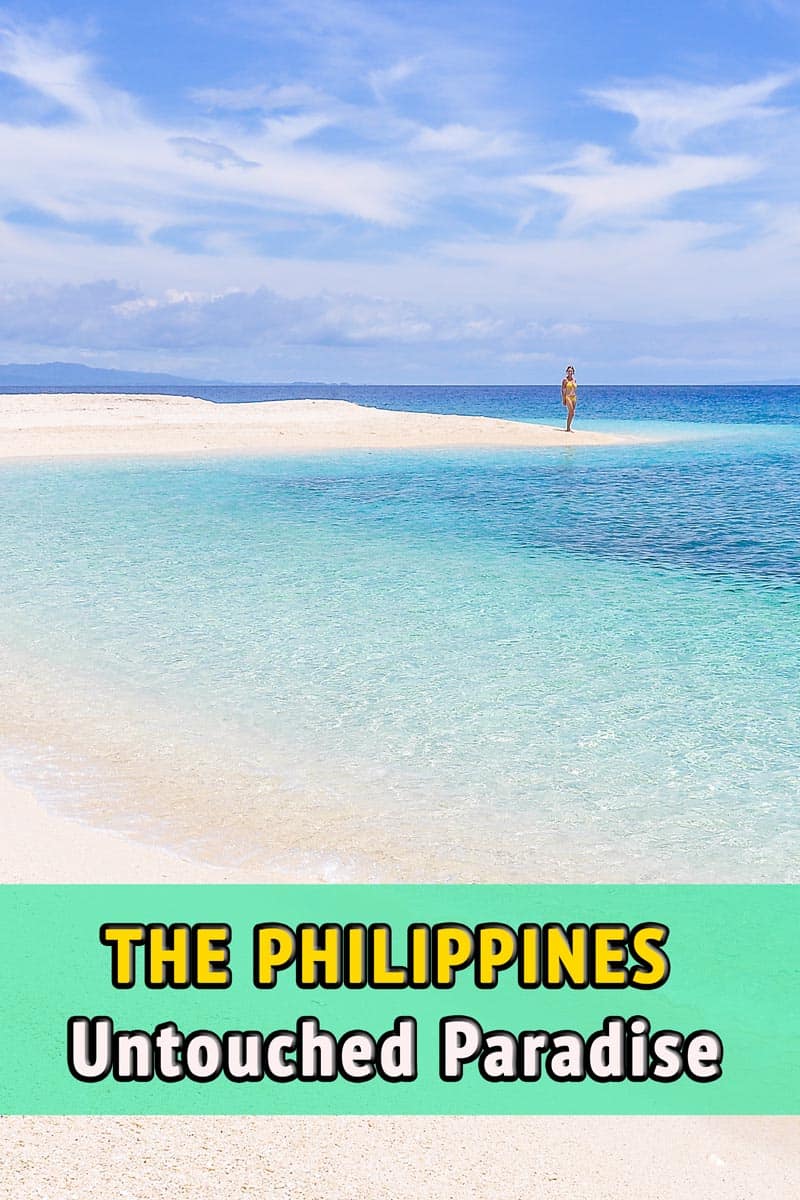 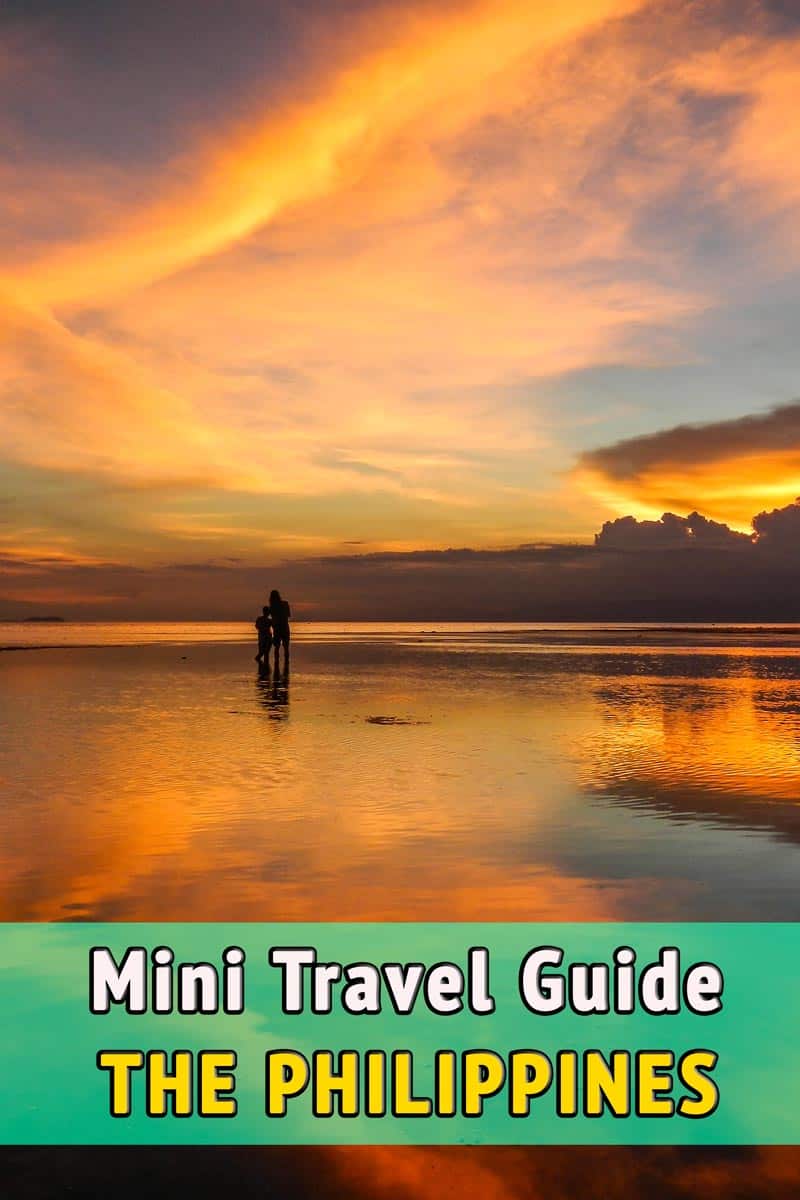