Home » Blog » Viajar a Europa » Viajar a Francia » Visit Collioure, one of the most romantic villages in Southern France

The beautiful coastal village of Collioure is situated in the Côte Vermeille (the vermilion coast) of Southern France only 30 km from the Spanish border. Living in Barcelona, we explored quite well the beautiful beaches and historical villages of the Costa Brava in Catalonia, on the Spanish side of border, and we have always been intrigued by the gems found on the French side of the coast. Finally, we had the chance to visit the beautiful one of the most romantic villages in France, Collioure, which is situated at only a 2 hour drive from Barcelona, a perfect spot for a weekend getaway.

What to see in Collioure? 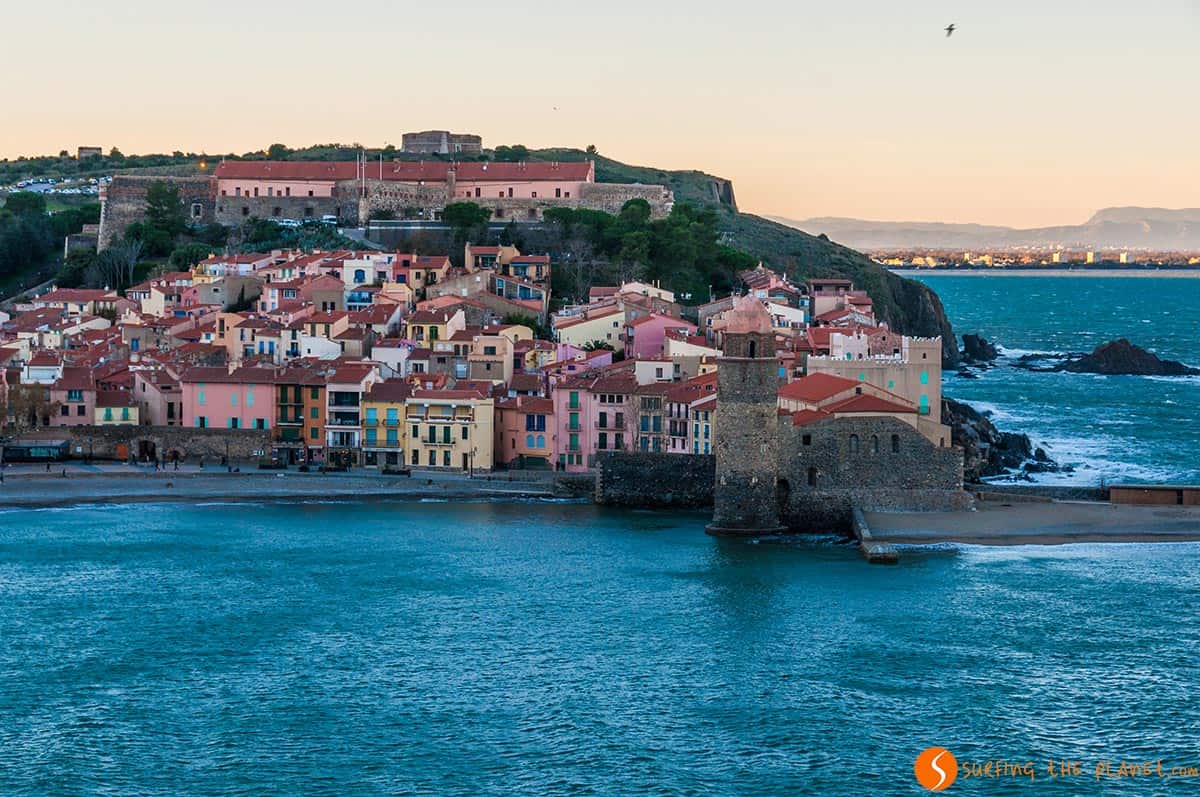 Just like many other places on the coast, Collioure gives you a completely different impression depending on the season you visit it. In summer it’s overcrowded by tourists, which actually makes parking your car difficult even in the vicinity of the village, whereas it’s much calmer outside the summer months. We visited this lovely village in December, which was not adequate of course to enjoy the beaches found here, but we felt compensated by the immense tranquility found there.

The location of the village makes it a picture perfect site, just in front of the sea dominated by the two major sights of the village: Collioure’s beautiful church, the Notre-Dame-des-Anges and a huge fortress called Château Royal de Collioure. The castle took important role in the history of the region and actually several important European royal families were holders of it for some time. 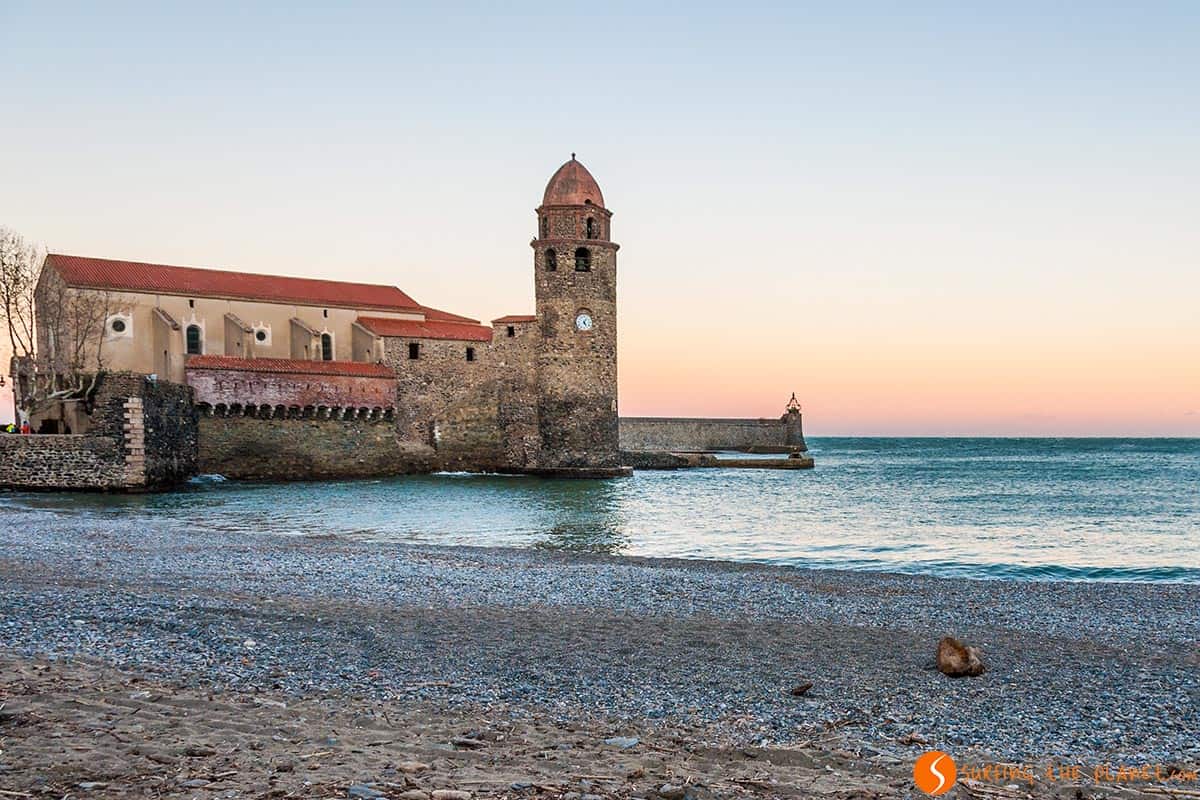 Nevertheless, the best thing to do in Collioure is just to get lost amongst the narrow streets of Moré, the old fishermen’s neighborhood on the seaside. On every corner you will find a picturesque spot with flowers, artistic creativity and restaurants with local Mediterranean cuisine based on anchovies and mussels amongst others. It’s not surprising that this romantic atmosphere inspired many artists, and at the beginning of the 20th century it played the role as an important center for Fauvist painters, like Henri Matisse or Pablo Picasso amongst many others. 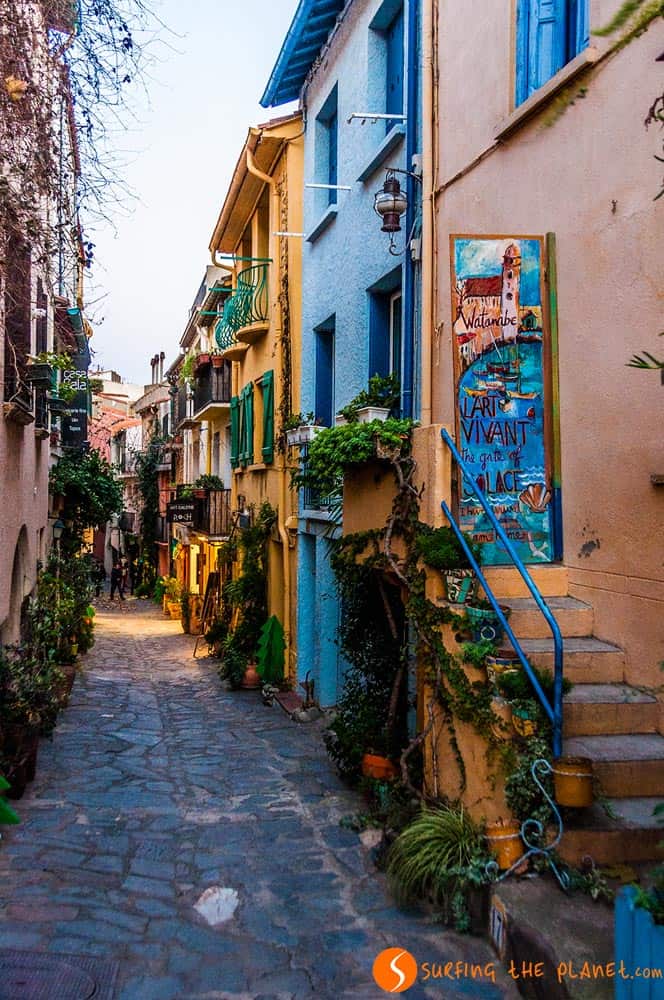 The beach of the village is rocky not sandy, but during the summer months people enjoy taking a bath here. It’s also worth walking to the other side of bay opposite to the historical neighborhood in order to enjoy the stunning views of that, which are especially charming around sunset. To finish our visit in Collioure, we can walk to the small island of Saint Vincent, where we can find a nice little chapel and can enjoy a different perspective of the village. 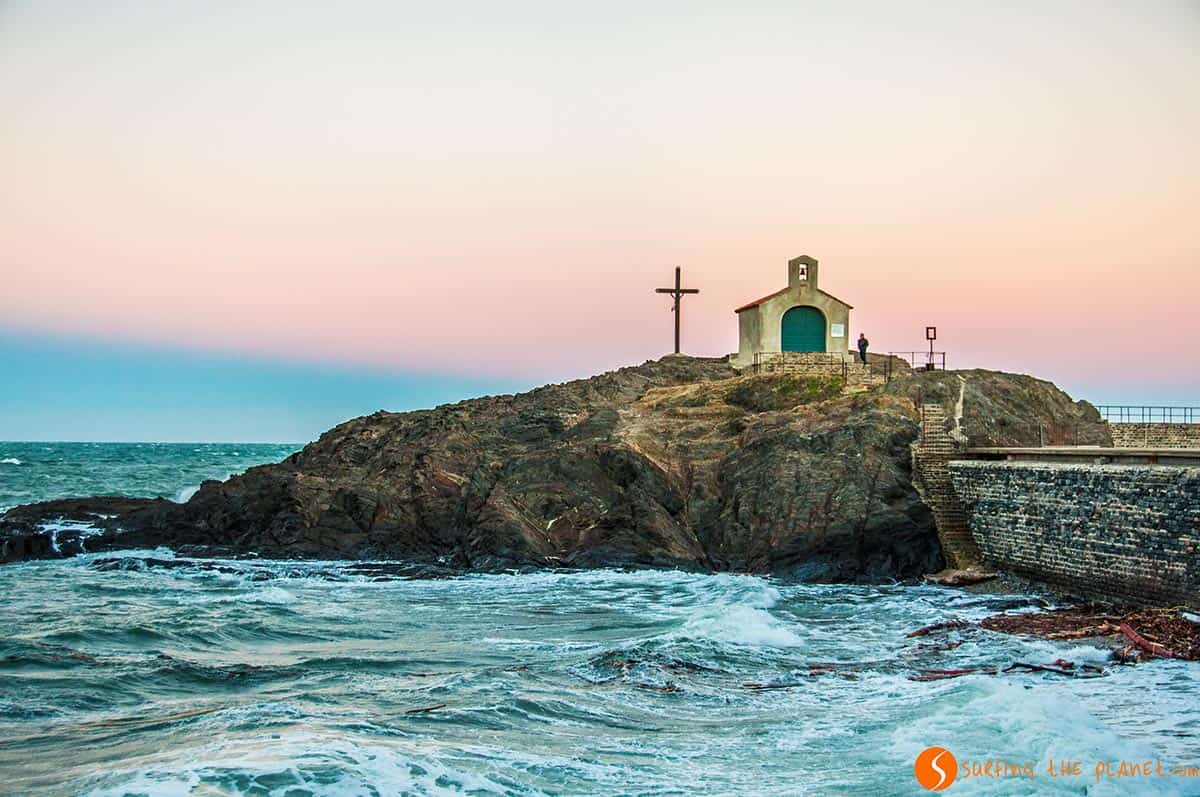 We hope that our post made you feel like visiting the charming seaside village of Collioure, a romantic spot where Spanish and French Catalan cultures meet each other. There are many things to do in Collioure, but it is quite a small village that can be visited in a few hours. If you are in the area for a weekend getaway, we recommend you to visit this beautiful region, especially some of the pretty villages near Perpignan.

The French coastline is full of magical places, here you can find a lot of great tips if you want to travel to the French Riviera.

Collioure is found in the Languedoc-Roussillon Region of Southern France, at only 30 km from the Spanish-French border.

¿LOOKING FOR MORE INFORMATION TO PLAN YOUR TRIP IN SOUTHERN FRANCE? SOME OF THE POSTS YOU SHOULD CHECK OUT:
The most beautiful villages around PERPIGNAN
The most beautiful lavender fields in PROVENCE
14 places you must visit in the PROVENCE

How to get to Collioure

By car: From Barcelona (or other places in Catalonia) you can take the AP-7 highway and after the French border you have to take the first exit called Le Boulou (nr. 43) to Argelès-sur-mer/Port-Vendres, from where it takes less than half an hour to arrive in Collioure.

By public transport: Not very recommended by us for a day trip from Spain, because you can lose a lot of time with connections, but you can get to Perpignan by bus or by train, and then take another bus to Colliure (it takes 3-4 hours minimum from Barcelona).

When to get to Collioure

Collioure can be visited during the whole year, although for a more pleasant experience, we would advise to avoid the summer months, when it can get really overcrowded and parking your car can be a nightmare.

Where to stay in Collioure

There’s a large variety of accommodations in this small village. Nevertheless, the really cheap options are quite scarce. If you want to spend the least, the best you can do is to book an apartment, such as the Résidence Saint Vincent. Amongst the options for medium budget, you can choose either the Hotel Méditerranée and the Hotel des Templiers. If you look for a luxury options in this picturesque village, the best choices are the La Frégate and the Le Relais des Trois Mas.

Book your perfect hotel in Collioure! Find accommodation at the best rate!

We hope that our article convinced you that Collioure is a must see destination on the coast of Southern France.

– ZZZ… BOOK YOUR HOTEL IN COLLIOURE – find the best hotel for you.

– WOW… EXCURSIONS, CHEAP GUIDED TOURS in FRANCE and TICKETS SKIPPING THE LINE – book your tours, excursions and visits and save time skipping the line. 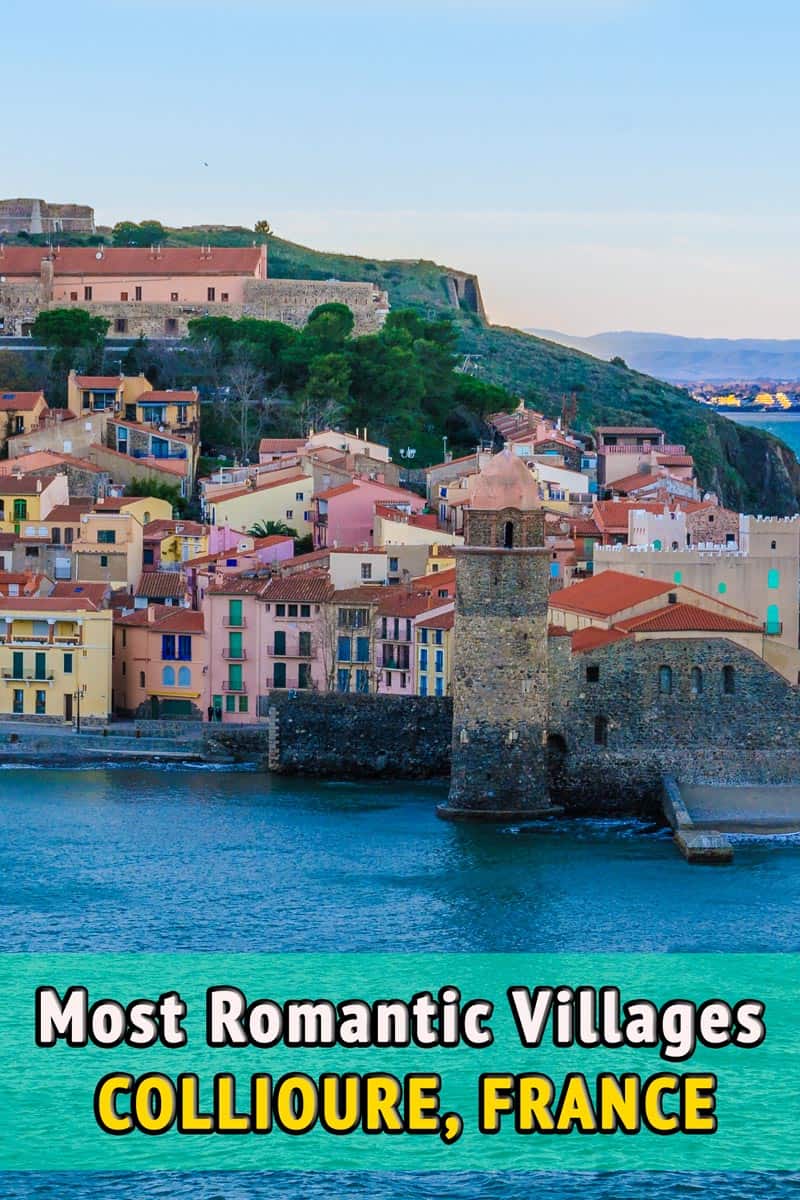 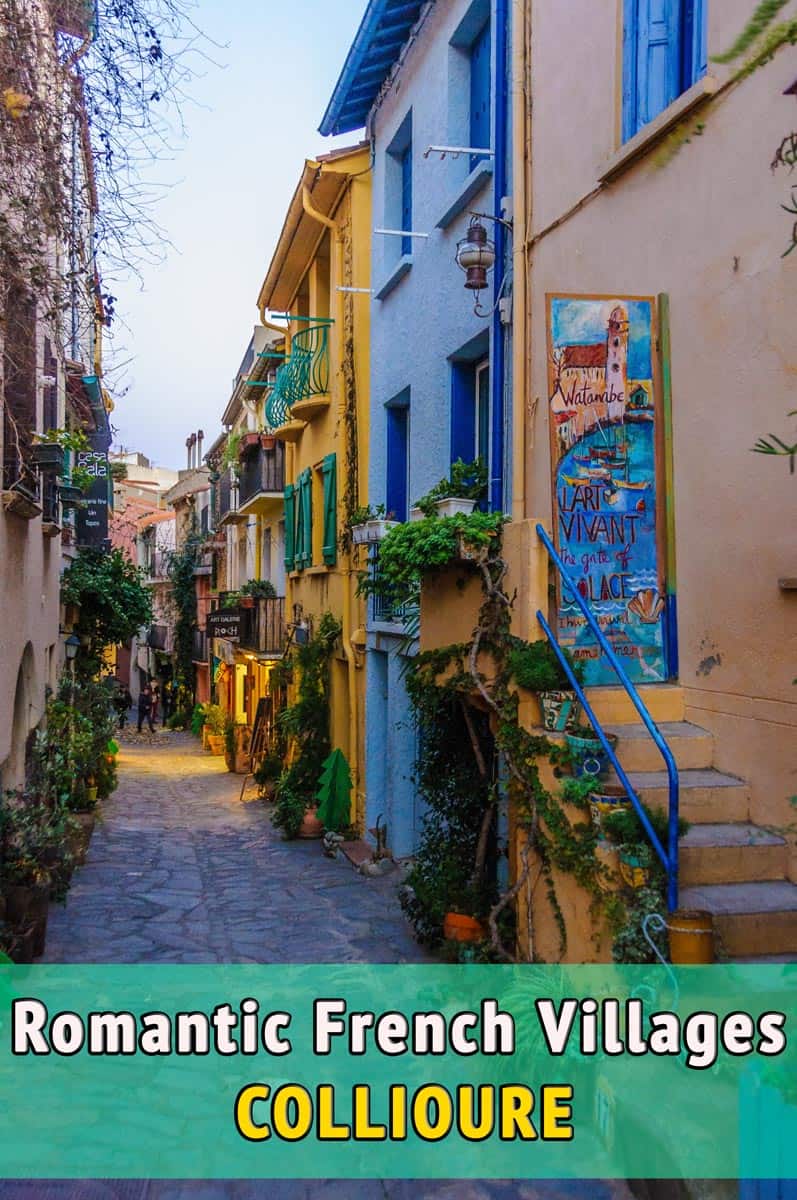