We had been to Valencia several times, but till recently, we haven’t had the occasion to spend enough time there to get to know the city well. We decided last year that we would visit Valencia in March to finally explore this beautiful city. We chose March, because every year during this month (between 15th and 19th) takes place one of the most famous festivals of Spain, the Las Fallas.

We stayed in Valencia for 4 days, and we dedicated our first day to the Fallas Festival, which we already shared with you on our blog. Herein, we would like to recommend you an itinerary to visit Valencia in 3 days.

Let’s start exploring the city together and we will show you the most important things to see in 3 days in Valencia.

Things to see in Valencia in 3 days

Day 1: The Old City of Valencia

A walk in the old city center is very pleasant, and what we enjoyed the most was just walking on the narrow streets and observing the beautiful old buildings everywhere. The sights we can especially recommend to include in your itinerary are the following:

The North Station (Estació de Nord) is the main train station in Valencia, a beautiful modernist building with lot of details in its facade. These details are mostly dedicated to the agricultural activities around Valencia, related to their most famous product, the delicious Valencian orange.

The City Hall, which is an impressive building, presiding the main square of the city. 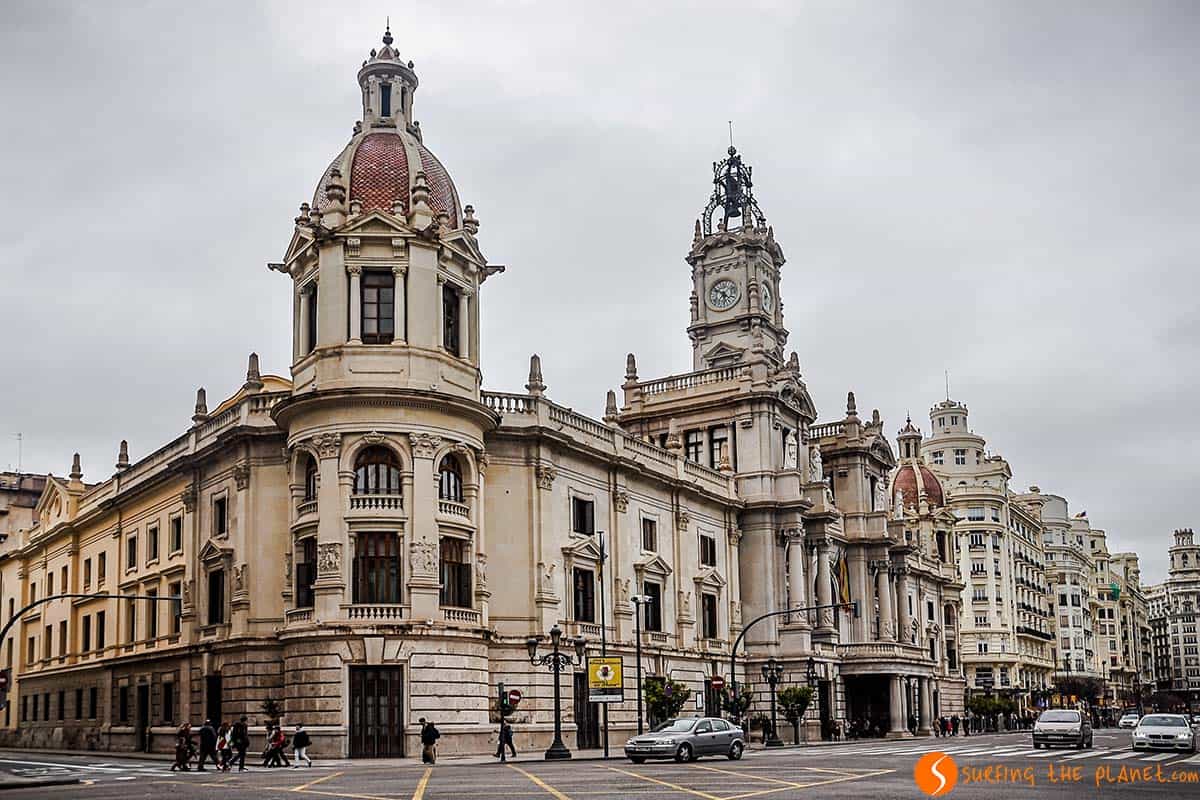 The Central Market of Valencia occupies a beautiful building, and we had a great time just getting lost amongst the stands selling fruit, vegetables and meat. 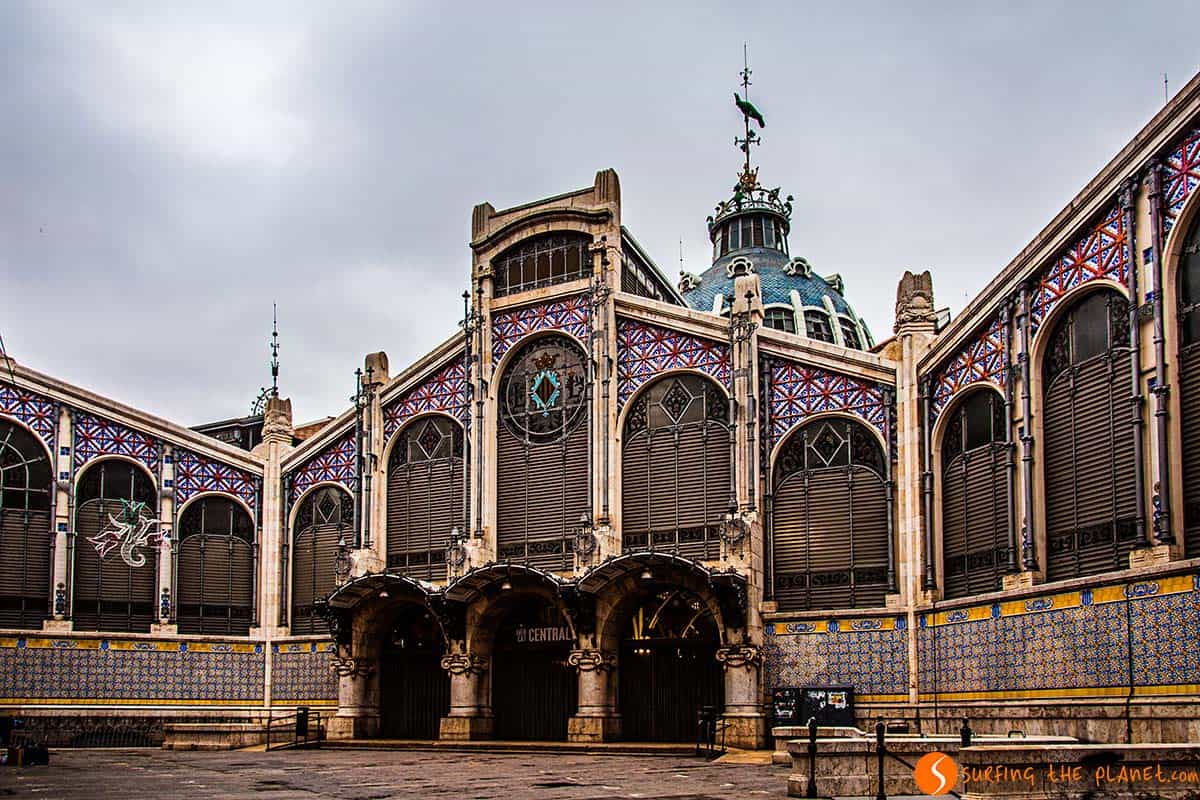 Just next to the market you can find the most spectacular building of the old neighborhood, the Lonja, one of the most impressive examples of Gothic civil architecture. It was built during the golden century, and well represents the commercial prosperity of the city in that era. 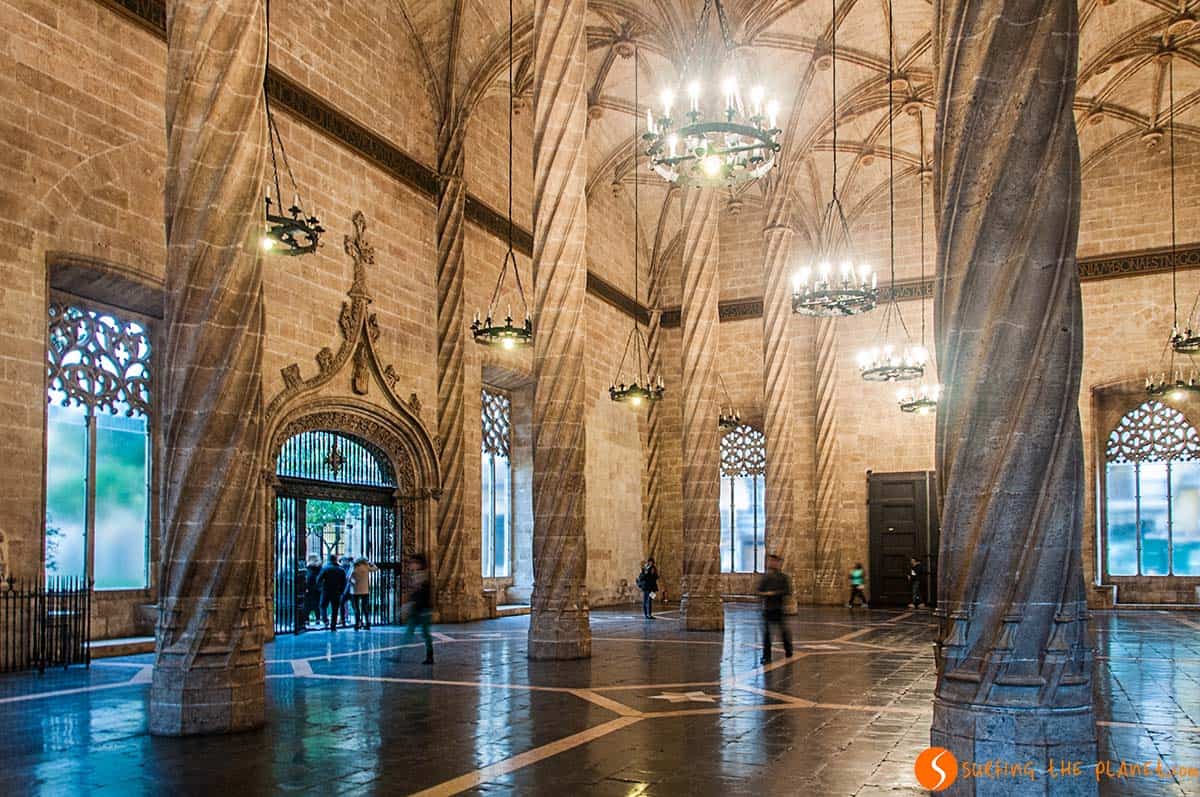 The extraordinary Cathedral in the Plaza de la Virgen square is also a majestic piece of Gothic art.

On the border between the old medieval town and the new town of Valencia stood the medieval wall of the city. Today, only the towers remain from this wall, the Torres de Serrano and Torres de Quart, both of them are impressive and you can enjoy a nice view from the top. 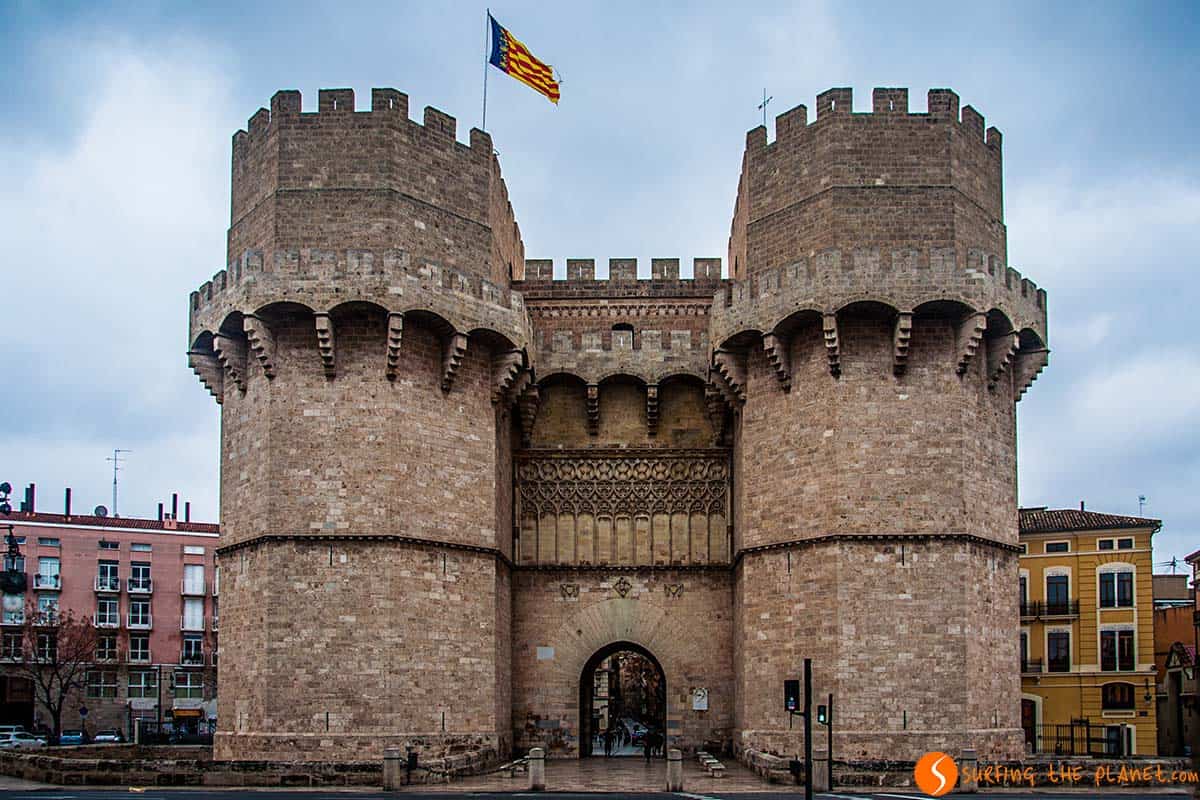 Day 2: The Bioparc and the City of Arts and Sciences

The second day you can dedicate to two special places to visit in Valencia.

The first is the Bioparc, which is a new-generation zoo, quite different from those we had seen before. In the Bioparc, different ecosystems of Africa has been recreated, like the Savannah, Madagascar or the Jungle, and the animals seem to be almost free. Instead of cages there are natural borders, like artificial rivers or lakes that separate the animals from each other. This kind of zoo permits an immersion of the visitors to the natural living space of the animals. It’s especially great for families, since in the zoo they propose loads of special activities, mostly for kids. 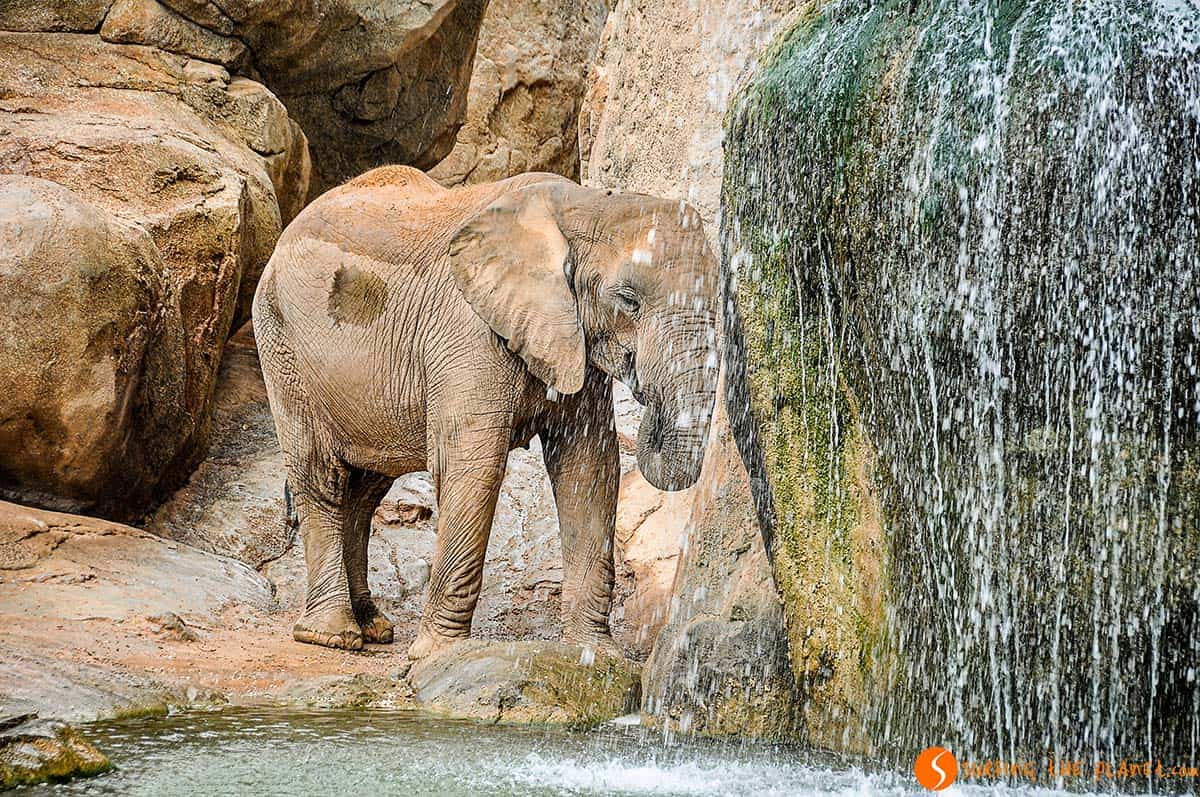 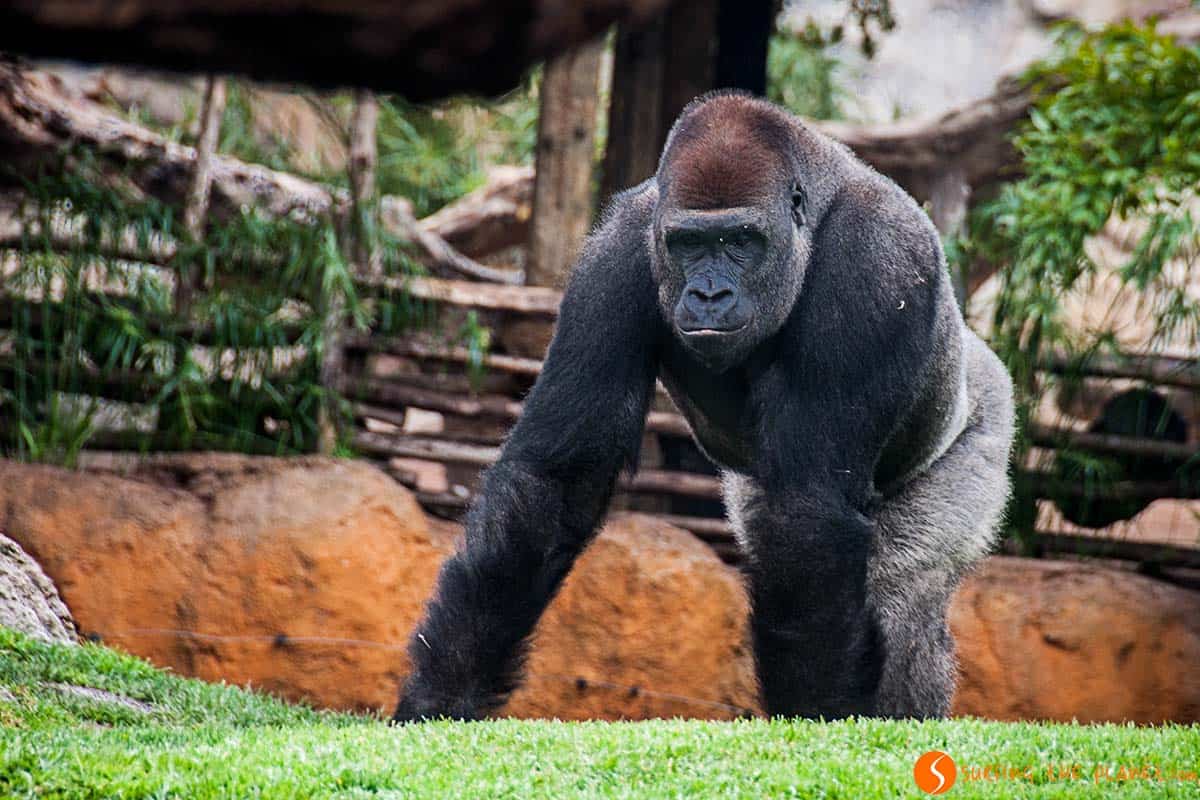 The City of Arts and Sciences is one of the most iconic places to visit in Valencia, in just a few years since its opening at the end of the last century, it has become one of the main symbols of the city. In this modern complex designed by the Spanish architect Calatrava, you can  find the Museum of Sciences, the Palace of Arts, the Planetarium/IMAX (Hemisfèric) and the the biggest aquarium in Europe (Oceanogràfic). You can purchase tickets separately for different parts of the complex or you can also buy combined tickets. 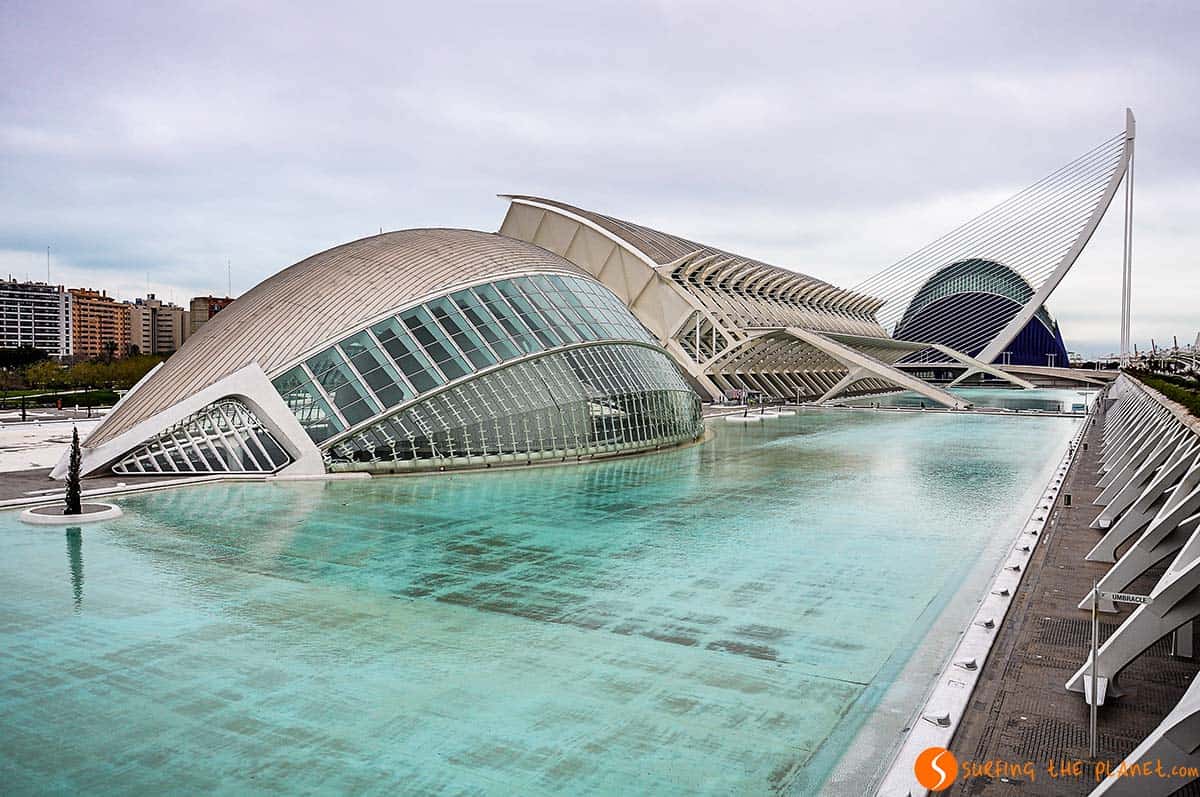 In the Museum of Sciences, you will find an infinite selection of interactive activities to understand different aspects of Science in an entertaining way. In the Hemisfèric you can enjoy fantastic 3D documentaries about Nature or Science, and probably the most impressive part of the museum complex is the Oceanogràfic. Your visit to Valencia can’t be complete without spending a few hours in this fantastic aquarium. It’s like finding yourself in the middle of an underwater documentary. The aquarium is divided into different sections according to the different habitats of marine species, such as the Mediterranean, tropical seas or the Red Sea amongst others.

The most spectacular part is the 35 meter long tunnel, where big sharks basically swim over your head. Just sitting there and observing these enormous sea animals was one of our favorite things to do in Valencia without any doubt! 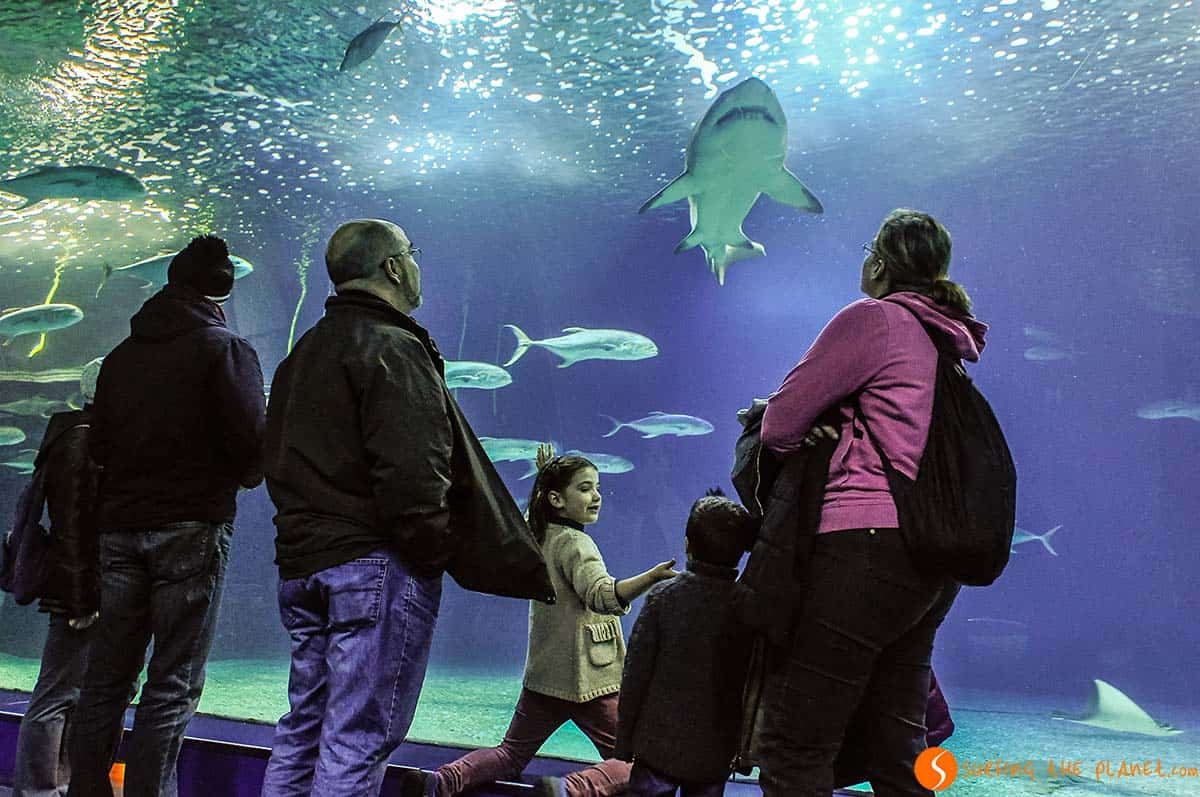 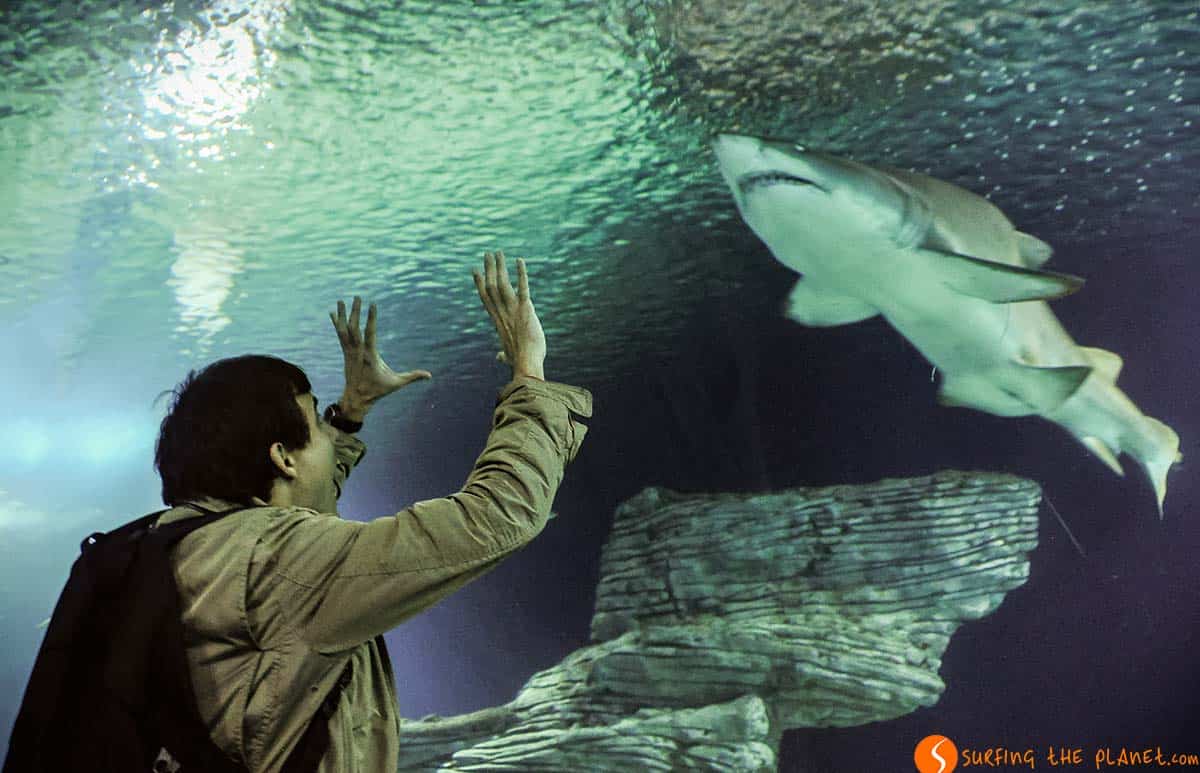 Day 3: The Best Paella in Valencia

The activity that we propose for the third day is related to the dish Valencia is famous about, the PAELLA.

Although it might seem odd that eating a paella in a restaurant can be a full-day activity, but in our next post you will discover that eating a paella in the Barraca de Toni Montoliu is much more than just tasting the famous Valencian rice dish. As a teaser, we will leave you for now with a photo of the paella prepared in this fascinating restaurant, and in our next piece you will find out why eating in Toni Montoliu’s restaurant is a not-to-be-missed thing to do in Valencia. 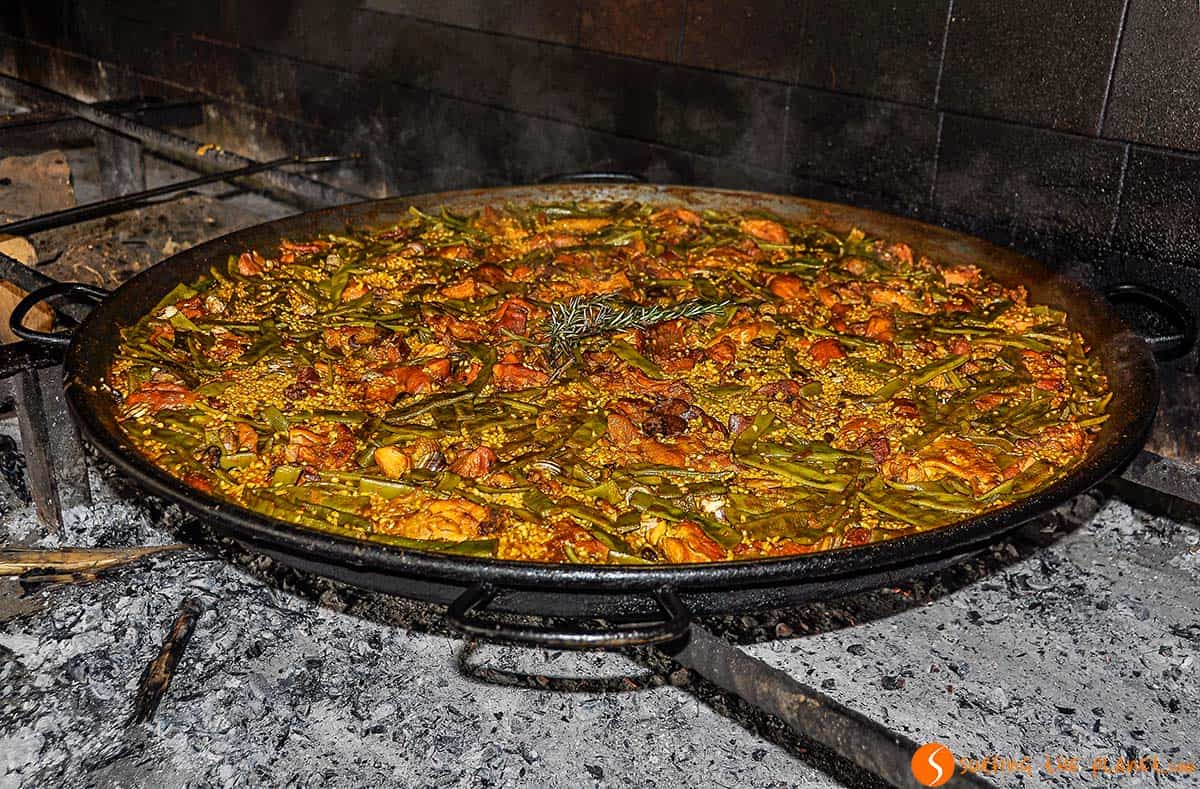 Are you interested in more gastronomy-related experiences in Valencia? You can take one of these guided tours:
Sightseeing & Food Tour in Valencia
Paella cooking class
Food & Wine Tasting Tour

How to get in and get around in Valencia

Valencia has a major international airport and it’s also well connected via fast trains to either Madrid, Barcelona or the main cities in the South. From the airport you can take the metro towards the center, but if you have limited time for Valencia, you can also use this cheap transfer in Valencia.

As far as getting around is concerned, the city center can be walked on foot, but to the City of Arts or the Bioparc, you will need to take the metro or a local bus. You can also rent a motorbike or opt for this convertible ATV tour in which transfer is sorted out.

Where to sleep in Valencia

Valencia has a large selection of hostels and hotels for all budgets. All districts have their own character. The most popular neighborhoods to sleep are the city center, the area around Malvarrosa Beach and the port. Naturally these are the most expensive places to sleep at.

Book your fabulous hotel in Valencia! Find accommodation at the best rate!

If you already visited the city itself, Valencia is also a great base for doing some day trips. If you want to save time and you look for organized guided tours, here are some of the most intriguing ones you can choose:
Tour and boat trip in the beautiful Albufeira
Excursion to Chulilla
Day trip to Xativa and Charcos de Quesa
Excursion to the caves around Valencia
We have discovered the secrets of Valencia with the help of Visit Valencia, who will generously facilitate you information and will help you with the organization of your stay in Valencia. With 3 days in Valencia and this itinerary you would have a real taste of this beautiful city and you already know where to eat the best Paella !

– ZZZ… BOOK YOUR HOTEL IN VALENCIA – find the best hotel for you.

– BRUM BRUM… RENT A CHEAP CAR FOR YOUR TRIP TO VALENCIA – find the best car for you. 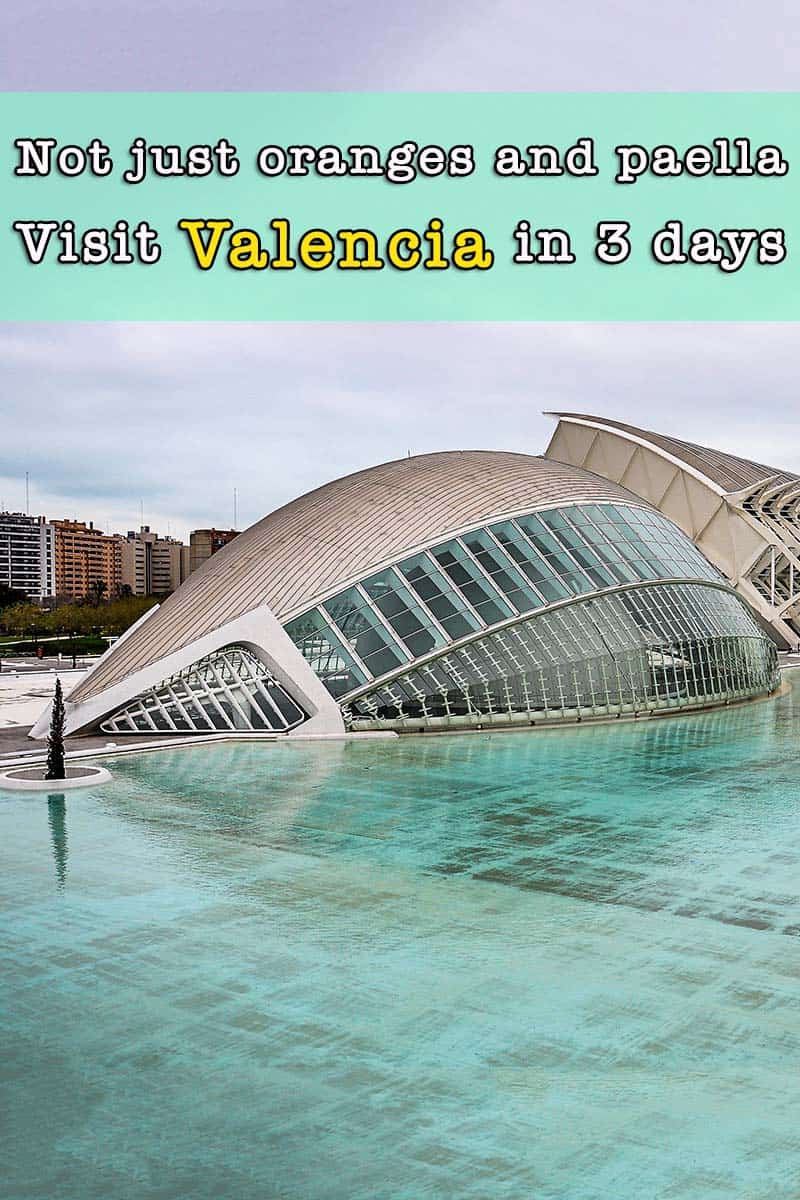 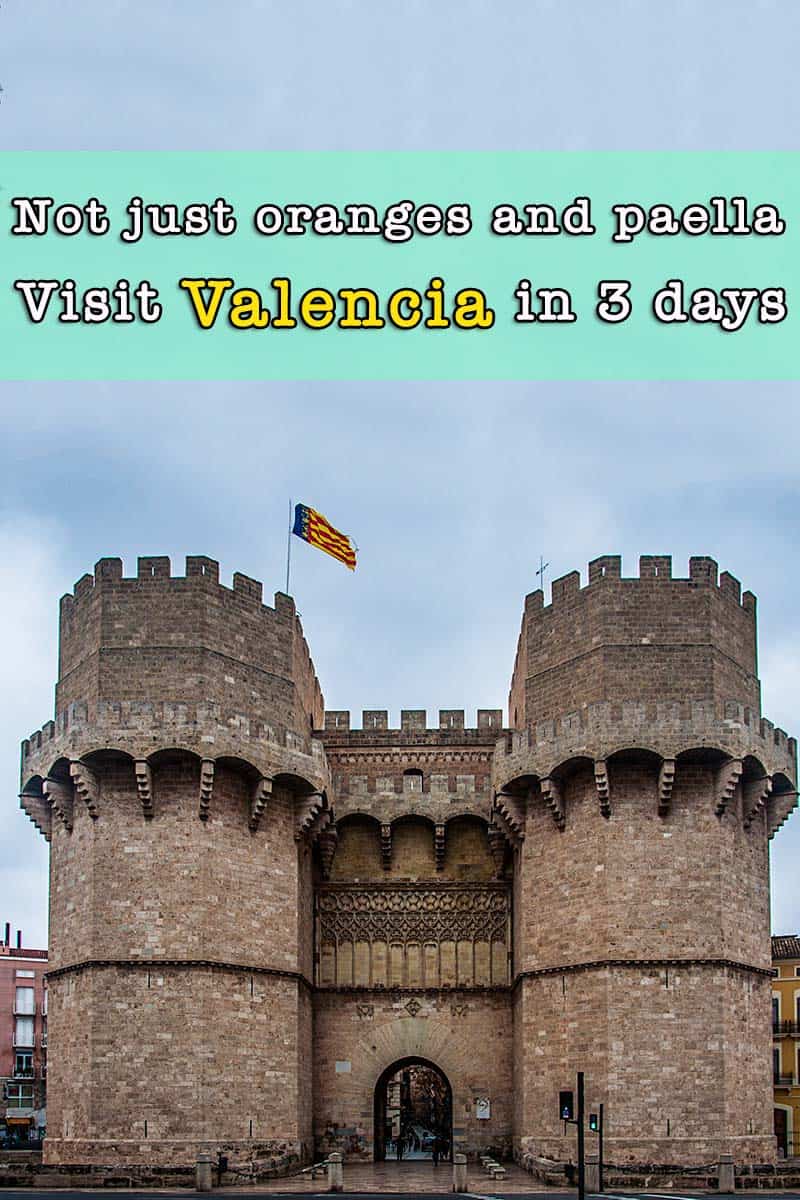