Every year, when the month of June comes,  you can start hearing the noise of firecrackers in the streets of Catalonia. This will immediately remind you that the night of Sant Joan is approaching. The night of Sant Joan or the night of Fires is celebrated in Catalonia the night between June 23rd-24th, the shortest night of the year. There are some differences between different parts of the country, but fire is the main element of the celebrations. They light bonfires in the different communities and traditionally they burnt all the wooden objects they accumulated during the whole year. Depending on the zone they light one or several bonfires. There are several interpretations of the reason why they light these fires, the one we like the most is that these fires clean the sky from evil spirits for the whole following year. 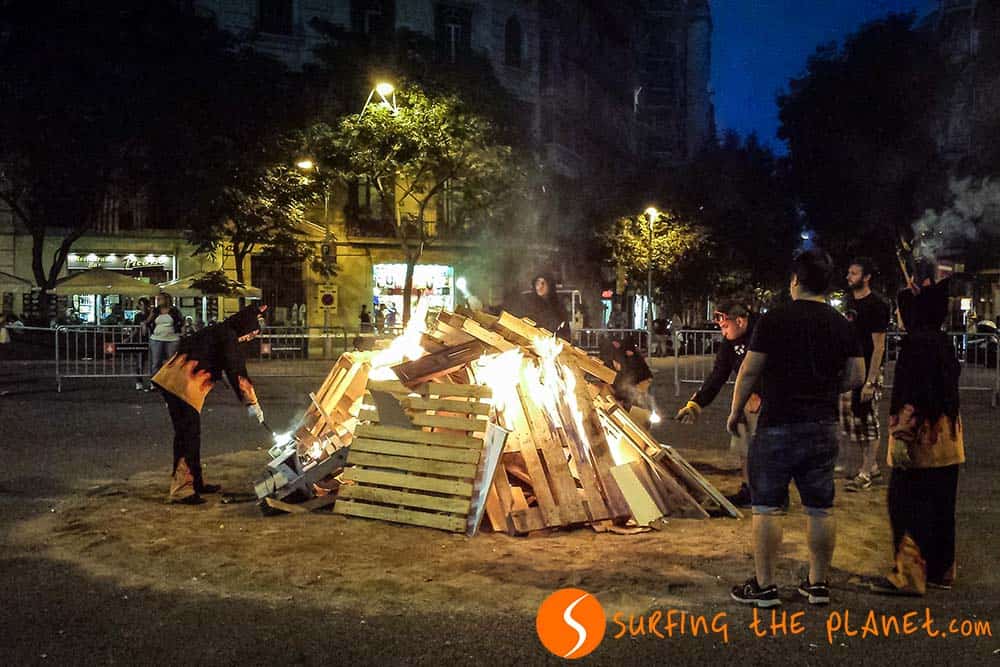 During Franco’s dictatorship, this tradition was forbidden by the regime, since it was considered to be a Pagan festivity. Hence, many people celebrated this day in secret. Although bonfires are the most important part of the celebrations, there is no Sant Joan without exploding loads of firecrackers. The noise becomes more and more intense during the day and at night the sky in Barcelona becomes covered by smoke coming from both firecrackers and bonfires. There is not a second of silence until the morning when the last party people finally go to bed.

For the celebrations, people meet at home, in the street or on the beach, and spend the night around a bonfire. In many neighborhoods they close whole streets where locals put tables and the residents have their dinner there. 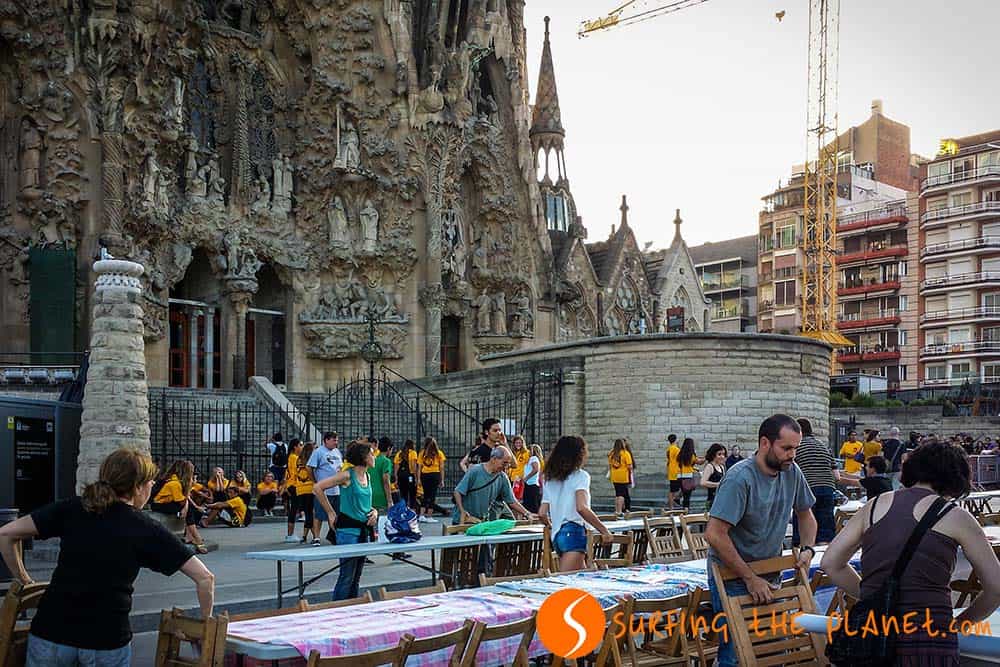 This year, we celebrated this day in a very special place, our table was just in front of the entrance of the Sagrada Familia Church, and while we were eating our dinner, the marvelous Nativity Façade was at the background. The majestic church stands there as a guardian of everything that happens in the neighborhood during the night. 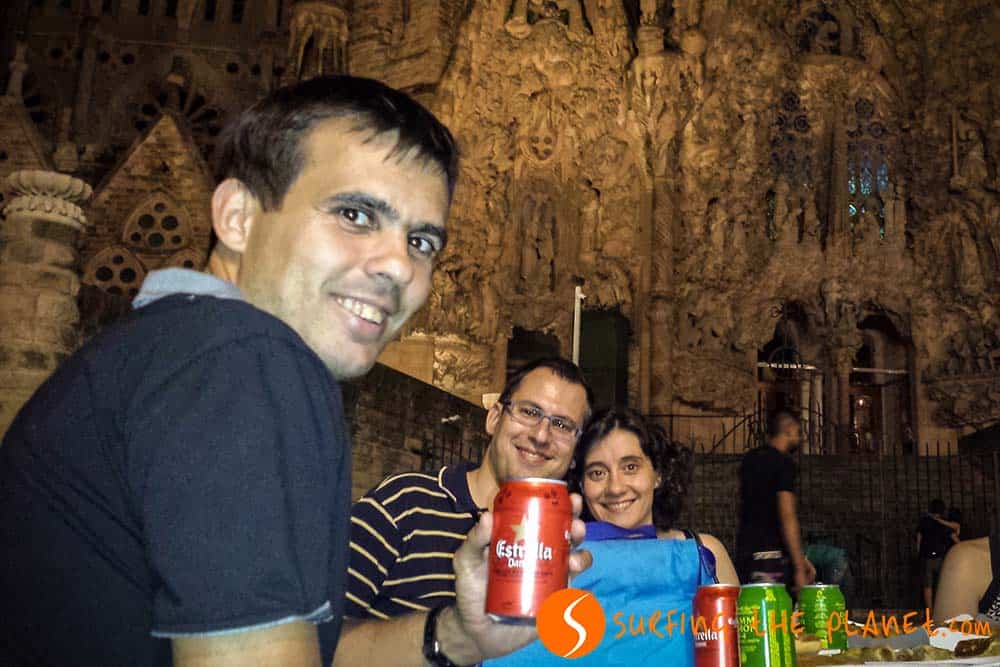 Around 9 PM, a percussion group opens the ceremony when they light a torch that later serves for lighting the bonfire. 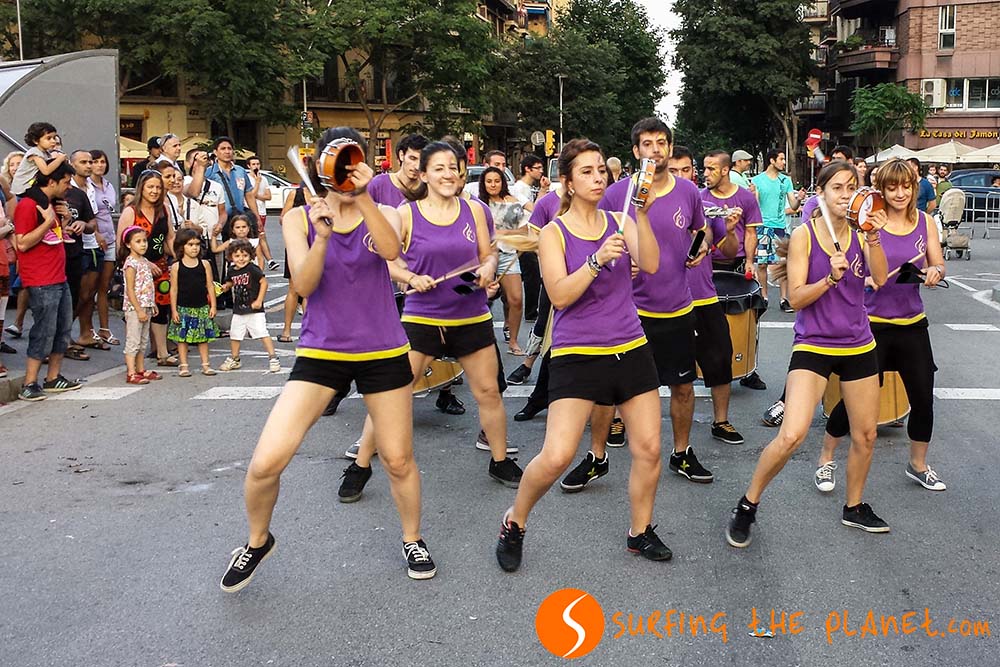 At 10 PM, the key moment of the night arrives, when the bonfire is lit under the sound of percussionists and fireworks. 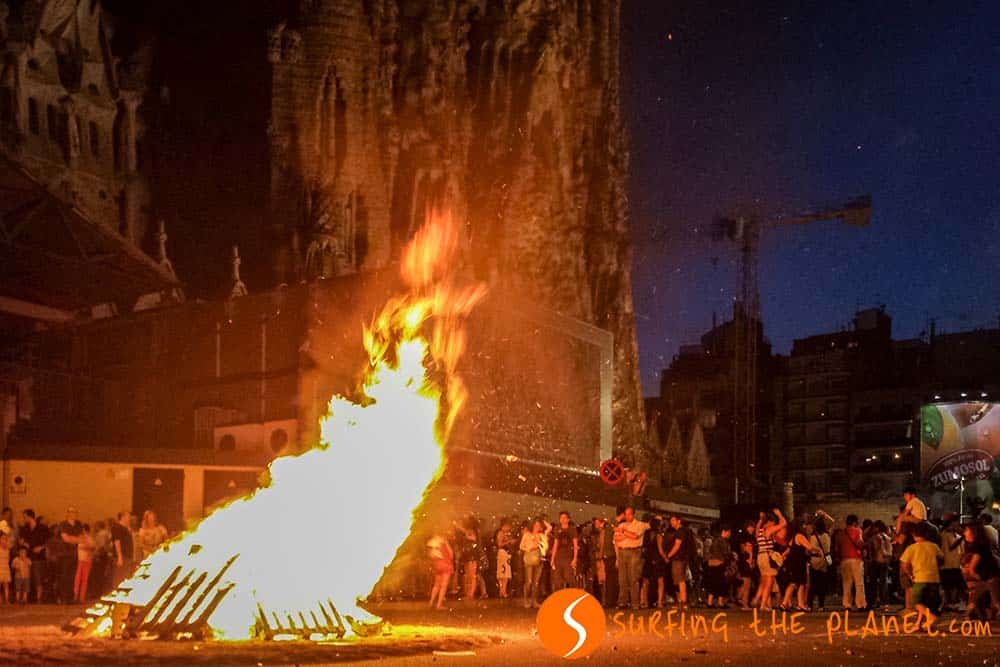 The typical food of Sant Joan is the “coca”, a pastry that can be salty or sweet. In our table, we had all types of sweet “cocas”: one with fruits, another with cream and one that was the typical food of the poor people, which they prepare with lard. They were all really tasty! Sorry guys, but we have photos only of the fruity one, the others we ate before the camera had the chance to capture them. 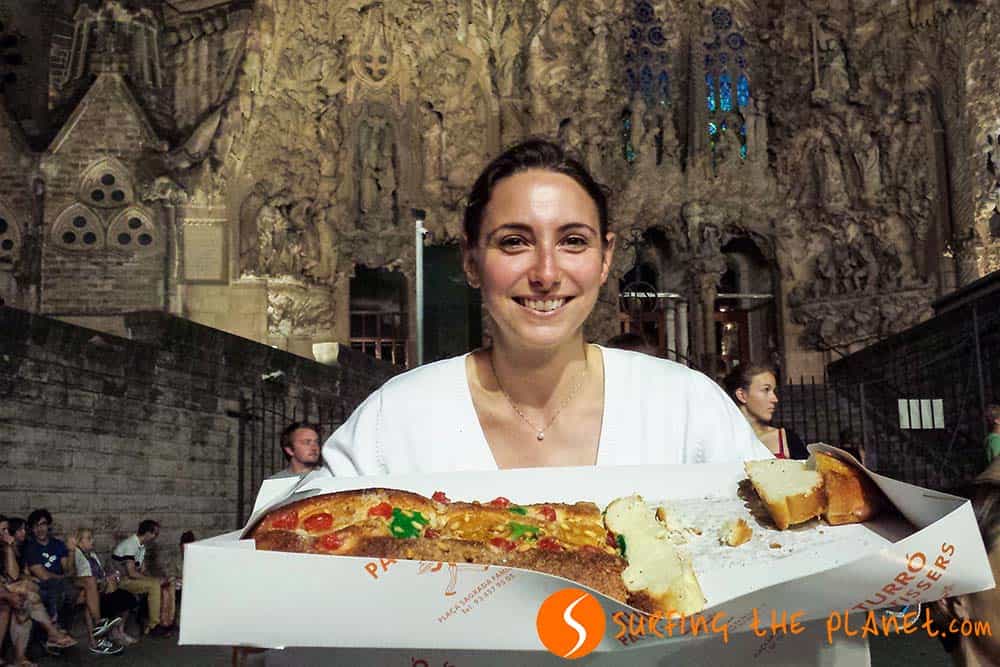 It is a night when bonfires, firecrackers, percussion music and other concerts accompany the night, that’s how the day of Sant Joan is celebrated in Barcelona. This is an event that at least once in a lifetime you should see in Barcelona.
How do you celebrate the shortest night of the year in your hometown or in any place special to you?

Barcelona has a lot of other great festivities, check out here some of the coolest music festivals in Barcelona and other parts of Spain.