Travel to Tanzania is something most people have dreamt about, and when you get to chance to do that, it will become something recorded in you mind forever. Exploring and seeing the Africa you had seen only in nature documentaries, experiencing the romantic Africa from the book Out of Africa or the Africa full of adventures from the book Explorers of the Nile, it’s a real dream come true for all.

Tanzania is a country, whose major income comes from tourism, and a lot of effort is dedicated in the country to keep tourists going there. The national parks are maintained very well, and most of the agencies offer responsible tours, in which they commit themselves to conserving these natural beauties intact.

When in the Ngorongoro Crater, the Serengeti National Park or the Tarangire National Park, you get to see from a few meters distance these majestic wild animals in their natural environment, you will be totally overwhelmed. You will see that these animals live their life independently of your presence, as if you weren’t there at all. This will make you feel that you don’t have any power in your hand, you are only a mere spectator in their home, and you have to adapt to their rules.

How to organize your travel to Tanzania

Tanzania is a pretty safe country and to travel around Tanzania is quite easy. There are several ways you can visit the natural parks:

You can rent a 4WD vehicle and explore the parks on your own. We don’t really recommend you this option, because this way you will not see as many animals as you would love to. All these parques are huge (the Serengeti especially) and animals can be found in certain areas depending on the season.

The option we recommend is to contract a tour through an agency, and hence you will have much better chances of seeing a lot of wildlife during your travel to Tanzania. The guides who work in these agencies have spent many years doing this work, therefore, they perfectly know how the animals move around, and where you have bigger chance to spot wildlife.

There are a lot of travel agencies that organize this kind of safaris. You can book them from home or you can do that when you arrive in Arusha, which is the closest city to the national parks of Northern Tanzania. There are many agencies there, so you won’t have any problem with booking a safari with one of them on arrival. However, we suggest you should organize it from your home, hence you will have more time to think through different options. Moreover, most agencies offer to pick you up in one of the closest airports (Nairobi in Kenia included), which makes the arrival much more pleasant. Many travel agencies also offer guides who speak not only English, but Spanish or Italian for instance, you just have to find them. The best way to decide which agency to pick for your safari in Tanzania is reading opinions from other travelers, and if someone who already did a safari can recommend you one, it’s even better. We haven’t heard about people having some really bad experience with these agencies, but we saw that some of them respect less the natural parks and animals. We saw ourselves that certain guides simply didn’t warn tourists traveling with them not to take selfies or they didn’t make them stop doing too much noise. These agencies should be avoided in our opinion. 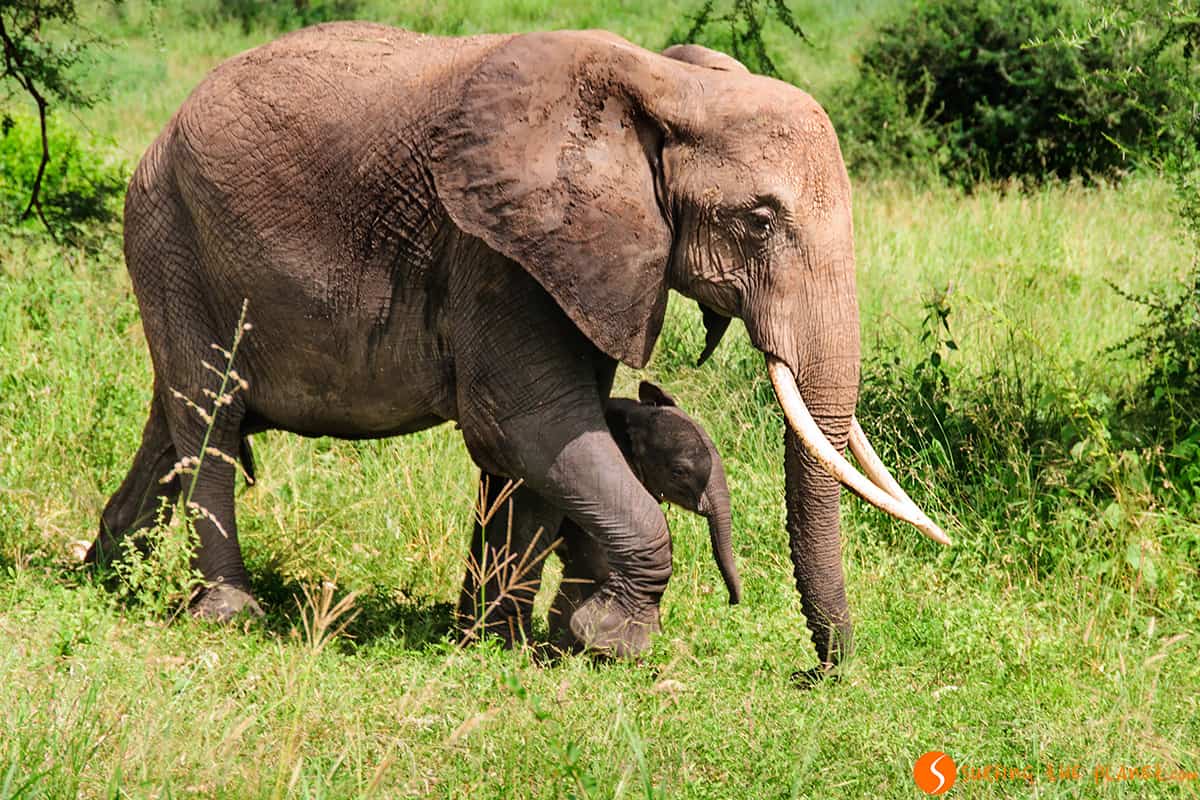 When to travel to Tanzania

In Tanzania, temperatures are elevated during the whole year, and anytime you travel to Tanzania, you will be able to enjoy a great safari. Nevertheless, between March and May is the rainy season, when it rains quite a lot and certain roads in the natural parks become less accessible. In addition, during these months there’s much more vegetation, which provides more hiding space for the animals, making them less easily visible. You also have to consider that in the wet season there is much more water in the park, and animals aren’t concentrated around certain spots as they do in the dry season, hence it’s more difficult to spot them in theory. We have to tell you that we traveled at the end of May, and since the rainy season basically finished, it didn’t rain at all, and we saw loads of animals. The biggest advantage of traveling in low season as we did, is that you can enjoy the parks with much less people around.

There are two high seasons in Tanzania, the first is between December and February when the great animal migration takes place in the Serengeti, and in July-August, which is the holiday season in Europe.

In all Africa there is risk to get infected by malaria, and you’d rather take medicine to prevent that. We took Malarone for that purpose.
The following vaccines are also recommended when you travel to Tanzania: yellow fever, hepatitis A&B, tethanus-difteria and typhoid fever. Nevertheless, just as for other countries, we suggest you ask for information in the travel clinic in your country, where they will provide you with all the necessary information.

It’s important to have a good travel insurance. You can never know what might happen, and it’s better to be prepared. 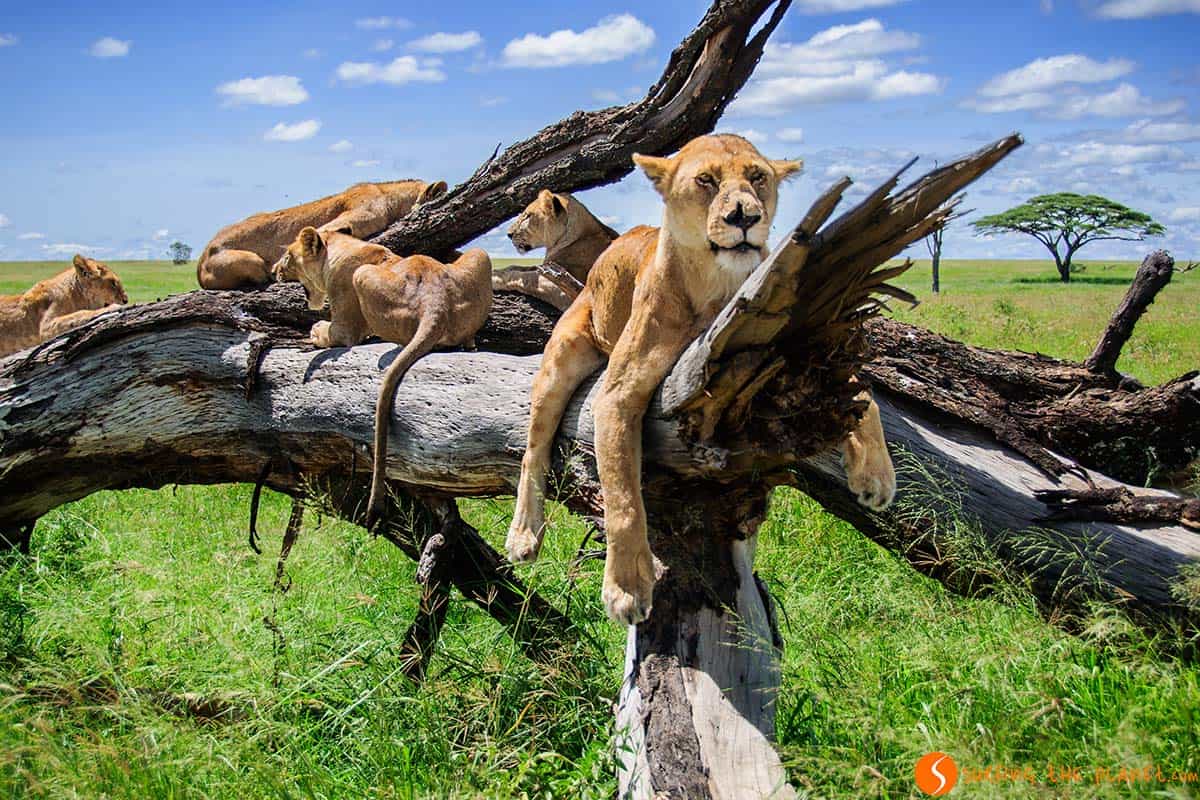 The citizens of most countries need Visa to enter Tanzania, however, it’s possible to get your single-entry Visa on arrival at the airport. The visa allows you stay in the country for 90 days. You just have to fill in the immigration form and your passport will be stamped at the airport. European citizens pay 50 USD for the tourist visa, while American citizens pay the double.

How much does it cost to travel to Tanzania

Travel to Tanzania is not exactly cheap. A safari in Tanzania is more expensive than in the neighboring Kenia for instance, and the main reason is that the entrance fees to the different national parks are really expensive. The only way to do a safari on a budget is if you take the cheapest option for accommodation, which is sleeping in a tent.

Tanzania is found in the UTC + 3 time zone.

The official language in Tanzania is the Swahili, however in touristic areas many people speak English. There are many agencies that can provide you with guides that also speak other languages, like Spanish, French or Italian, etc.

The local currency in Tanzania is the Tanzanian shilling. However, most of the agencies will ask for the payment in USD. They are quite specific about the kind of notes they accept (usually not older than 2009), be careful when changing your money back home.
The current rate is 1 euro = 2.3 TZS. On xe.com you can find the up-to-date exchange rate. 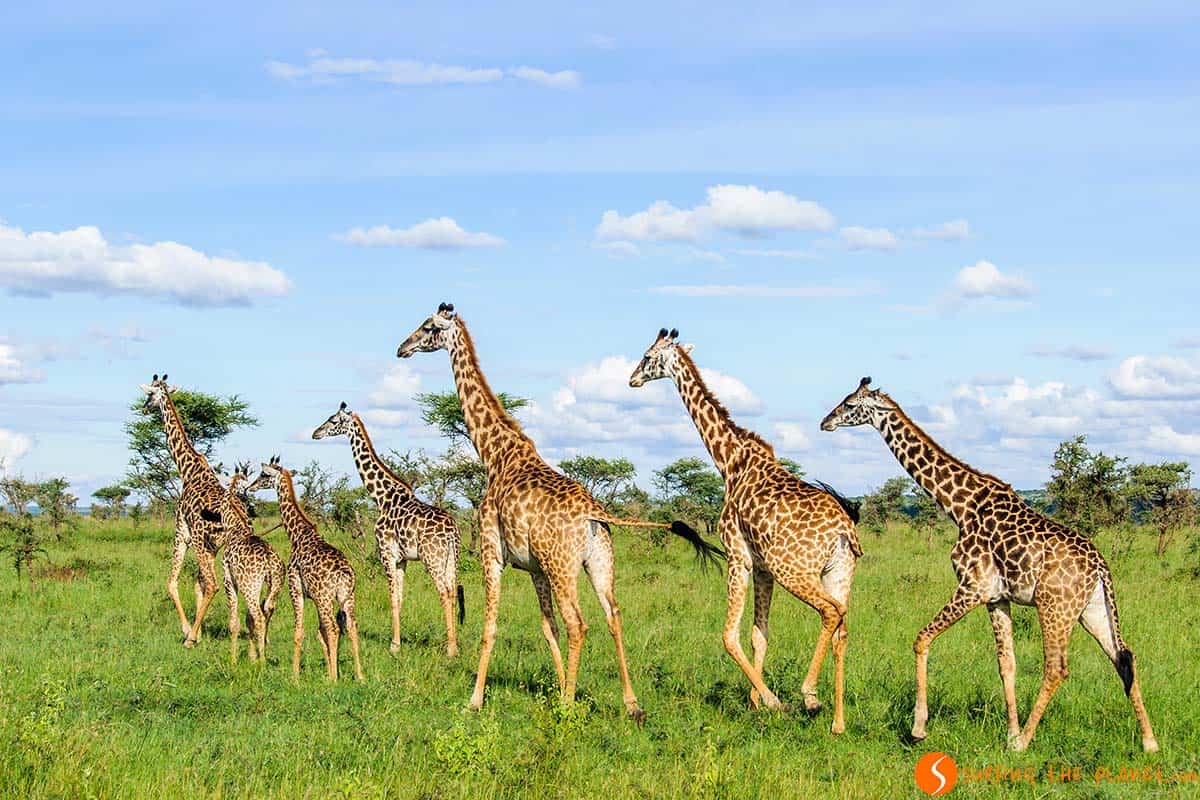 In hotels you will find Wifi, although sometimes it only works near the reception. Most agencies are already working on equipping their jeeps with Wifi, hence you will soon have internet connection during the safaris, too.

Tanzania seems a pretty safe country, we never felt uncomfortable there. It’s also true that we didn’t spend too much time without the staff of the agency.

Where to sleep  Tanzania

Normally when you book a safari, the first and the last night you will spend in a hotel, and for the rest of the nights during your travel to Tanzania there are basically 3 different options::

How to move around Tanzania

If you book your tour in an agency, they organize everything for you. You will travel all the time in a 4WD jeep with a guide, a driver (these 2 can be the same), and a cook.

Where to eat in Tanzania

In the safaris the food is included in the price, although you always have the option to bring your own food if you want. We think that you won’t save a lot of money by doing that, and cooks usually prepare quite delicious meals, which lets you taste the local cuisine.

What to see and do in Tanzania

In the Tanzania category, you will find everything we did in Tanzania.

If you want to get more inspiration, check out these nice photos from Tanzania.

Budget of a safari in Tanzania

For a package of 9 days, which includes 7 days of safari the usual price starts at 1200-1500 euros per person. We took the cheapest option of sleeping in tents, and we had an awesome time. We can really recommend it to everybody who likes camping and being close to nature.

Respect the natural parks, and don’t leave any waste behind.

Listen to your guide, and follow his suggestions the whole time.

Don’t call the animals, they are wild and can be unpredictable.

Remember that you are in their home of the animals, behave like a good guest.

If you plan to do a safari with kids, it’s very important to get them prepared for what a safari actually is.

– ZZZ… BOOK YOUR HOTEL IN TANZANIA – find the best hotel for you.

– BRUM BRUM… RENT A CHEAP CAR FOR YOUR TRIP AROUND TANZANIA – find the best car for you.